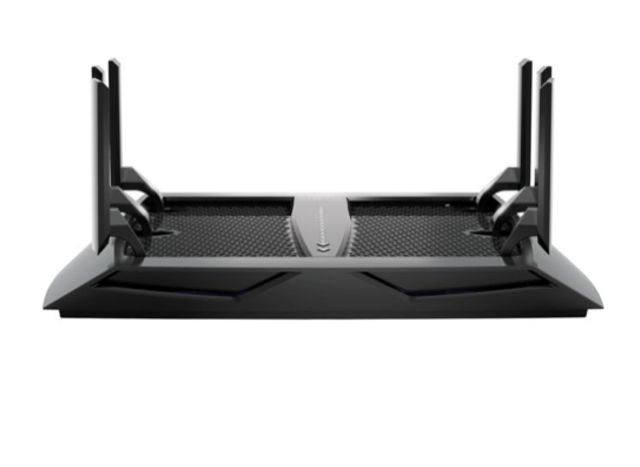 Netgear has unveiled its latest and most powerful product to date – the Nighthawk X6 – the first tri-band router that provides even faster speeds.

The 802.11ac device has three networks bands – one at 2.4Ghz and two at 5Ghz – for an even more reliable and faster wi-fi performance in your home.

Our homes have more connected devices than ever including the smartphones and tablets of every family member so the load on your wi-fi network is only going to increase.

On board the aggressively styled Netgear Nighthawk X6 is a powerful new Broadcom 5G WiFi XStream platform along with six high performance antennas.

The Nighthawk X6 is an 802.11ac router that can optimise the speed of every device on the network whether it’s the latest tablet or an older laptop.

The X6 can actually segment the slower and faster devices into the most suitable wi-fi band.

This is called load balancing and it allows the X6 to provide every device with its best opportunity for performance.

And having three bands certainly makes that even easier.

With a dual band router the high-end tasks like online gaming and video streaming would normally share the faster 5Ghz band.

Now with the tri-band Nighthawk X6, each of these can operate on their own 5Ghz band effectively giving them twice the speed than a dual-band router could provide.

Also under the hood is a 1Ghz dual core processor with additional offload processors to ensure the X6 is optimised for high performance.

Another feature of the Nighthawk X6’s 802.11ac connectivity is Beamforming technology that can pinpoint and lock on to devices on the network for a more reliable connection that works at longer ranges.

There are two USB connections on the X6 including a fast USB 3.0 port so you can access attached storage devices remotely.

The content on these connected drives can also be streamed within your home via the Nighthawk X6 to other devices like Apple TV and DLNA-enabled products.

Netgear’s ReadyShare Vault feature can also make automatic back-ups of your computers and save them to the USB hard drive connected to the Nighthawk X6.

The Netgear Nighthawk X6 AC3200 Tri-Band (R8000) is available for pre-order online today and will be available in stores from later this month. It is priced at $399.

Stay tuned to Tech Guide for a full review in the coming days.