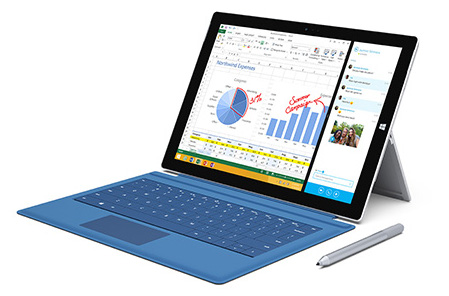 Microsoft has revealed the Surface Pro 3 – the latest and larger version of the popular Windows tablet that is powerful enough to replace your laptop.

The screen has a squarer 3:2 aspect ratio and has a resolution of 2160 x 1440 with multi-touch input to easily swipe, pinch and drag.

Users can also write directly on the screen with the new aluminium Surface Pen that offers 256 levels of pressure sensitivity for precise writing and drawing on the device.

Running Windows 8.1 Pro, the Surface Pro 3 device has a magnesium housing so it’s sturdy and but still quite light at 798g.

Also available with the Surface Pro 3 is the new Type Cover which can not only protect the screen but also offer a full keyboard with an improved trackpad to make the device useful in both tablet and laptop modes.

The Surface Pro 3 still has a handy kick stand to position the device comfortably for typing or viewing.

But this time out the kickstand can actually flex even further to offer a flatter angle for users.

On the connectivity side, the Surface Pro 3 has a full sized USB 3.0 port, a microSD card reader, a Mini DisplayPort and a 3.5mm headphone jack.

Under the hood, users have plenty of options when it comes to processors, RAM and storage capacities.

At the entry level, the Surface Pro 3 will be priced at $979 with an Intel Core i3 processor, 64GB memory and 4GB RAM.

The Surface Pro 3 is available to pre-order now from here with availability expected by the end of August from retailers including JB Hi-Fi and Harvey Norman.