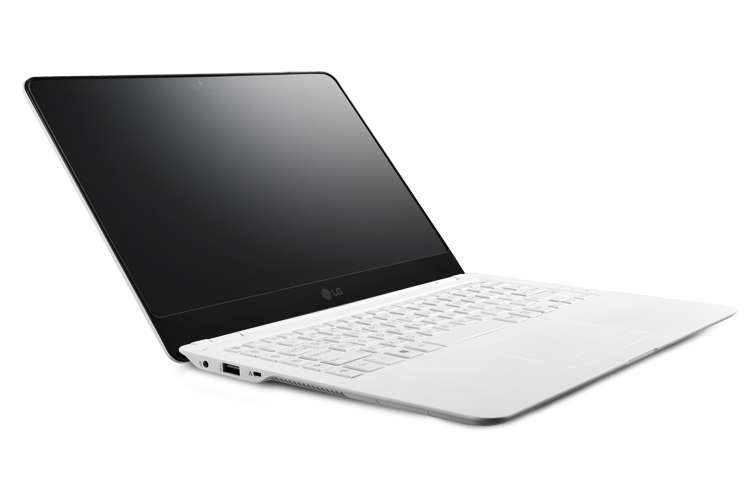 LG has made an eye-catching return to the Ultrabook space with the release of the Z360 which has a high definition screen and wafer thin looks.

The device has a 13.3-inch full high definition screen and weighs just 1.15kg.

The Windows 8 ultrabook has a clean look and design and is powered by Intel’s Core processor for added speed and responsiveness.

The LG Z360 Ultrabook has a fresh design with an all white lid and keyboard with a thin black frame around the display.

Its svelte proportions will certainly be an attraction for users – it is just 14mm thick and a featherweight 1.15kg. You’ll hardly notice its weight in your bag.

Even though LG chose to clad the device in white plastic it still has the feel of quality.

On the outside is a USB 3.0 port on each side along with a HDMI out port, headphone jack and mini Ethernet port.

On the underside curve of the Z360’s right side is not one but two microSD card slots.

These are in place of an SD card slot so users will not be able to use the same memory card as other ultrabooks including Apple’s 13-inch MacBook Air.

It also means images from a user’s camera – usually supporting SD card – cannot directly be saved to the Z360 without some kind of adaptor or image transfer to a USB thumb drive.

The keyboard is made up of square plastic keys which includes a full row of function keys at the top and a bank of keys on the left side for dedicated Windows 8 functionality.

These Windows 8 hot keys are included because the Z360 does not have a touchscreen – a more common feature with the latest Windows 8 ultrabooks.

So rather than touch the screen, users can use the trackpad to navigate the screen along with these Windows 8 keys as shortcuts. The upside is the screen won’t be covered in fingerprints.

The trackpad is hard to see and only has a thin ridge around it and the left and right buttons from the wrist rest which sports the same white colour.

It took us a little while to get used to its sensitivity and to find the thin left and buttons.

The LG Z360 Ultrabook is powered by a 3rd generation Intel Core i5 3337U processor running at 1.8Ghz with 4GB RAM and a 128GB SSD (solid state drive) onboard.

The device powers up and is ready to use in less than 15 seconds which is quite impressive. It can also wake up from sleep in a second so it’s always ready to go to work.

It is the 13.3cm display which will really catch the user’s eye. It is edge-lit LED and has full high definition resolution with IPS (in plane switching) to make it easy to view at every angle.

Users will be glad to know the screen looks great whether they’re using the device for work or play.

Also onboard the Z360 is WiDi – an Intel-powered feature that allows users to wirelessly replicate their screen on a compatible smart TV or projector to share files or presentations.

Battery performance is listed at up to 6.5 hours by LG but we managed to get just short of six hours usage during our testing before the battery gave out.

The Z360 Ultrabook is an impressive return to the laptop space for LG and will appeal to users who want a slim and light workhorse that also looks as good as it performs.

While not offering a touchscreen could be seen as a mark against it, the Z360’s screen is still impressive nonetheless.

The Z360 offers the power needed for work as well as the features that will make the product a handy entertainment device as well.