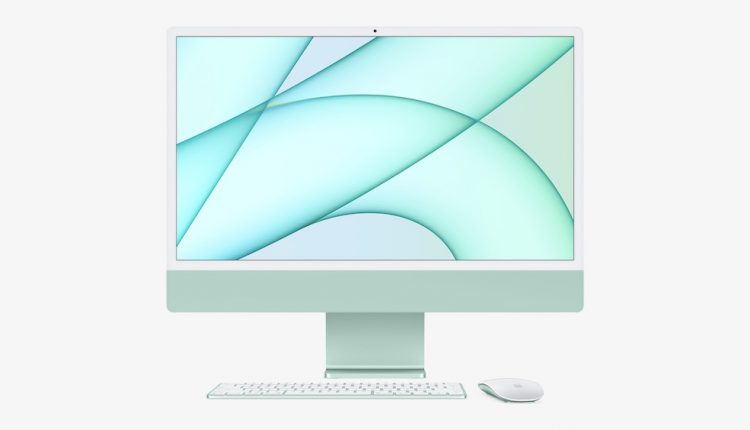 The new M1 iMac is a stunning upgrade that offers not only an incredibly slender design but a level of performance and speed to handle even your toughest tasks. If you're looking for a desktop computer that ticks all the boxes in terms of looks, performance and versatility, then look no further than the colourful 2021 M1 iMac.

Apple has recreated the magic and wonder of the original iMac with the latest version of the popular desktop computer which is now powered by the company’s very own M1 processor and available in a range of colours.

It has a striking reimagined design and seven stunning colours and harks back to the playful version of the first colourful iMacs at the end of the 20th century which declared at the time that computers don’t have to be one boring colour.

It was a hit back then and this latest M1 iMac captures the same spirit and attraction for customers who want a desktop computer they’re not going hide in a corner or in a dark room but put out on display for all to see in various rooms of the house.

And with a thickness of just 11.5 millimetres it’s not going to take up a lot of room either.

But don’t let the svelte design and bright colours take the attention away from the new iMac’s impressive performance.

Despite its bright appearance, the new iMac is a powerhouse. It has both brains and beauty.

For our review we received the purple model with 500GB storage, 8GB unified memory, two Thunderbolt ports and two USB C ports. It is priced at $2499. 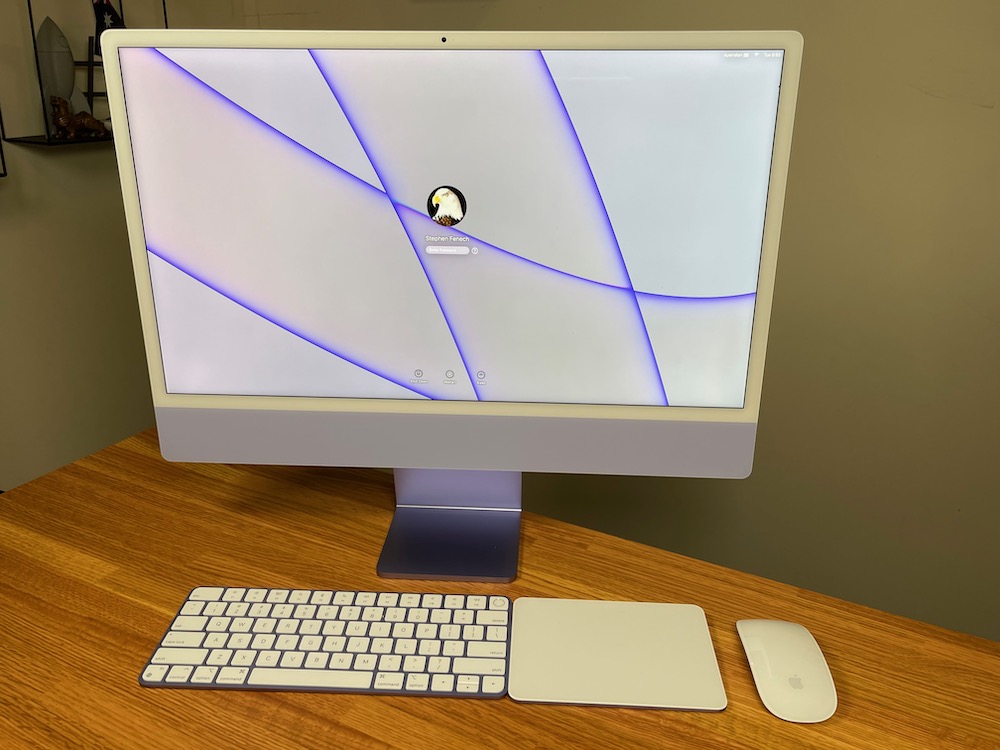 You don’t really appreciate how thin the new iMac actually is until you see it for yourself.

At just 11.5 millimetres thick it takes up very little space and has a minimal footprint which we think will lead customers to using it in various rooms of the house including the living room, bedroom and even the kitchen.

The selection of colours also makes it easier to fit your style and your decor if you do decide to display the new iMac out in the open. 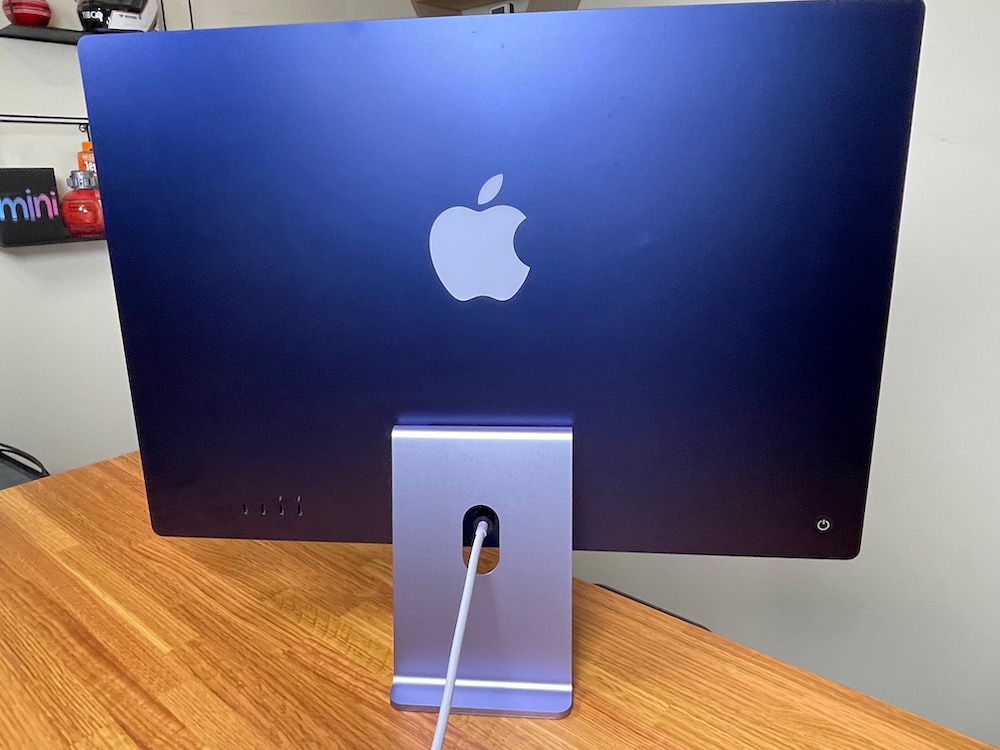 The colour is also quite impressive and Apple has matched it perfectly with the keyboard, trackpad and Magic Mouse.

Even the power cable for the iMac and the Lightning charging cable also perfectly match the computer’s colour. 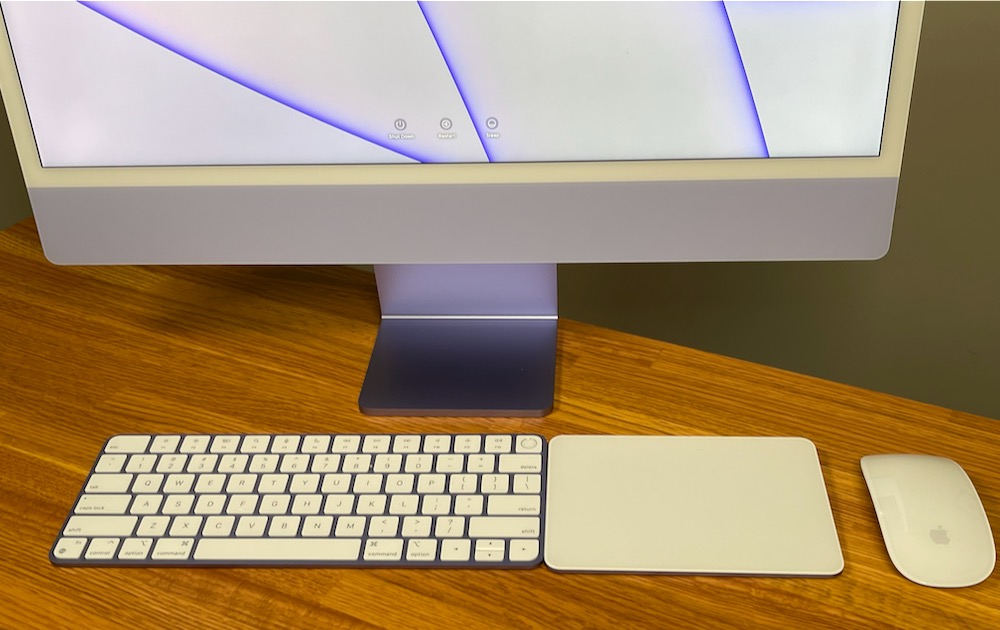 The design innovation even extends to the power brick which has a port for the power cable and also a port for an Ethernet connection in case the customer wants to connect the computer to their broadband with a cable instead of wirelessly.

Doing this means less cable clutter on your desktop. 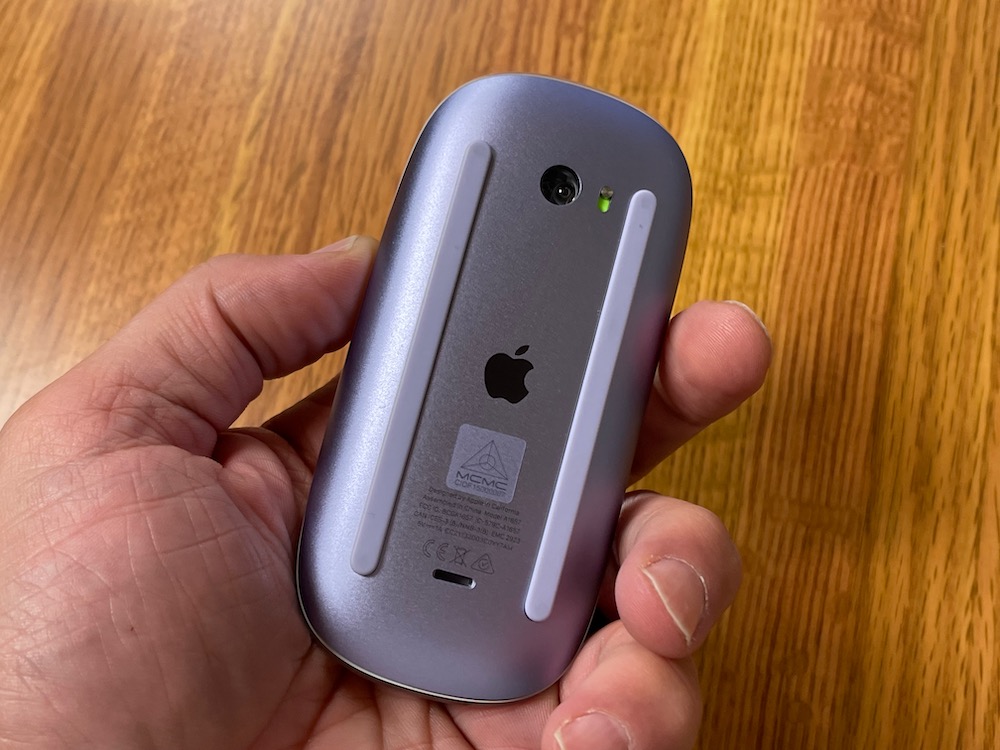 When you’re looking at the new iMac side on you can hardly see it.

it is so thin, Apple was unable to put a headphone Jack on the rear panel because the headphone plug would be too long which is why the headphone jack is located on the edge.

The M1 iMac has a 24 inch 4.5K Retina Display which is made up of 11.3 million pixels and is capable of displaying more than a billion colours.

As Apple has demonstrated over the years with its other MacBooks and iMacs, the Retina Display is quite striking so your content, that video you’re working on, that website you’re browsing and the movie you’re watching all look amazing.

it also has a brightness of 500 nits so it’s even easier to see the amazing detail and vivid colours that the display can produce. 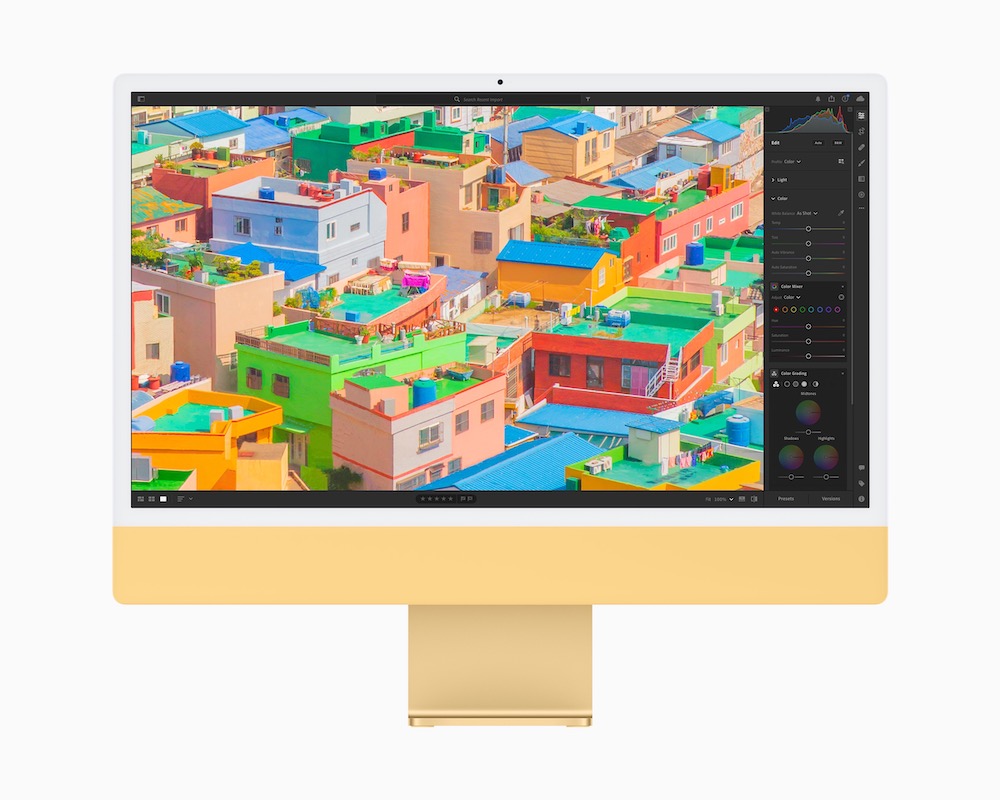 There’s also an anti-reflective coating so even in a bright room there will be minimal reflections to make the screen easier and more comfortable to look at.

The bezels around the iMac screen are also a lot thinner (they are also now white instead of black) than its predecessors so Apple can fit in a larger screen on a computer that’s roughly the same size as the previous 21.5 inch model.

Apple has now brought the M1 processor to the desktop with this latest iMac, and that’s a big deal.

We’ve already seen the amazing jumps in performance with the M1 MacBook Air and M1 MacBook Pro which we saw as the biggest improvement from generation to generation that we’ve ever seen on a computer.

Having this sort of power at your fingertips means applications will open instantly, complex tasks will be completed in seconds rather than minutes, you can work comfortably with massive files and can edit multiple streams of 4K video at the same time and a single stream of 8K. 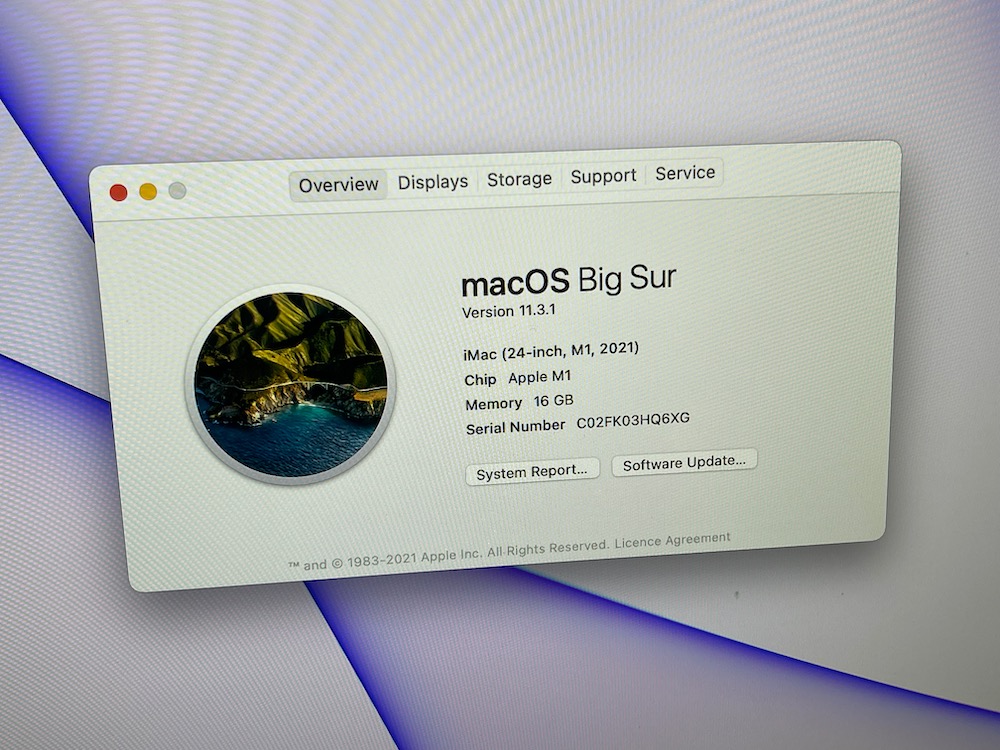 These are just some of the examples of the performance you can expect from the M1 iMac which has four high performance cores and four high efficiency cores to give it an 85 per cent improvement in performance when compared to the standard models of the 21.5 inch iMac.

The neural engine in M1 can complete up to 11 trillion operations per second which means a 3X performance boost in machine learning tasks.

We’ve all had our fair share of video calls in the past year thanks to the COVID pandemic so the FaceTime HD camera would be a feature used quite often.

On the M1 iMac the FaceTime camera has graduated to HD so you can be seen in full high-definition.

The camera now has double the resolution of the previous version along with a larger and more efficient sensor that can even handle low light situations. 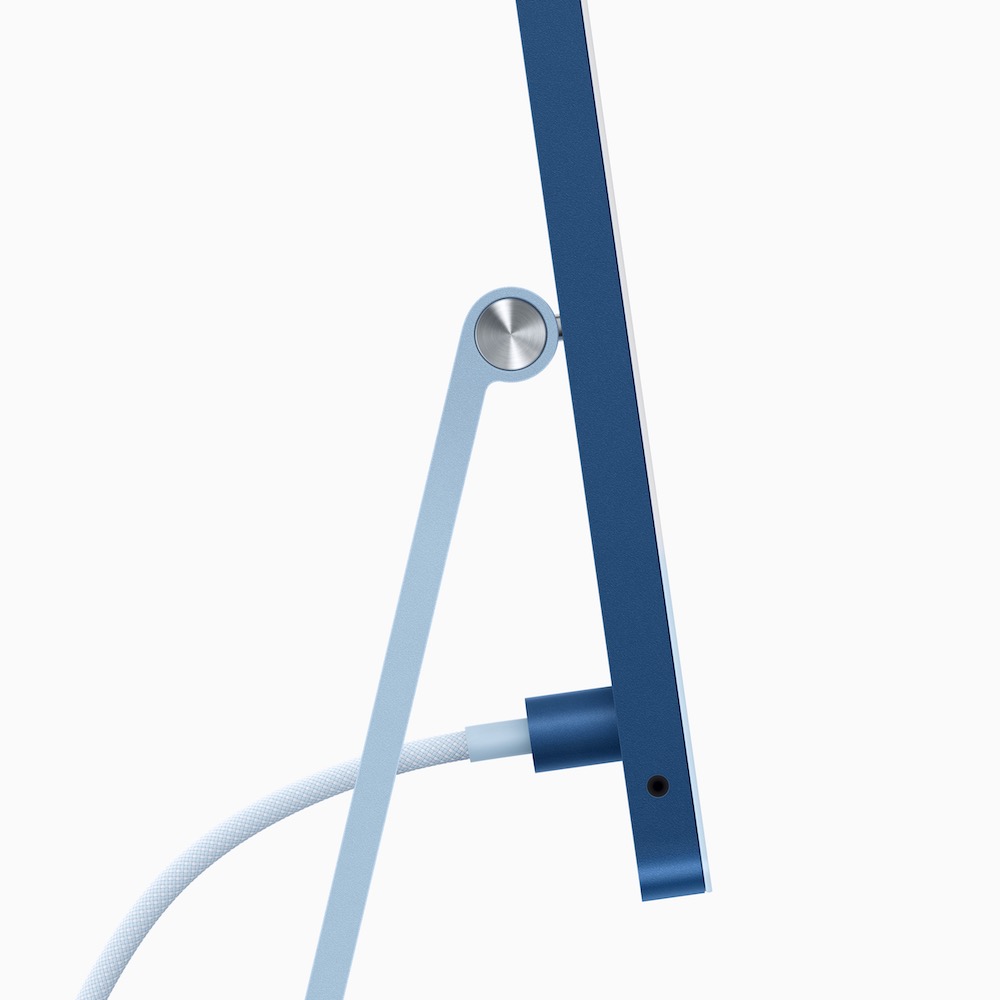 No matter the conditions, the iMac will make sure you look your best.

and not only will you look good you will also sound good as well thanks to the studio quality 3-mic array.

The microphone system actually uses beamforming technology to ignore background noise and focus in on your voice.

With the number of virtual meetings, video calls and learning from home which we are still doing post COVID, the new FaceTime HD camera on the iMac will be very popular.

It’s hard to believe Apple is able to fit in a six-speaker sound system aboard the M1 iMac along with two pairs of force cancelling woofers which are also pair balanced high performance tweeters.

The result is surprisingly high quality audio from this incredibly thin chassis.

We were pleasantly surprised with the high and mid-levels of our music on the iMac along with the punchy bass. 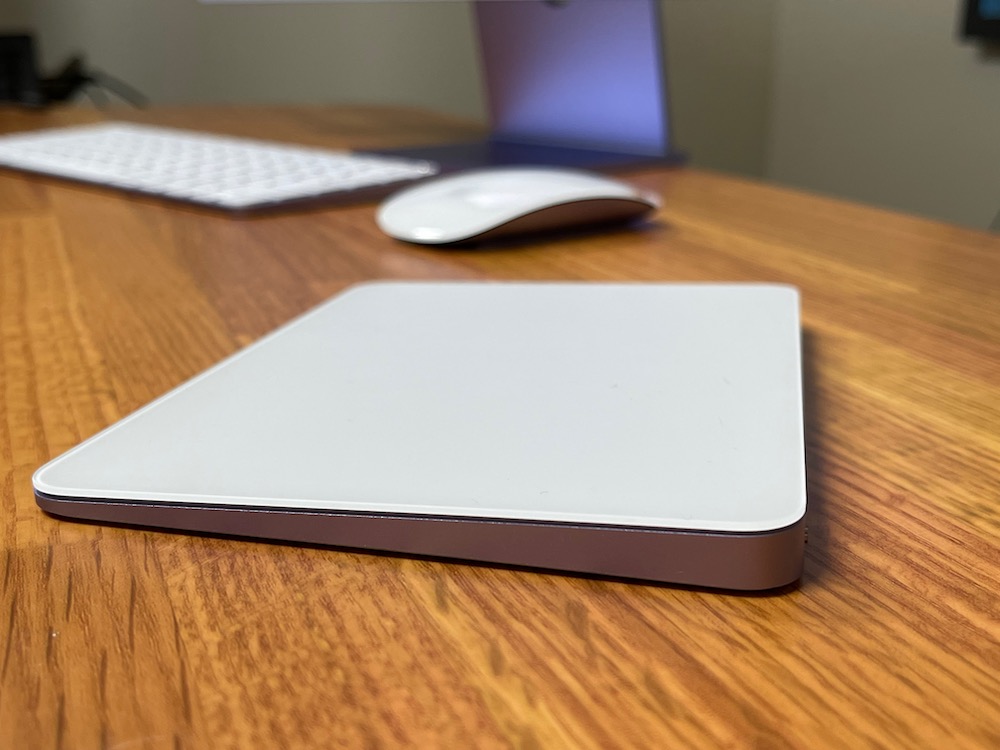 One thing you won’t need to buy is a set of speakers to make the iMac sound better. it sounds amazing straight out of the box.

Whether you’re watching content or listening to music the experience is enhanced with the superb audio quality.

CONNECTIVITY
On the connectivity side, the iMac has two Thunderbolt/USB 4 ports and two USB C ports which make it possible to connect an external monitor or two or a hard drive for your Time Machine backups.

The iMac also supports Wi-Fi 6 so if you have the latest router or mesh system you will see a definite performance boost on wi-fi that’s up to four times faster than the previous standard. 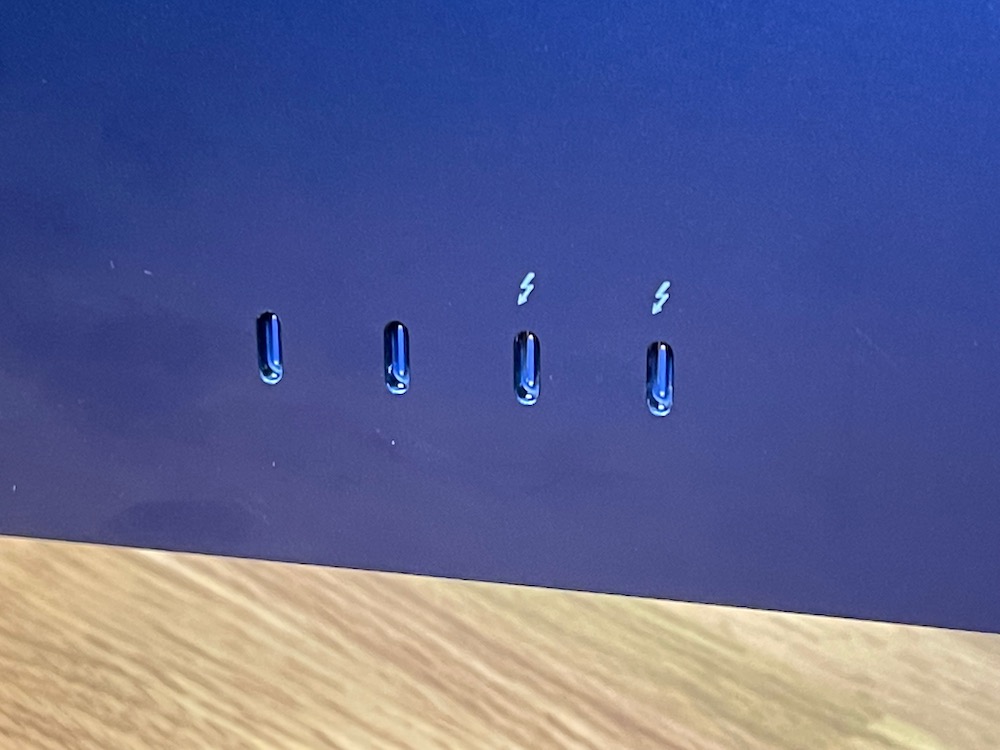 What you won’t find is a memory card slot or regular USB 3.0 ports.

We know a memory card is too thick to fit in the back of this iMac but the memory card slot could have been placed on the side of the unit like the headphone jack.

Apple’s Mac books haven’t had a memory card slot in years so it was no real surprise to see they had left this feature out of the new iMac as well.

For the first time Touch ID has been included with the iMac.

The Touch ID sensor can be found in the top right hand corner of the keyboard and offers the same convenience as it does with the MacBook and MacBook Air. 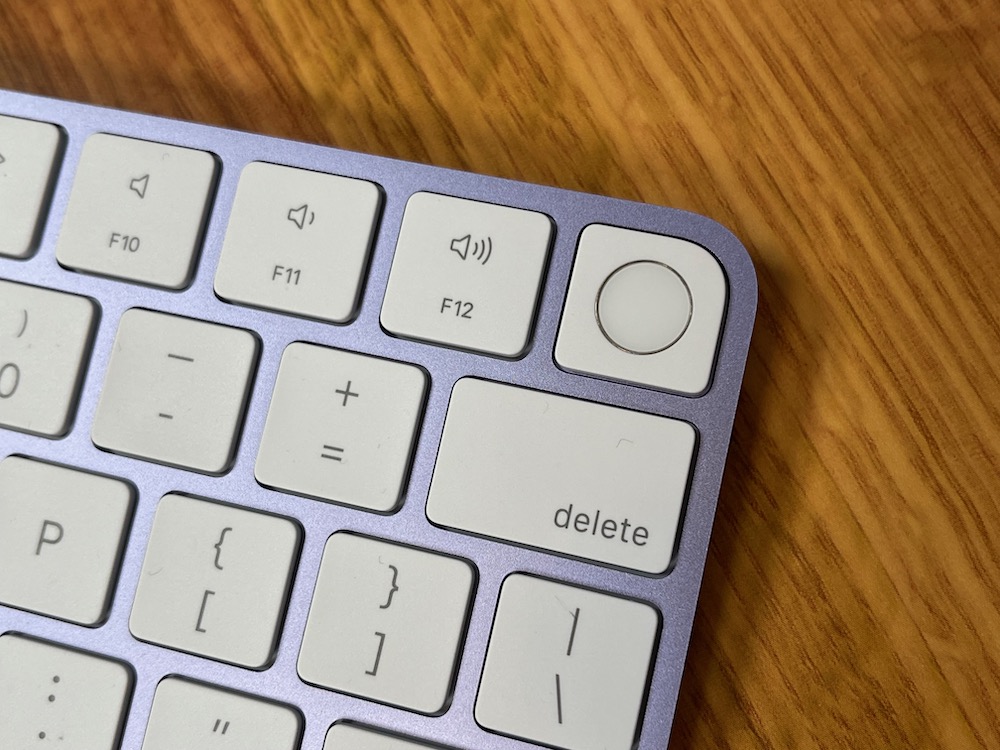 This means you can now unlock your computer with your fingerprint rather than having to type in a password.

The new M1 iMac is a stunning upgrade that offers not only an incredibly slender design but a level of performance and speed to handle even your toughest tasks. If you’re looking for a desktop computer that ticks all the boxes in terms of looks, performance and versatility, then look no further than the colourful 2021 M1 iMac.

Why the future of electric cars is bright in Australia