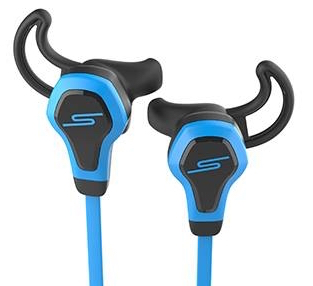 SMS Audio – owned by rapper 50 Cent – has partnered with Intel to create biometric earphones that can monitor your heart rate and collect fitness data.

The SMS Audio BioSport headphones will be able read your heart rate through a sensor while you exercise and sync with popular exercising apps like RunKeeper.

But what stands these headphones out from the competition is the fact they don’t require a battery.

Instead the headphones draw their energy from your smartphone through the 3.5mm headphone jack which Intel claims is a first for an audio product.

Intel says there is no concern about the BioSport headphones taxing the smartphone battery too heavily as they require a similar level of power as your regular wired headphones.

This new type of wearable device can also relay motivational messages from your compatible apps while it’s collecting information like calories burned and the distance travelled.

LG released a similar device earlier this year called the Heart Rate Headphones that measure blood flow in your ear to determine heart rate and link wirelessly to either a smartphone or the LG LifeBand activity bracelet.

The SMS Audio BioSport headphones will be released in Australia in the coming months with pricing to be announced closer to the official launch.