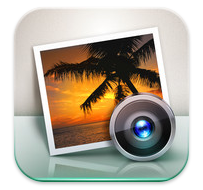 When Apple put together the mobile version of iPhoto they took a fresh approach instead of merely porting the long-standing and overworked desktop version.

For users of iPhoto on Mac there are some familiar conventions. Opening the app reveals four types of file management: Albums, Photos, Events and, something not found in the desktop version, Journals.

The first three are self-explanatory so let’s focus on the last. Journals presents a fresh way of sharing involving a selection of images that are published to iCloud.

The images are automatically arranged in an editable, asymmetrical layout that, once published, can be shared by sending a link via email or otherwise broadcasting the URL however you like.

For those of us who used MobileMe and already miss publishing albums to it, Journals represents a not-too-bad method for sharing a set of images with some measure of privacy. It’s a cool feature and I wouldn’t be surprised to see it filter into other Apple software.

On the top right of what you might call the app’s menu bar, the “Edit” button will, once tapped, lead you to an editing environment that, at first, looks under-featured but offers some terrific tools.

Among them is a rather excellent exposure tool that works along the lines of a levels adjustment slider, with shadow, mid-tone and highlight adjustments.

Otherwise, the editing set is pretty much as expected, extending to a set of Instagram-style effects such as vintage, duotone and artistic.

Yet for all its appealing features, there are some that are dumbfounding.

For instance, the export to iTunes option for sharing a Journal. Bit of a mystery, that one. What does it do? Adding comments to an image only *after* sharing it to Facebook? What?

And what’s up with the Beam tool? This is supposed to enable the transfer of images from one iOS device to another by “beaming” it over Wi-Fi or Bluetooth, but I couldn’t get it to work.

Also, being able to print is great but not if you don’t have an AirPrint-enabled printer.

Also a bit annoying is that Facebook can’t syphon thumbnails from a Journal page on iCloud, so if you paste the Journal URL into your Facebook page, you get only a thumbnail-less link.

These niggly bits are easy to overlook because they’re the sort of thing you expect to be ironed out with an update but also, and mostly, because the mobile iPhoto app, much like its desktop progenitor, manages well to combine the two principal aspects of photo management – sorting and editing.

Yes, there are other photo library managers but few that work as smoothly as iPhoto and, yes, there is an abundance (too many, in my view) of photo filter apps vying for the attention of your “buy finger” but few, if any, that can manage a photo library with the panache of iPhoto.

Apple’s done a great job here, offering a fun, easy to use app with a delightfully fluid interface that encourages you to explore the app’s functionality.

Unlike the desktop version, however, it has thanks to the App Store plenty of competition for eyeballs. Let’s hope this doesn’t lead Apple to adding and changing features that give the mobile app the kind of awkwardness that has come to compromise the appeal of the desktop version.

Apart from some minor flaws that need ironing out, this is a good app that is well worth the asking price.

* Chris Oaten is a professional photographer, and gadget reviewer, from Insight Visuals.

EasyPay app allows customers to serve themselves in Apple Stores

Foxtel launches app to watch Olympics on your tablet