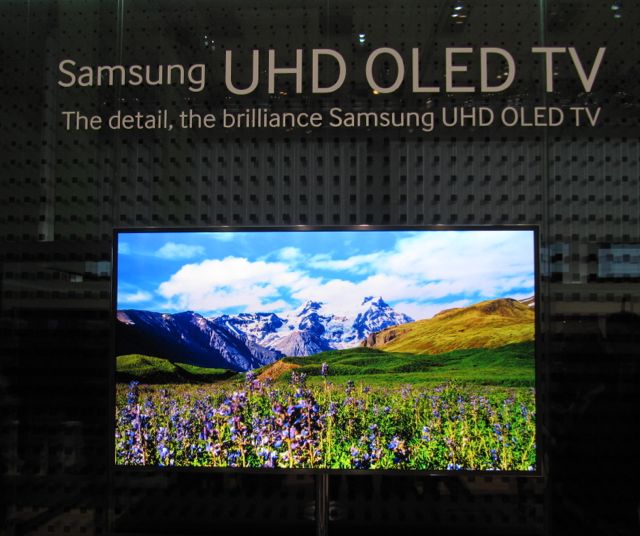 Just when you thought televisions couldn’t possibly get any better, Samsung sprung a surprise at the IFA tradeshow in Berlin with an Ultra High Definition OLED TV.

The strength of OLED is that each pixel lights itself and when it’s not lit it is pitch black.

This means TVs can be even thinner because there is no need to have a backlight and it offers breath-taking picture quality with stunning blacks and contrast levels.

Samsung has also had its best foot forward with ultra high definition – also known as 4K – with the debut of a 55-inch and 65-inch UHD TVs on the Australian market.

Now Samsung has decided to combine the best of both of these worlds with an ultra high definition OLED TV.

The prototype was unveiled on the opening day of the IFA consumer technology and home appliances tradeshow in Berlin.

The 55-inch concept product was wafer thin with a picture so sharp it should come with a band-aid.

The model on the Samsung stand at IFA was just a prototype so it didn’t yet have speakers or any of the smarts we have seen on the company’s other TVs.

Samsung even had a curved UHD OLED model in its display hall.

We can expect Samsung to produce even more of these displays to put on show at the massive annual Consumer Electronics Show in Las Vegas.

Actually Sony had a 4K OLED at this year’s CES which was one of the standout products of the show.

But when these TVs do become available on the market they won’t come cheap especially when you consider the prices of OLED and UHD are already high.

Having both types of technology in the same TV will make it almost twice the price.

But one thing’s for certain – the customers who can afford the UHD OLED TVs will have the best type of TV money can buy.