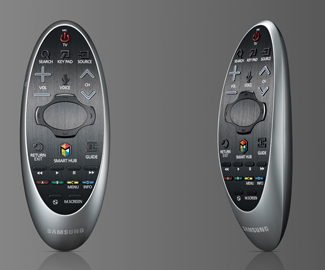 Samsung reveals the TV remote control of the future

Samsung unveils its 2014 smart TVs next week at the International Consumer Electronics but it has given us an early look at their innovative smart remote.

Gone is the standard flat rectangular design and in its place is a rounded pebble shaped device that offers complete control using buttons, a touchpad, gestures and your voice.

It has an improved ergonomic design that is aimed at fitting more naturally in the viewer’s hand.

There are a total of 26 buttons on the smart remote along with four directional keys and an oval-shaped trackpad that’s 80 per cent smaller than the one featured on last year’s model.

The 2014 Samsung Smart Remote also has voice interaction to make it easier for users to find web or video content faster.

Samsung’s voice interaction will improve even further in 2014 with an understanding of natural language that can even take note of a viewer’s usage patterns and frequently used functions.

Motions and gestures will make it easier to navigate the Samsung 2014 smart TV’s features and menus.

There’s also a Multi-Link Screen function that allow users to gather content from multiple screens to a single screen.

Tech Guide will be attending the International Consumer Electronics Show in Las Vegas so keep an eye on the site to read about the latest news, products and announcements.