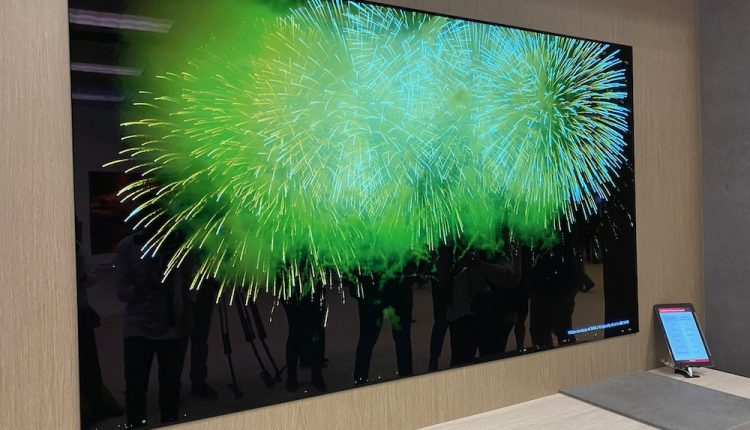 At the Consumer Electronics Show in Las Vegas the halls are filled with the latest products but we got a chance to glimpse the future when went behind the scenes to visit LG Display – the company that creates stunning OLED panels.

LG Display as a separate company to LG Electronics and supplies the company with the OLED screens for its TVs.

It also does business with other TV manufacturers including Sony and Panasonic.

At CES, the LG Display showcase which was set up in private rooms at the Las Vegas Convention Centre, offered numerous examples of the uses of the latest OLED screens and technology.

The first one we looked at was a first class cabin on an aircraft which had a 55-inch OLED panel which was used as a partition between the seat and the aisle that could display messages like “do not disturb” or “assistance required”.

But the screen can even be turned opaque to offer the passenger privacy. 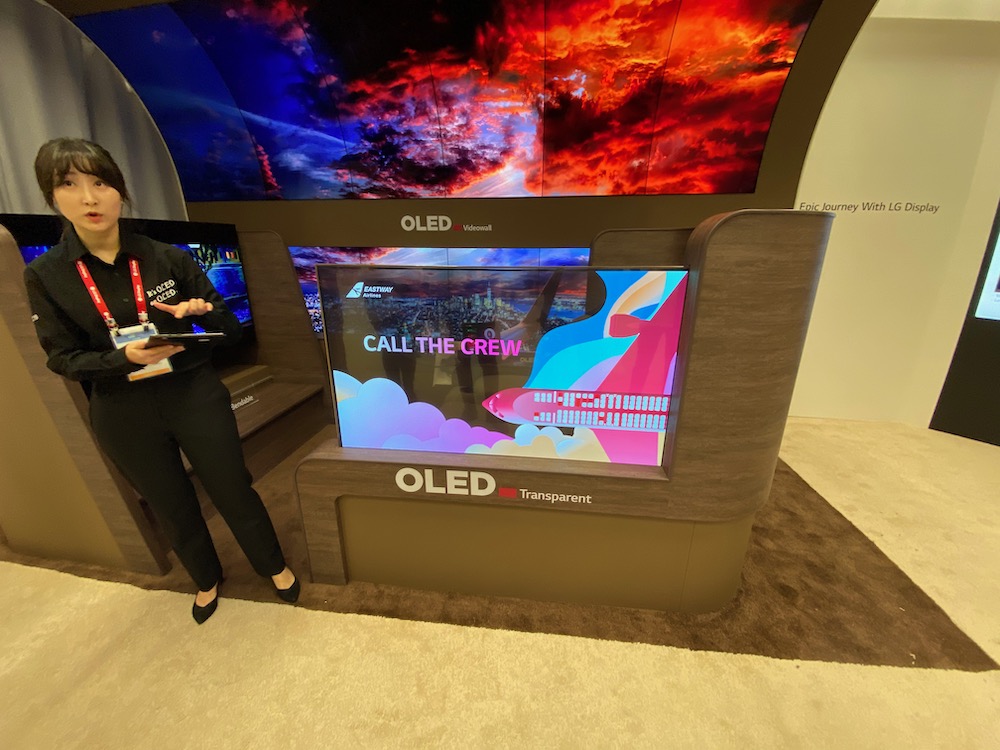 Inside the cabin the controls for the seat and the entertainment screen will also smaller touchscreen OLED panels.

At the front of the cabin was a 65-inch OLED screen which would bend to offer a more immersive experience for the passenger. 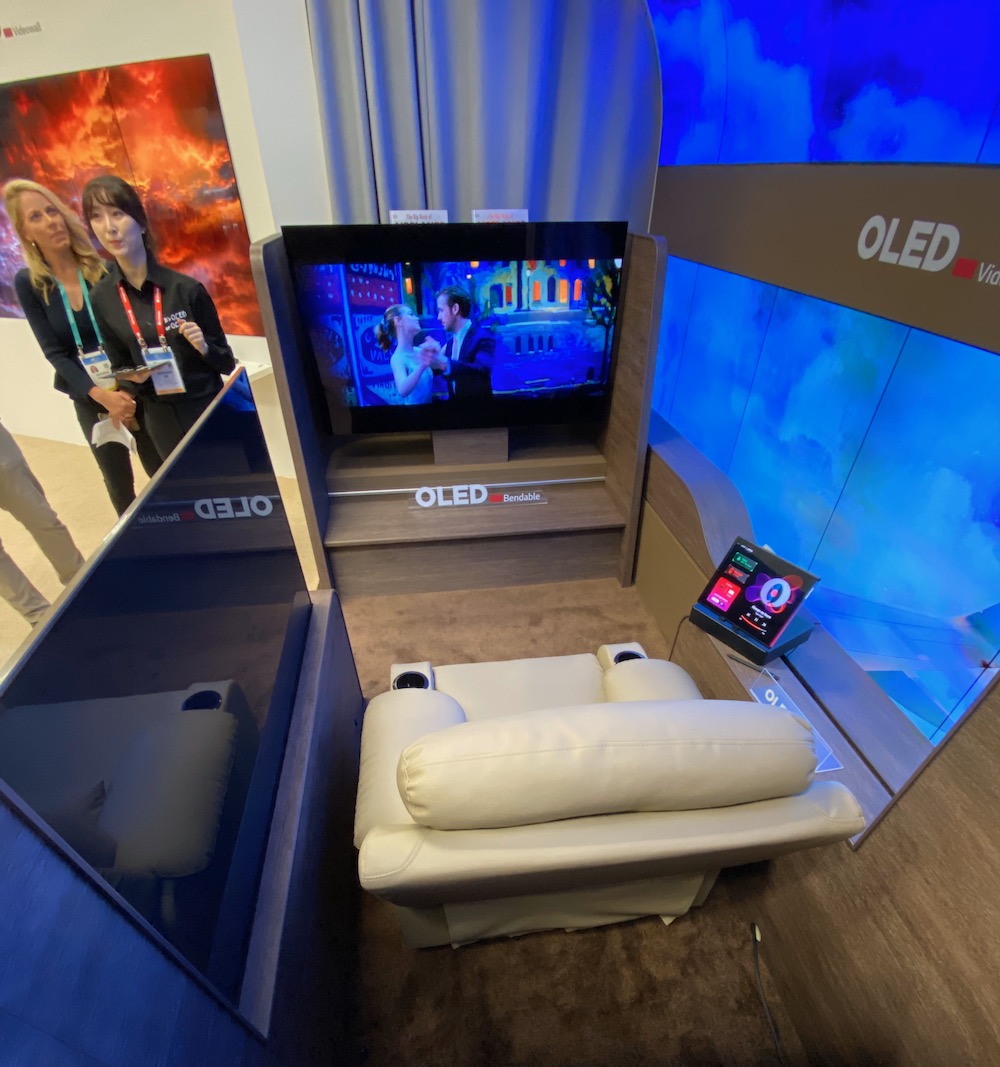 LG Display also showed us 88-imch and 77-inch OLED that aren’t just for our eyes but also for our ears.

The concept OLEDs showed not only the dazzling black levels and extraordinary colour but it was also able to produce sound directly from the screen in numerous zones.

And this is all coming from screens that was less than a centimetre thick. 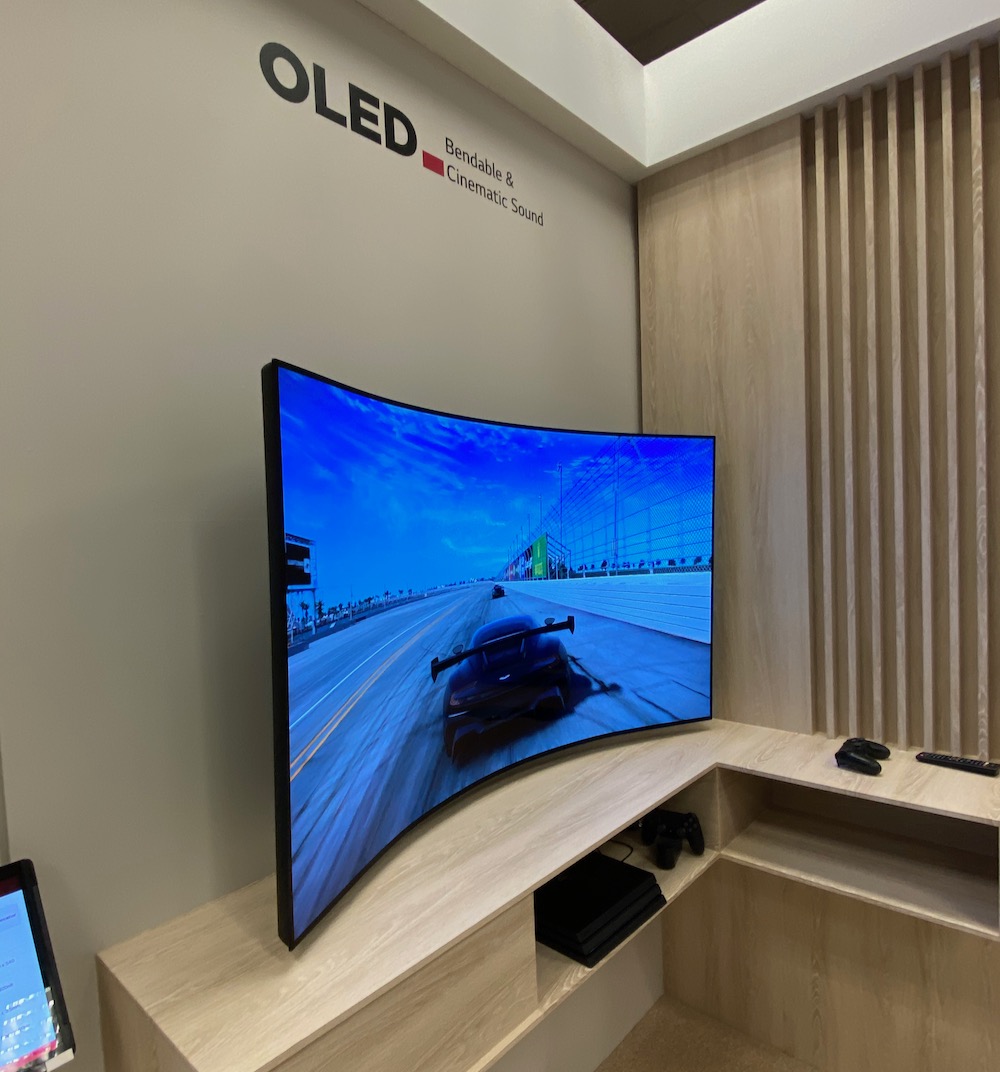 Expect to see the next LG Wallpaper TV to be using this screen which would eliminate the need for a separate soundbar.

Last year LG debuted its OLED R – an OLED screen that rolls up out of a cabinet.

LG Display showed us another version of that – a 65-inch OLED screen that rolls down from the ceiling.

We also saw examples of touchscreen OLED screens being used in vending machines and elevators. 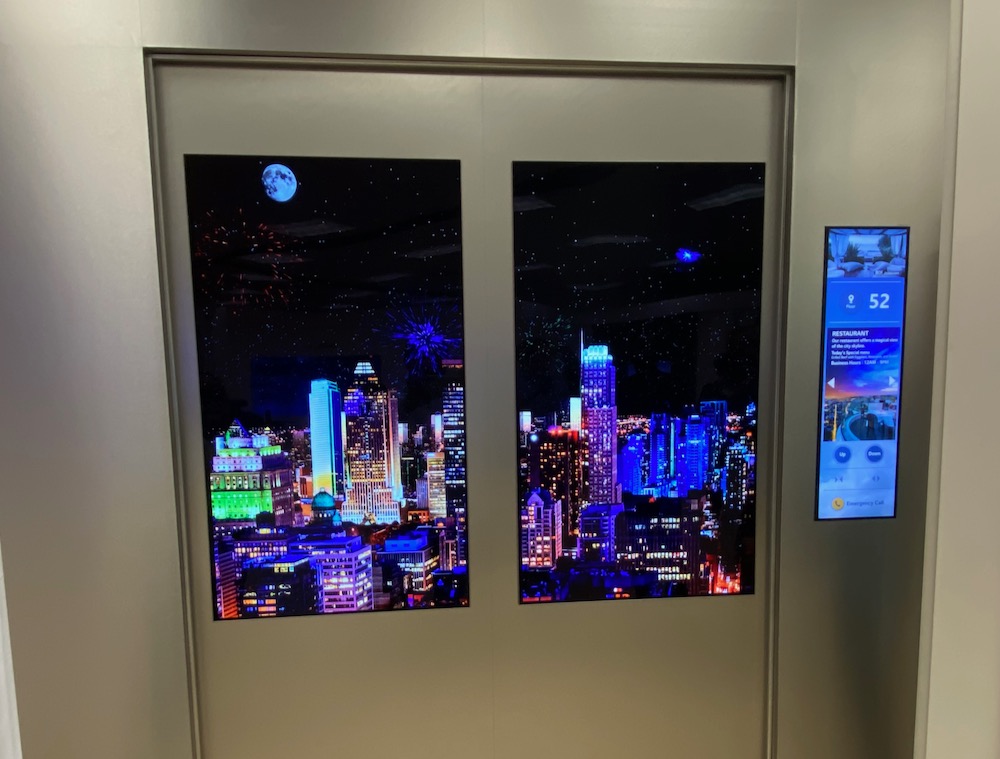 Transparent OLED can also be used in other retail situations. They can display information or show videos to the customer.

One was a clothing store that allows the customer to view the item behind the screen would also show accessories on the OLED. 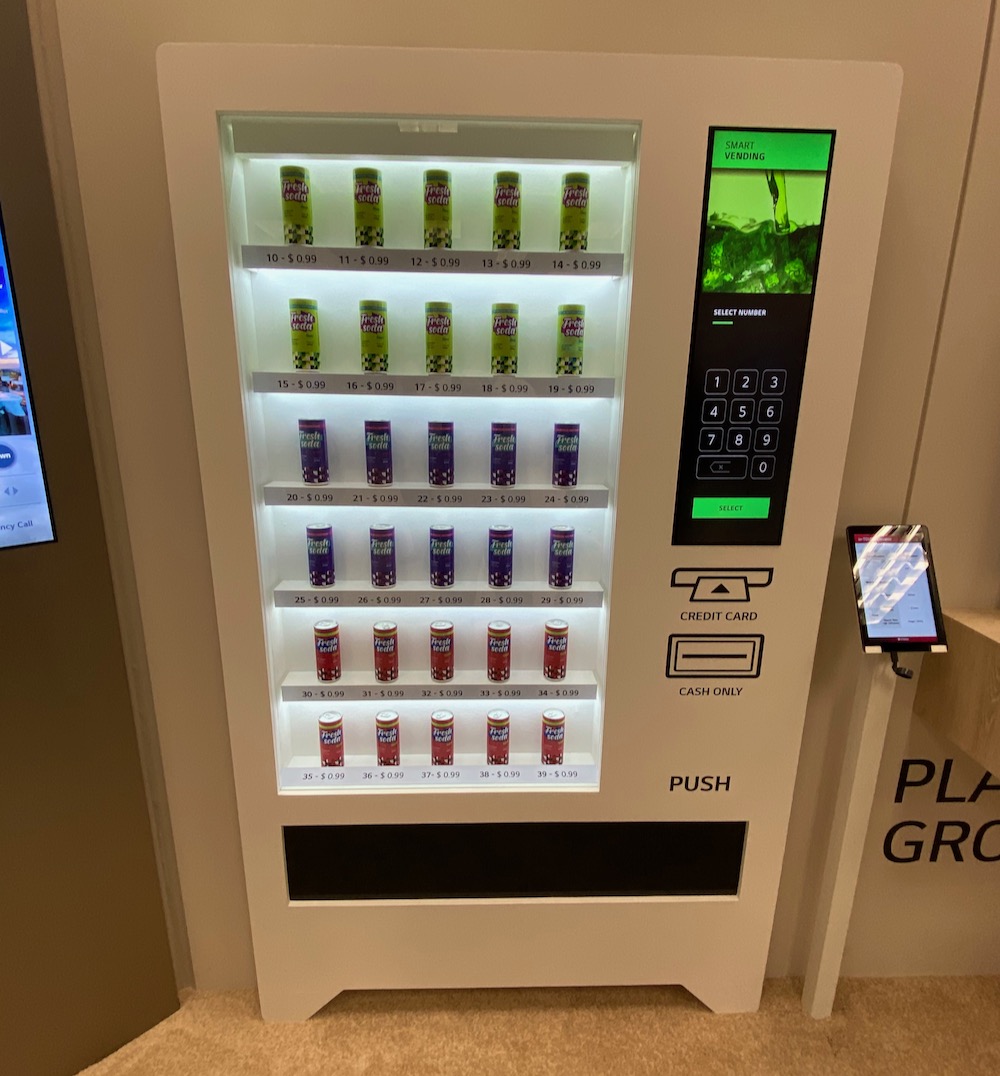 For example, you may be looking at shirts and want to see what matching tiles would look like as they were displayed on the screen.

The other example was in the furniture store which allow the customer to visualise how the sofa would look in their room and also the different coloured walls which were selected using the OLED. 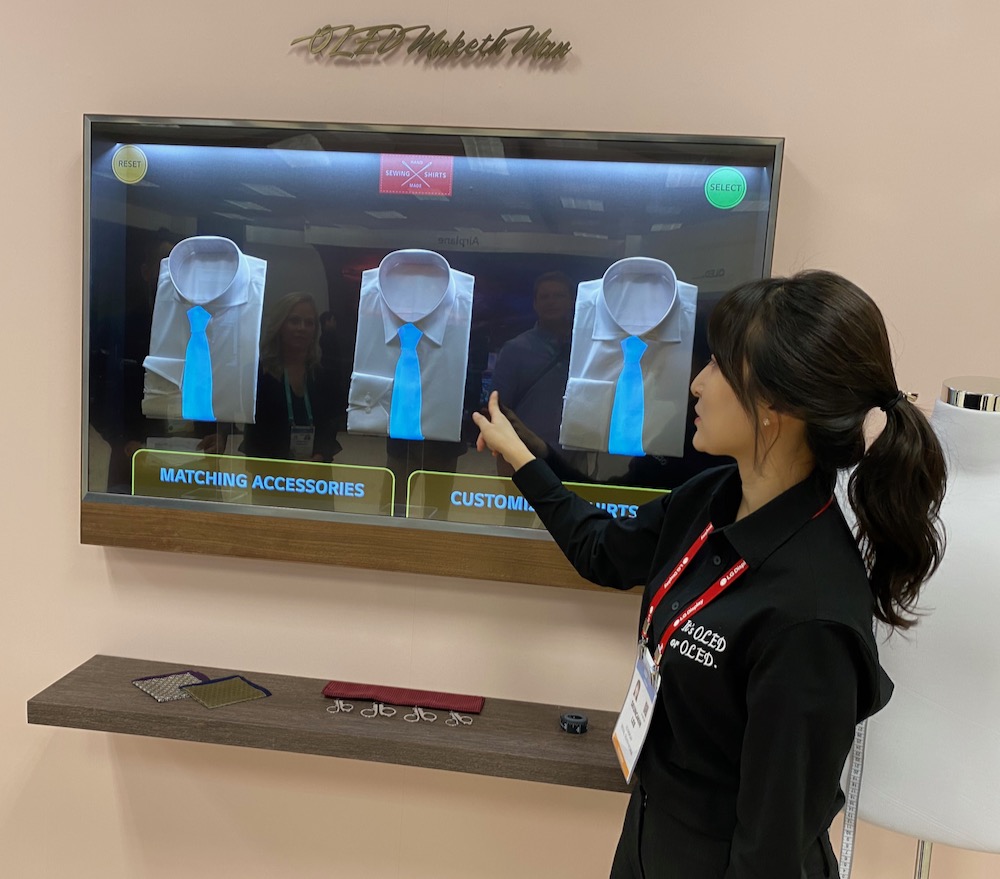 And the latest OLED technology won’t just be seen in our home and in stores but also in our cars.

The LG Display P-OLED (P stands for plastic) is extremely pliable and bendable and can be designed to fit to the shape of a car dashboard.

The interior of the car including space in front of the driver and the centre of the dashboard were covered with narrow OLED touchscreens. 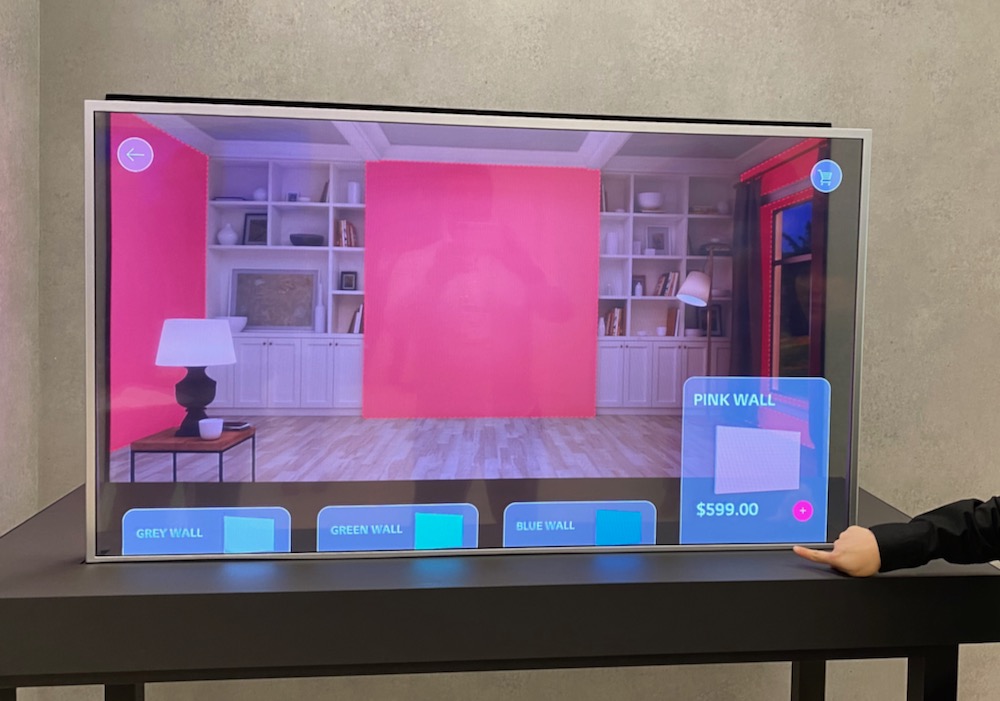 The multi-layer cluster we saw had a 12.3-inch P-OLED positioned beside a 12.3-inch transparent OLED display to show dynamic information.

There was also 12.8-inch rollable OLED display that was on the back of the driver’s seat to entertain the rear passengers. 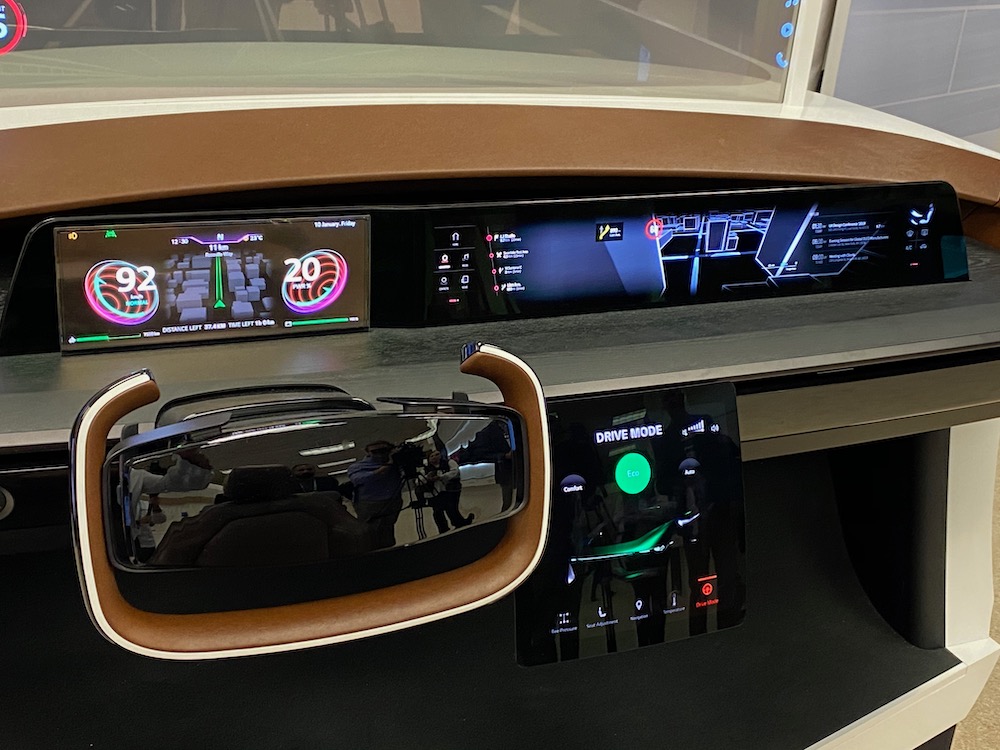 Even the side mirrors of the car mock-up inside the LG Displays showroom were small OLED screens. 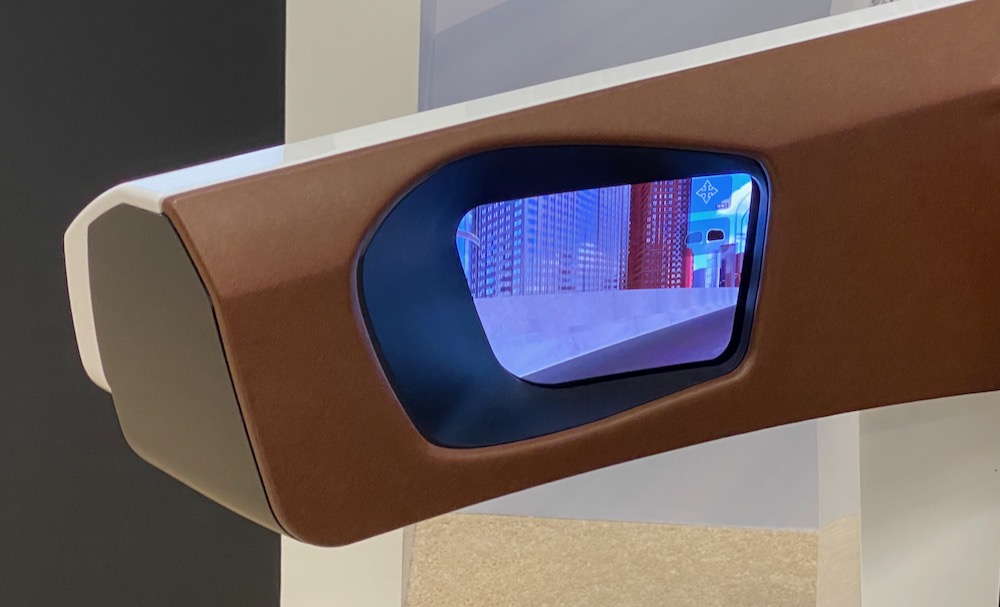 LG Display confirmed there were three car manufacturers who will source OLED for their next generation vehicles – one from Europe, one from America and one from China. 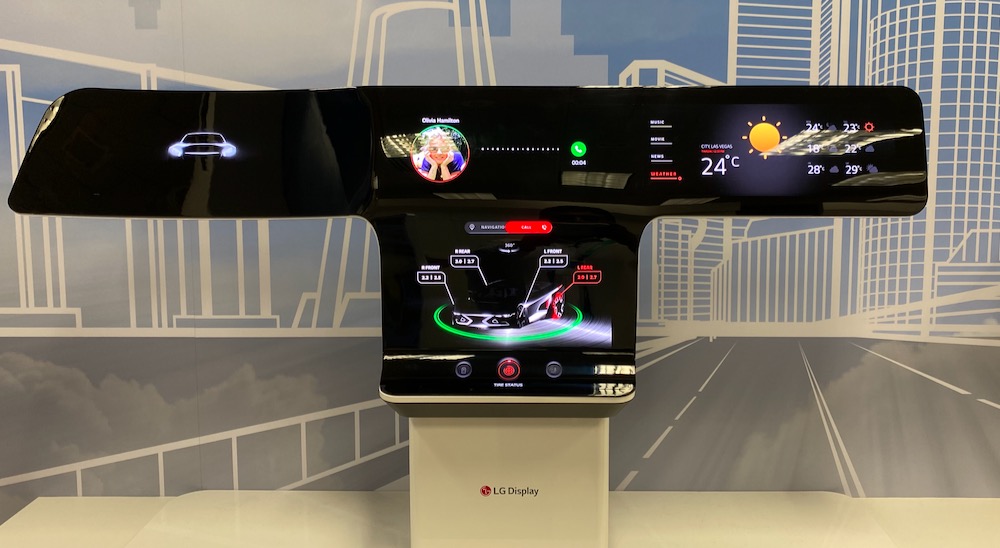 LG Display also showed their screens can be used on a smaller scale like a bendable tablet or laptop which have already been chosen by Lenovo and Dell for their first generation bendable laptops. 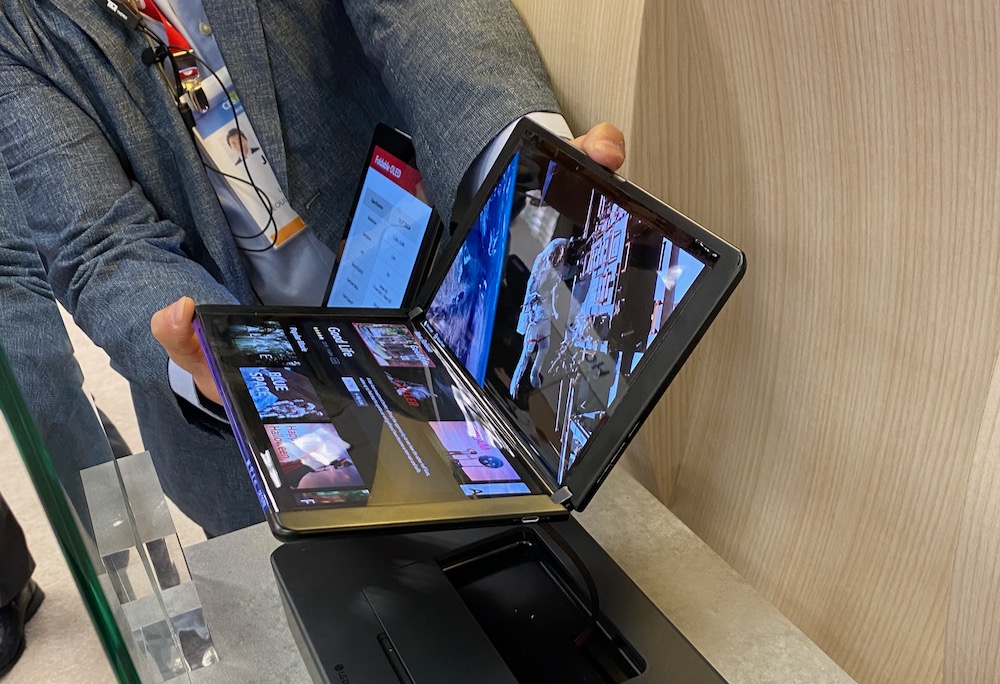