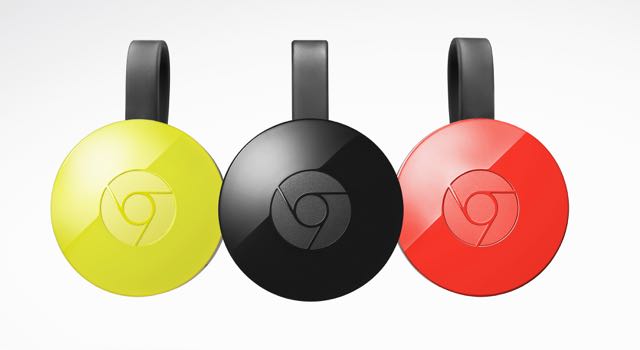 The new Chromecast and Chromecast Audio, which allows users to stream movies, TV shows, music and games from phones, tablets and computers to their TV, are available to buy in Australia from today.

The latest Chromecast has had a complete makeover and is now easier to plug in to your TV.

It now has a circular shape and has a HDMI cable that can extend and plug in a lot easier beside other HDMI sources connected to your television.

And Chromecast Audio plugs into your existing speakers through the headphone/AUX jack and turns them into wireless speakers so you can stream your music, radio and podcasts from your mobile device or laptop.

And it works with your favourite music streaming services like Spotify, Pandora and, of course, Google Play Music.

The Chromecast is priced at $59 and available from JB Hi-Fi, Harvey Norman, The Good Guys, Bing Lee and from the Google Store.

Chromecast Audio is also priced at $59 and available from JB Hi-Fi, Harvey Norman and the Google Store.

With Chromecast connected to your TV and your wi-fi network, users can use the updated Chromecast app which is populated with all the apps and content on your device that can be cast to your TV.

And there are also links to other services and apps that will also work with the Chromecast as well.

They could be streaming services like Netflix or YouTube that can now be enjoyed on any TV with a HDMI input.

You don’t need a connected smart TV for Google Chromecast to work – just a wi-fi network and a wall plug near the TV to power the device.

Apart from its new look, the Chromecast also has improved wi-fi architecture thanks to a built-in adaptive antenna system and content loads even faster.

There are also cast-enabled games like Angry Birds Go, Speedboat Paradise, Scrabble and Dance Now which can all be played using your phone as the remote control.

With Chromecast Audio, once connected to a speaker and your network, it’s possible to control your music from anywhere on your network.

It works with iOS devices like iPhones and iPads as well as Android tablets and smartphones, Windows and Mac computers and Chromebooks.

So if you have an existing stereo or speaker system, the Chromecast Audio can turn them into wireless speakers that can be controlled anywhere on your home from your smartphone.

You can still use your phone while music is playing and even take a call without interrupting what’s playing as the content is streamed from the cloud to the Chromecast Audio once the connection is established.

That means you won’t be draining your phone’s battery either.

And because it’s streaming over wi-fi, not Bluetooth, you can enjoy high quality sound.

If you have friends over, they can also cast their music to your speakers and the songs will play in order they were chosen from a queue.

The Chromecast and Chromecast Audio are both priced at $59 and available to buy today.