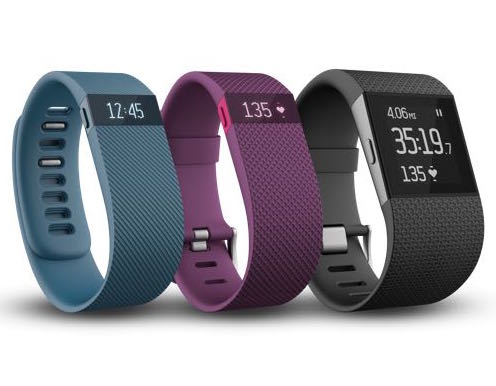 They can all link wirelessly to smartphone apps on iPhone, Android and Windows Phone.

Fitbit Charge also has a small display that can display your stats and caller IDs from your smartphone as well as a seven-day battery.

The Fitbit Charge HR has all the features of the Fitbit and adds the ability to read your heart rate 24/7 to assist with both exercise tracking but to give a more accurate calorie count for the day.

It can also display information like resting heart rate, heart rate trends along with all of the other accumulated fitness information.

This is Fitbit’s hero product that’s as much a smartwatch as it is a wearable fitness accessory.

There are eight sensors on board along with GPS for even more accurate tracking as well as the ability to record multiple sporting activities like running and cross training.

From its screen users will also see text alerts from their smartphone and have the ability to control their music playback from the wearable device.

Fitbit Charge will be available in Australia in mid-November with the Fitbit Charge HR and Fitbit Surge hitting the market in early 2015.

Stay tuned to Tech Guide for a full review of the products when they are released.

Oppo takes on the big brands with new smartphones