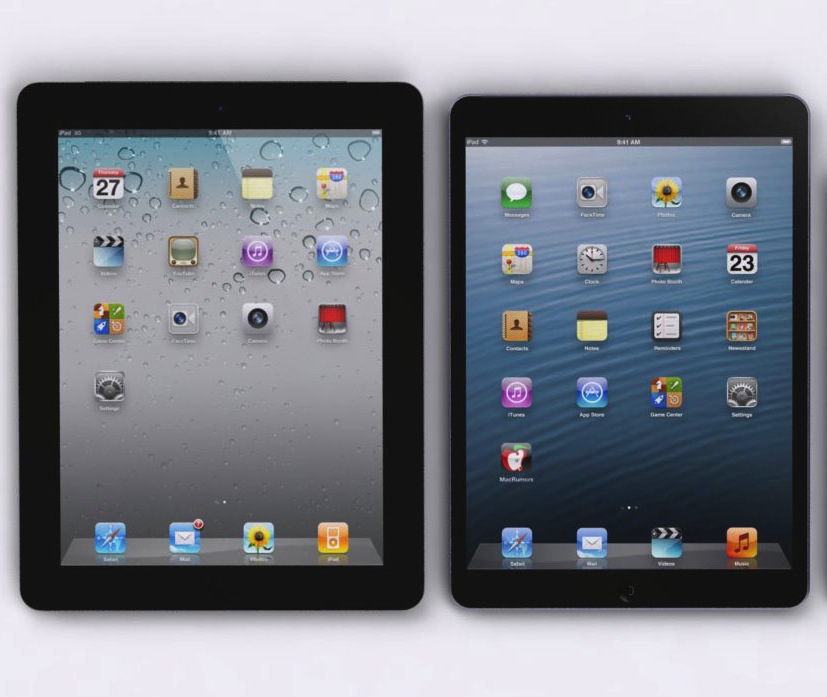 Rumour round up ahead of Apple’s iPad event

Apple is holding its launch event this week to reveal its new iPads and we’ve taken a look at the many rumours to see which are true, likely or possible.

As with any other Apple product release there has been no shortage of whispers ahead of the official reveal which will take place at the Yerba Buena Centre for the Arts.

That’s the same location the late Steve Jobs officially unveiled the first iPad to the world in January 2010.

This time out, and with four generation of iPads now behind them, Apple will reveal a redesigned iPad and a new second-generation iPad Mini.

The biggest change we will see to the new fifth generation iPad will be the design.

It will adopt the look of the iPad Mini with narrower framing either side of the screen to make the overall product from edge to edge up to 2cm thinner.

The device will also be lighter (500g down from 662g) than its predecessor and also thinner at a slender 7.5mm. CERTAIN

The iPad Mini 2 will look virtually identical to the previous model but the biggest change according to the rumours will be the addition of a Retina Display.

There has been mixed reports about this with some saying the higher resolution screen will be held back to the 2014 model.

But there are others who point out rival devices like Google’s Nexus 7 have a higher ppi (pixels per inch) count than the iPad and iPad Mini which may force Apple to go with the Retina Display on the iPad Mini after all. LIKELY

There have been reports that the iPad Mini may well follow the same lines as the recently released iPhone 5C and be released in a number of colours.

But this will mean abandoning the more premium metal construction and opting for polycarbonate instead. UNLIKELY

Apple added gold to the iPhone 5S choice of colours and it instantly became a customer favourite. There has been some speculation the new iPad will also be given the golden touch.

But while the gold iPhone 5S looks a lot classier than people expected we don’t think it will look as attractive on a larger device. UNLIKELY

The new fifth generation iPad – let’s just call it the iPad 5 – will inherit the same 64-bit A7 processor that Apple developed for the iPhone 5S so it will be faster and have improved graphics performance.

The iPad Mini will also get a new chip – a slightly different version to the one aboard the iPad 5 – called the A7X that will still make a big difference to the speed of the device. CERTAIN

Introduced with the iPhone 5S, the Touch ID fingerprint reader is more likely to appear on the iPad 5 rather than on the iPad Mini.

Reports say the home button will have the same look with the metal ring around it even if there is no Touch ID included.

But Apple is a company that likes consistency and uniformity with its products so the Touch ID fingerprint reader may be included to the iPad 5. POSSIBLE

It won’t be all about the iPad at the Apple event this week. The new Mac operating system OS X Mavericks will also be showcased with a couple of new features not seen before.

Apple will also confirm a date when the software will become available – we’re hearing it will be October 30. CERTAIN

Apple wowed the audience at the Worldwide Developers Conference in June when it unveiled the cylindrical Mac Pro computer.

Aimed at high-end users and creative professionals, the Mac Pro was promised by Apple to be released before the end of the year.

Reports suggest the Mac Pro will be in stores by late November. CERTAIN

The Retina Display MacBook Pro range – the 15-inch and 13-inch models – may also be mentioned at the event to confirm a processor upgrade to the latest Intel fourth-generation quad core processors which will not only increase speed but significantly improve battery life. LIKELY

The Apple TV has been a popular product but nothing much has changed apart from a software tweak.

Rumours vary from the addition of a digital TV tuner to a complete redesign. POSSIBLE