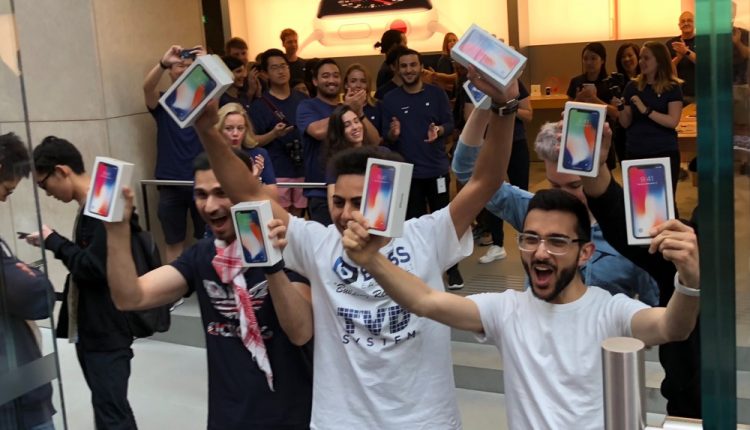 Australians customers became the first in the world to get their hands on the highly anticipated iPhone X with customers camping outside Apple’s Sydney store for up to 10 days to buy it.

There were more than 500 people in the line before the store doors swung open at 8am to loud cheering and clapping.

Because of the time difference, Australian customers got a 16-hour headstart over the US.

It was the same story outside the Apple Store in Bondi where there were more than 150 people waiting for the store to open.

The first person to purchase the iPhone X at the main Sydney Apple Store in George St was Bishoy Behman.

“It was worth the wait,” Behman told Tech Guide.

“It’s very exciting. I always been an iPhone user.”

Behman revealed he was also in the queues to be the first to buy the iPhone 7 and iPhone 8.

“This will be a whole new experience and hopefully I won’t miss the home button.”

The telcos – Telstra, Optus, Vodafone and Virgin Mobile were also swamped with customers.

A Vodafone staff member confirmed to us there would be no stock at their stores and with only a fraction of the stock to ship to customers who pre-ordered.

An angry Vodafone customer contacted Tech Guide after the staff inside – who saw the crowd of people gathering outside – didn’t bother to tell customers there was no stock for them in store until the doors opened at 8am. Some had been waiting up to two hours.

“The staff saw us waiting outside. Why couldn’t they have told us there was no point waiting because there was no stock,” the Vodafone customer told Tech Guide.

“How hard is it for someone to say “appreciate you coming down, but unfortunately we don’t have stock today’.

“What a waste of my time. Thanks Vodafone.”

Not long after the Apple Store opened in Bondi we were told there was still plenty of 64GB iPhone X models but no 256GB versions.

It was a similar story at the Apple Store in George St where 256GB models were in most demand.

From 6am tomorrow morning Apple will allow Australian customers to check stock levels for each store and reserve an iPhone X for in-store pick-up.

For those customers wanting to order the iPhone X through the website, estimated shipping times are now down to 3-4 weeks from 6-8 weeks.

No home button on the iPhone X – no worries. Here’s what you need to do