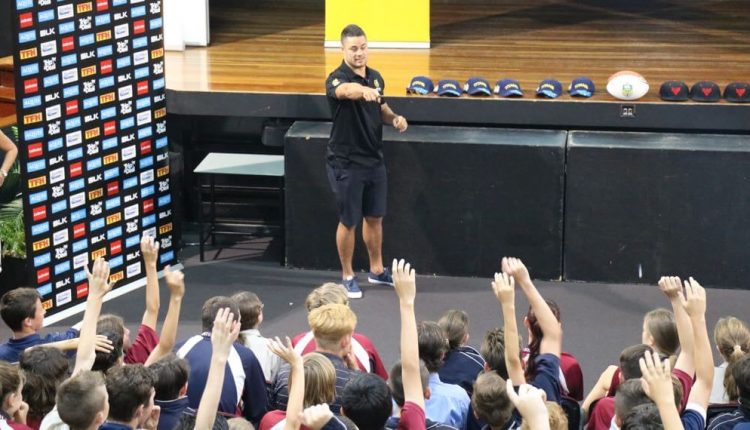 The pornography gaffe involving Norton ambassador and league star Jarryd Hayne was embarrassing to say the least but what it did was actually dramatically demonstrate the online dangers we’re all facing.

I was at Robina State High School on the Gold Coast at the invitation of Norton – our Tech Guide podcast sponsor – to see the session run by Norton’s Nick Savvides and co-hosted by Hayne.

In the audience were about 200 students – ranging in ages from 12 to about 16 years old and a mixture of boys and girls.

Hayne was greeted with applause and cheers when he entered the hall which had tiered seating, a stage and a booth at the back of the audience where I sat – it was like a mini press box and it was also where the projector was located to beam the presentation on the screen.

The idea of the session was to illustrate not only the online dangers but also to offer hints on what you should and shouldn’t be doing online.

The 45-minute conference covered things like being aware of online scams and fraud, social networking tips and privacy, our online reputation and cyberbullying.

There were also tips on creating strong passwords and treating them like your toothbrush – change them every few months and don’t share them with anyone. 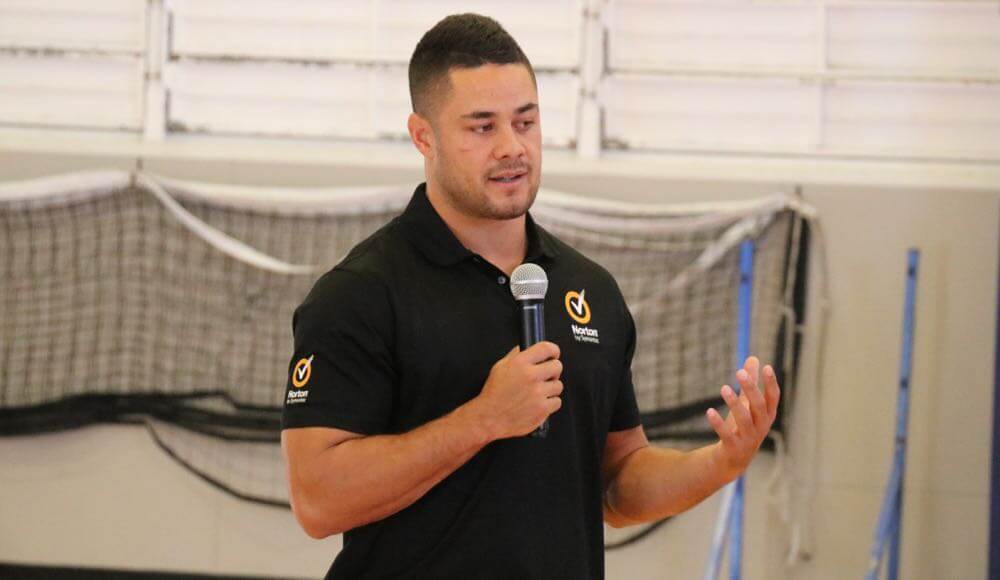 Hayne touched on the importance of online reputation and shared a great example of college students in the US being denied scholarships because of what they had posted on social media.

The message here was to think about what you write before you share it because it could come back to haunt you.

Then it was on to cyberbullying – a serious issue especially for school age children like the ones in the audience.

Norton played a video of a girl describing how her life unraveled after an innocent comment she posted online caused other girls to start bullying her online.

It was a real eye opener and showed the real effects of cyberbullying and how damaging and traumatic it can be for a victim. 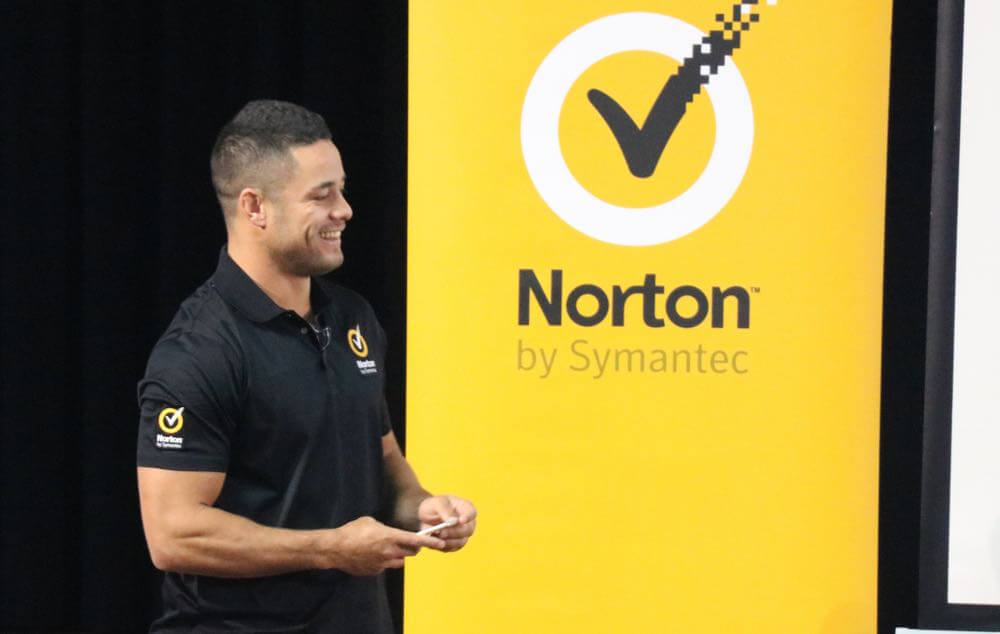 But then it as on to what Norton called a Man in the Middle attack and for this example, Savvides put up a slide showing a picture of Cowboys rugby league superstar Jonathan Thurston and his teammate Jason Taumalolo.

Thurston was trying to pass the ball to Taumalolo and then an image of Jarryd Hayne appeared to snatch the ball.

In football terms this is called an intercept and, in an open network, that’s exactly what a hacker can do to whatever you’re sharing on the internet – intercept it.

For the demo, Savvides had set up an open network and handed Hayne a phone to show that whatever he browses or looks at on his device can be seen.

And it was – there was an image of an NFL player and other lines of text that showed the sites he’d visited and passwords he’d typed in.

They were on the screen for about 15 seconds before the connection was cut off.

There was initially stunned silence in the audience for a few seconds before the students erupted in laughter.

Hayne had a look of shock on his face before laughing nervously. 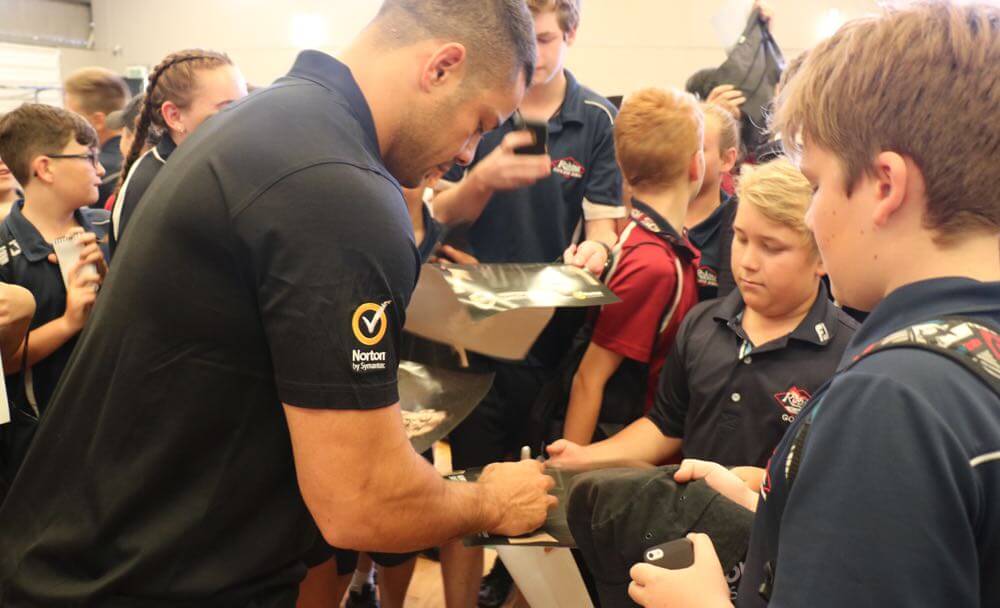 Savvides, visibly shocked by the whole thing, did well to continue by saying “that is what you call a man in the middle attack”.

But what actually happened?

That could very well have been the log-in page of a bank, an email inbox or a Facebook password.

Now to be clear that material did NOT come from Hayne’s smartphone.

Norton’s Savvides said it was a Samsung device that entered the network and that he had kept a record of the phone’s MAC address.

Hayne was clearly using an iPhone so the images definitely weren’t from his device.

Our theory is that someone else, perhaps a student in the audience, joined the open network as well and it showed their browser history.

But then the next real demonstration of what Hayne was trying to teach the students came into play in real life – dealing with online trolls and negative comments on social media. 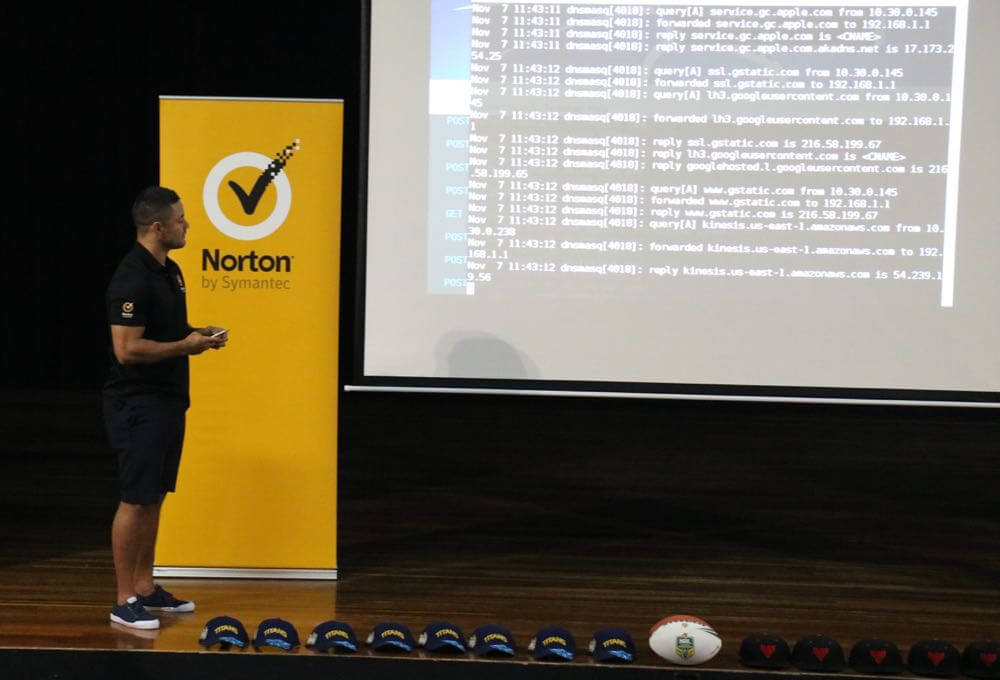 Immediately after the incident at Robina State High School Jarryd Hayne was trending on Twitter with people wrongly assuming it was Hayne’s browsing history that was displayed. WRONG.

But that didn’t stop people online sharing memes and making wisecracks and trying to come up with a zinger that would earn them likes and retweets.

Hayne actually showed a lot of class with the way he dealt with the embarrassing situation. At the school he got on with chatting to the students answering their questions and then signing autographs and posing for photos like the superstar he is.

And he didn’t respond to any of those comments and incorrect assumptions.

Now that’s class and it was a great example to those students in that school and every school across Australia.

At the end of the day – he achieved exactly what he set out to achieve despite a bumpy ride on the Hayne Plane.