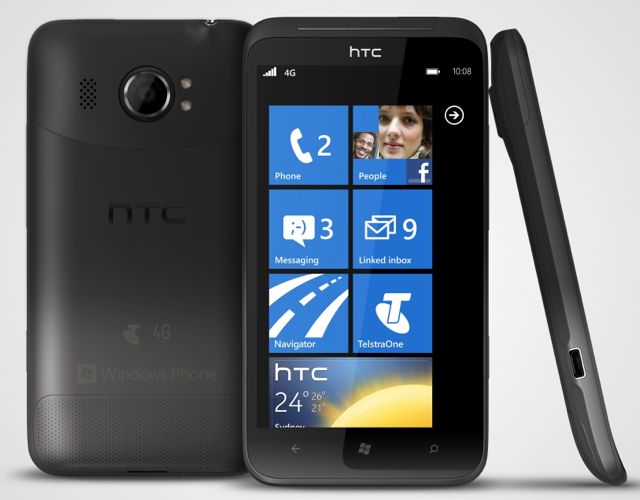 HTC has released yet another 4G handset but the Titan has one big difference – it’s running the under-rated Windows Phone operating system.

Combined with Telstra’s super fast 4G network, Windows Phone provides even faster access to your files via email or from the cloud.

And with Telstra’s 4G network growing and radiating further from capital cities and regional centres, you’ll get faster speeds in more areas.

For our use in and near the CBD we only had a 4G signal when we were in the heart of the city but still had a faster 3G experience in other areas.

The HTC Titan 4G has not gone for a razor thin design but it’s a long way from being a brick. It’s 10.9mm thick and weighs 160g. It was still easy enough to fit in your pocket.

The back of the device has a contoured look and is slightly thicker at top end near the rear camera.

On the front, you’ve got a 4.7-inch display with a resolution of 480 x 800 with soft keys just below the screen. There’s also a slight curve at the bottom so the Titan has a small chin.

Along the top is a headphone jack and on/off/lock key while the right edge has volume up/down and a dedicated camera button to make it easier to take your pictures. The left edge has a micro USB sync/charge port.

One of the biggest features aboard the HTC Titan 4G is the Windows Phone operating system.

If you are living or working in the Windows ecosystem then this device gives you even easier access to read and edit files created with Microsoft office and easy connection to Microsoft’s cloud services like SkyDrive.

Of course the system itself runs the phone quite elegantly and there is a growing number of apps for the operating system as well with all of your favourites already available.

The camera is an impressive 16 megapixel with dual flash, auto focus and a sensor for improved low light images.

And while 16 megapixels sounds like a lot of camera, the main benefit is being able to produce a large file but does not always result in a better picture.

With the Titan 4G it wasn’t. It took good quality pictures but not as good as the iPhone 4S, Samsung Galaxy Note or the Galaxy S III which all have 8 megapixel cameras.

And even though it has 16 megapixel resolution, the HTC Titan can only shoot 720p video – not 1080p.

Connectivity is going to be the main motivation for people looking to buy the Titan 4G and the speed of the network can be put to good use as a personal wi-fi hotspot to connect your devices like tablets and laptops when you’re on the go.

Despite having a single core 1.5Ghz processor, the HTC Titan 4G is still pretty fast with hardly any lag navigating the menus and accessing apps.

But the main speed users are interested in is the speed of the device on the 4G network.

When we did get a good 4G connection in the CBD we had download speeds of up to 27Mbps. But even on 3G we had faster speeds thanks to the dual channel HSPA+ technology which is like doubling up the 3G radios for increased speeds.

On the battery side, the HTC Titan 4G got us through a full work day.

But the days when we were using the device as a 4G personal hotspot and connecting our laptop for extended use, naturally the battery took quite a hit and we’d have to reach for the charger by mid to late afternoon.

The HTC Titan’s claim to fame is the fact it is the first 4G Windows Phone in Australia and has lots of appeal to those who need a solid work phone that offers high speed connectivity and seamless access to their data and documents.

While the device may not seen as glamorous as an iPhone or Galaxy S III, the HTC Titan 4G is a real workhorse that provides the 4G speeds these others cannot match.

Three and half stars (out of five)