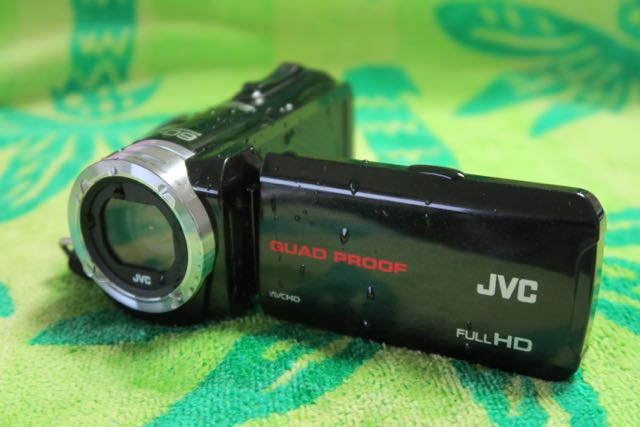 When we want to shoot video we usually reach for our smartphone but if you’re in or near water that’s not possible which is where the JVC HD Everio GZ-R10 comes in.

The JVC device looks like most other camcorders on the market complete with a flip out 3-inch touchscreen to control the camera and frame your shots.

But the JVC HD Everio GZ-R10 full HD 1920 x 1080 camcorder has one major difference to these other camcorders – it’s completely waterproof.

It combines the versatility and ruggedness of a GoPro with a traditional camcorder complete with plenty of features and a lens that can handle up to 60x zoom.

The device has a handstrap on the right side that comfortably fits the top of your right hand through it while still being able to reach and operate the zoom and recording buttons.

This screen can be angled and rotated and even flipped 180 degrees so the person being filmed can watch themselves.

The touchscreen is not as responsive as the one you’ll find on your smartphone but it’s still not too hard to navigate the menu.

At the back of the product is a sealed compartment that contains the SD Card slot, the HDMI out port and the microUSB charging port.

The fact it looks no different to other similar camcorders had us questioning whether it was actually waterproof or not.

In fact we had to double check the box the JVC HD Everio came in to put our minds at ease before we took a swim with it.

There is no added case or cover. The JVC Camcorder is completely sealed and can actually go to a depth of five metres for up to 30 minutes.

The device easily fits in the palm of your hand which means it’s not too much of a burden to take it with you anywhere.

It’s labelled Quad Proof because, apart from being waterproof, the JVC HD Everio is also dustproof and shockproof (it can handle a drop from a height of 1.5m) as well as freezeproof (it can still operate at a temperature of -10 degrees).

So you know the JVC HD Everio can handle whatever you throw at it. 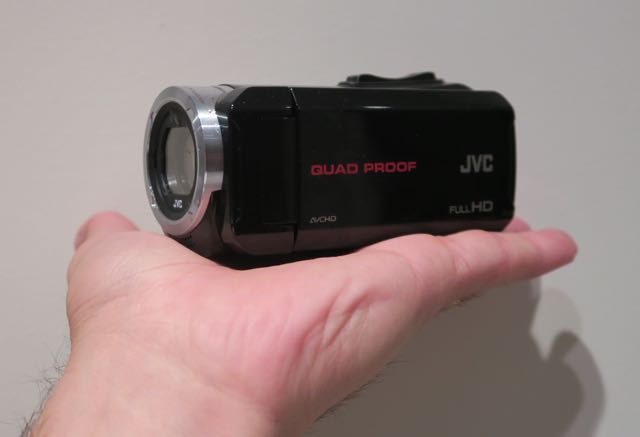 Operation is pretty simple. There’s actually no on/off switch – the JVC HD Everio is activated when you open the flip screen.

That means there’s no way to operate the camera with the screen closed.

Using the device in the water and underwater is as easy as it is above the water. And there’s no worry if it slips out of your hand – the JVC HD Everio floats.

It’s a bit too big to take with you in the surf while you’re riding a board or taking part on some other extreme sport.

The JVC is for casual filming in any location and situation so it you’re thinking you can strap the HD Everio to yourself and capture your adventures you’re going to be disappointed. That’s what Go Pros are for.

Picture quality is not quite as high as the latest smartphones – but it’s still respectable. 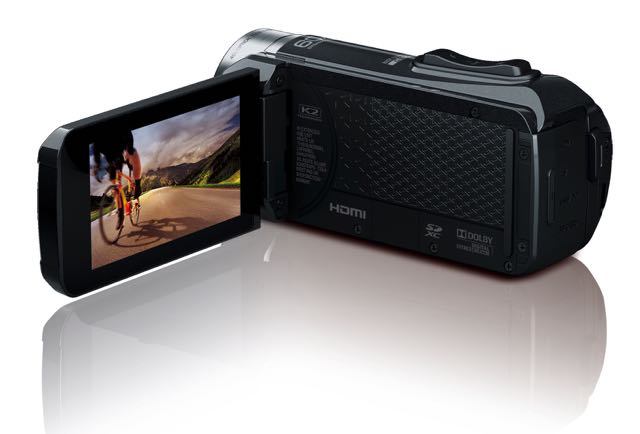 What you get with the JVC that you won’t get with any smartphone or action camera is the 60x zoom lens that lets you get really close to your subjects without much compromise in the video quality.

The lens combines a 40x optical zoom and throws in an additional 20x digital zoom as well.

Colour reproduction with the device was decent but colours lacked a little warmth and brightness.

Another problem area for the JVC HD Everio was motion. When panning the picture seemed to break up a little but this was only a minor issue that didn’t detract too much from what you’re shooting.

The JVC HD Everio is an impressive camcorder that’s useful no matter where you go and what sort of conditions you face.

While it doesn’t have the appeal of a Go Pro or a smartphone when it comes to shooting videos it does have features that can’t all be found in one of these rival products – a nice zoom lens and the ability to go underwater.

If you’re looking for a durable family camcorder that can handle the bumps and scrapes and still produce decent results then the JVC HD Everio is worth a look.