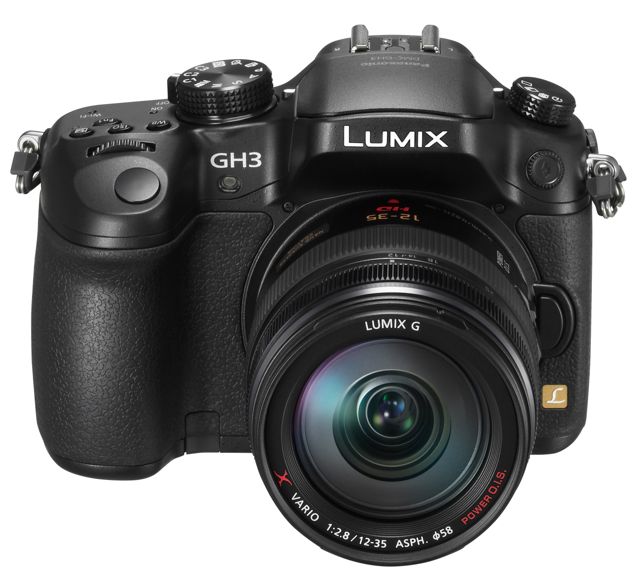 The company staged an exclusive media event in Sydney last week with legendary surf filmmaker Jack McCoy (a Lumix ambassador) and Australia’s most trusted journalist Ray Martin (not a Lumix ambassador) to sing the praises of this camera.

Panasonic let the gathered media loose around Circular Quay armed with a GH3 and, in my case, the new G X Vario 35mm-100mm f2.8 lens. The camera and lens made a great combo.

So here are the killer features.

First, a silent shutter. I wish I’d had one of these on set last weekend while shooting movie stills. I’d have been able to capture during live takes without fear of any shutter sound spoiling the audio capture.

Then there’s the OLED live viewfinder and free-angle rear monitor, each of which display bright, crisp, saturated colour that’s actually better than the real thing.

I can imagine a lot of users over-saturating their images in post to make them look as good as they thought they were going to be based on what they saw on the camera’s monitor. So people, listen up… go easy with that saturation slider.

An instant preview in the viewfinder is Awesome with a capital A.

The intuitive top panel layout comprised of a shutter with three buttons behind it controlling white balance, ISO and exposure compensation, plus two thumbwheels independently controlling shutter speed and aperture.

I didn’t need to take my eye away from the viewfinder to check settings or capture results. This is a great way to shoot.

The short time made available for a trial run with the GH3 didn’t allow for testing another killer feature: heatproof video capture.

Panasonic claims the GH3 will not overheat, regardless of how long you capture video.

I imagine any filmmaker who’s had a production grind to a standstill due to an overheated DSLR camera will be falling over themselves to put the GH3 through its paces.

They can certainly be sure of good results. Both McCoy and Martin screened short HD reels captured with the GH3.

Impressive vision it was, too. Martin even played a trick, asking journalists beforehand to pick the scenes shot on a conventional TV broadcast camera. After it screened, he revealed they didn’t use one. It was all done on the GH3. Nice one, Ray.

As for vital statistics, the DMC-GH3 captures to a 16-megapixel Live MOS sensor boasting a wide dynamic range with a default ISO range from 200 to 12,800 but this can be extended to 25,600.

Panasonic’s Venus Engine image processor has been enhanced to achieve “superior” noise reduction. I tried a few shots at ISO 1600 and they looked cleaner than anything yet seen off a Micro Four Thirds sensor.

Other features extend to the sort of things you would expect to find in a DSLM these days: 6fps burst mode (20fps in low-resolution), HDR mode, Face Recognition AF, touchscreen focus, that sort of thing.

A couple of features you may not expect are a magnesium alloy chassis and an intervalometer. Also, it’s watertight and dustproofed, so you can take into harsh shooting environments with confidence.

All of this imaging goodness is going to cost you, though.

The pricing on that twin lens kit brings the GH3, in simple terms, into contention with DSLR camera gear, which may require some buyers to consider their options very seriously.

I tell you what, though… in all honesty, this is the first DSLM camera/lens I’ve used that has made me question the supremacy of my DSLR kit once the GH3’s compactness, light weight and feature set is taken into account.

The bad news is the GH3 doesn’t land in Australia until January, so here’s a tip for anyone thinking about buying camera gear for Christmas. Don’t buy any hardware. Buy yourself or a special person a camera store voucher instead, because if you’re spending on this category of shooter, you’ll want to hold out for the GH3.