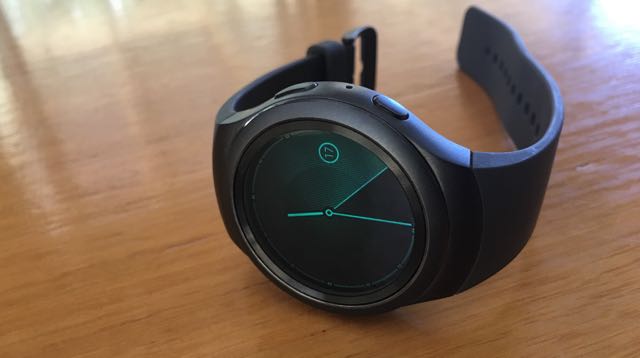 Samsung Gear S2 review – a fresh approach to the smartwatch

Samsung’s re-designed Gear S2 smartwatch was released a few weeks ago and it is the company’s latest attempt to hit the sweet spot in a category that’s really gaining momentum.

Samsung was one of the first to release a smartwatch and a few devices later it has run between Android Wear and its own proprietary system that would only work with Samsung smartphones.

Meanwhile in the blue corner, the reigning heavyweight champion appears to be the Apple Watch with its dedicated operating system and developers lining up to create apps for the device.

What we’ve seen with Android Wear smartwatches is brands jumping in to the market with the only differentiator being their shape and design. 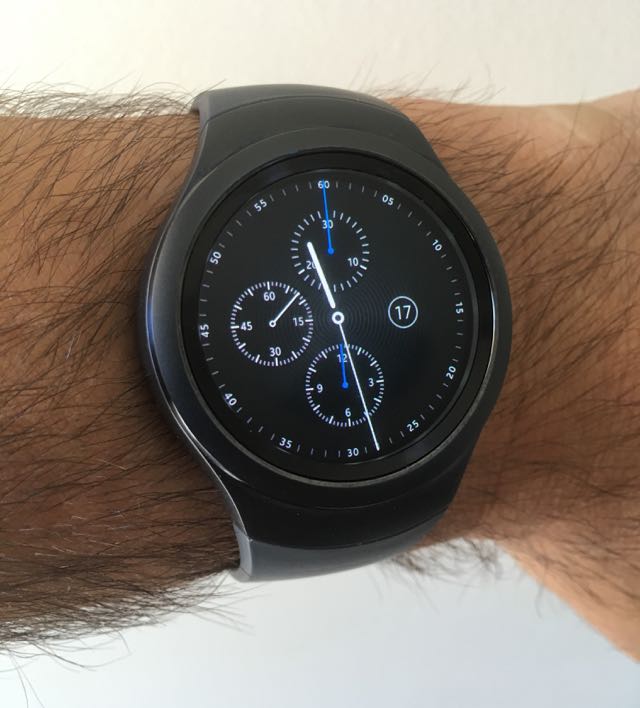 Enter Samsung’s Gear S2 which has changed both in shape (previous Samsung smartwatches were square) and operating system.

The Gear S2’s circular AMOLED screen is a dazzler it is complemented by its own Tizen operating system – similar software also runs on Samsung’s TVs.

Tizen gives the device a refreshing new look and feel but the downside is a lack of third party apps.

From a design perspective, the Samsung Gear S2 has done a great job with a sleek yet understated look. 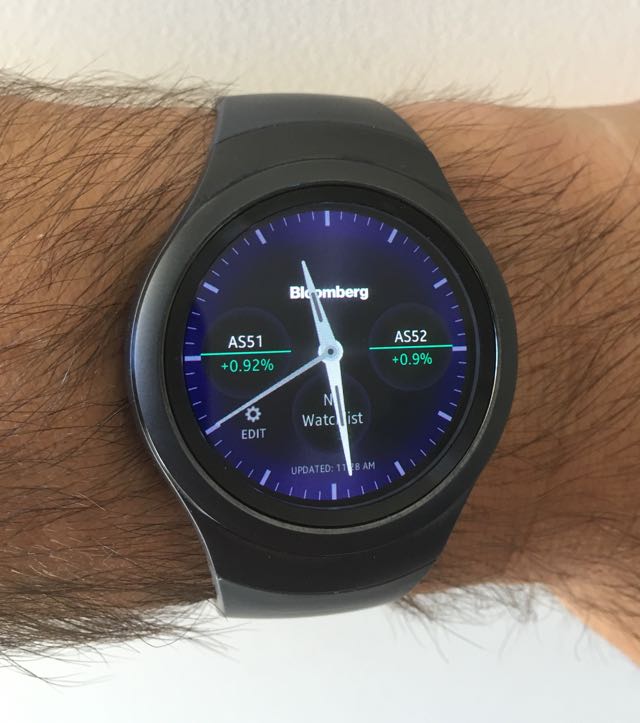 One of the killer features of the device is the rotating bezel around the screen. This is how you navigate the circular menus in combination with the touchscreen so you can easily zip around to get to the feature you want.

It has a similar functionality to Apple’s digital crown which lets users scroll the content on the screen without blocking what they’re looking at by touching the screen.

The Gear S2 will pair with any Android smartphone that is running the Gear S2 app.

But we think one thing Samsung got wrong was not making it compatible with the iPhone.

The Gear S2 really missed an opportunity here and immediately cut itself off from millions of potential customers. 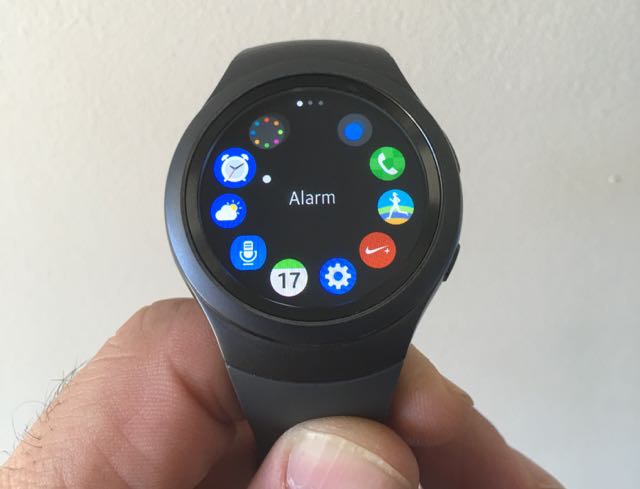 The Gear S2 is thin and light and really comfortable to wear.

There are also two side buttons that get you back to the home screen and also power it on and off.

What you won’t see on the device is a camera or a speaker.

The camera we can understand but the speaker would have been nice to make and receive calls. 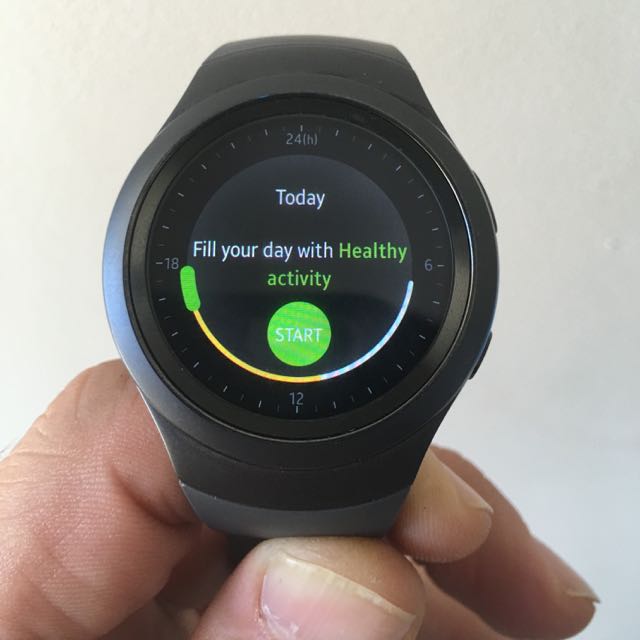 Yet it does have a microphone to reply to messages and for voice commands with S-Voice but we found the voice recognition to be a little hit or miss.

Depending on your surroundings it will do a decent job finding information or replying to messages. Other times in noisy environments it struggled and we had to get out the phone again.

You can try and reply to messages with the onscreen keyboard but it’s so fiddly it’s easier to just get out your phone and type it properly.

Onboard is 4GB of memory which can be used to store music which can be heard by pairing Bluetooth speakers. We found this handy when we went out for a run – it meant we could keep our phone at home. 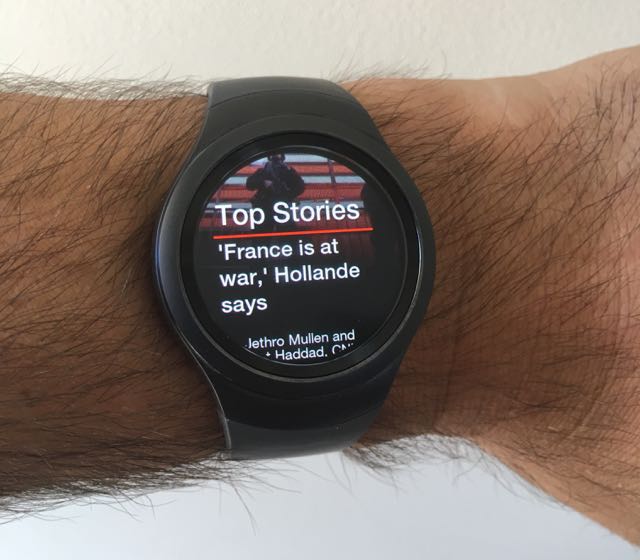 Of course you’ll also receive notifications on the Gear S2 for your messages, emails and apps with a subtle vibration.

The screen can’t display too much information because of its size and shape so don’t expect to read reams of text.

News apps like CNN display the headlines and about two paragraphs of text. It’s a good way of news tasting but when you find something you want to read, you have to move to your smartphone.

Of course you have plenty of choices for your watch faces that provide different looks, styles and information that’s displayed on the face.

The built-in apps include an activity tracker and the Nike+ running app and make the Gear S2 shine as a fitness device.

Throw in the heart rate monitor that can track resting heart rate and your heart rate while you’re training and you’ve got an above average activity tracker that can tally all of your stats throughout the day. 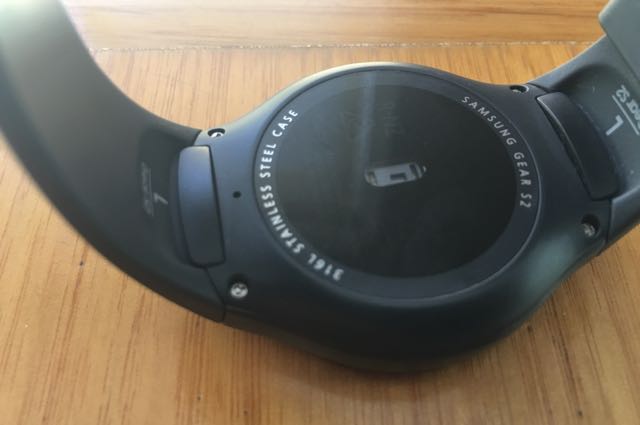 Third party apps are growing and you’ll find apps from Bloomberg and ESPN alongside CNN but there needs to be more.

A real measure is if Twitter and Facebook create apps for the Gear S2. We’re still waiting.

In terms of connectivity there is Bluetooth onboard that pairs the device to your smartphone.

But it also has wi-fi so if the Gear S2 is outside the Bluetooth 10m range from your smartphone yet still within your home network you can still get most of your messages, updates and information. 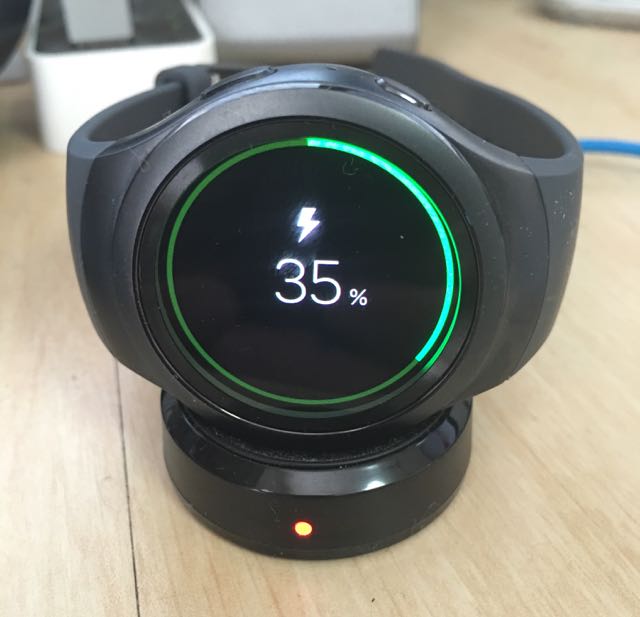 On the battery side, the Gear S2 got us through two days on a single charge and it charges pretty quickly as well with the included charging stand.

The Samsung Gear S2 is one of the most impressive smartwatches on the market. It is stylish, simple, packed with features and provides a handy shortcut to your smartphone right there on your wrist.

There are areas which can be improved and it has the potential to attract more third party apps that will take the device from good to great.

Why the SkinVision app has the potential to save your life