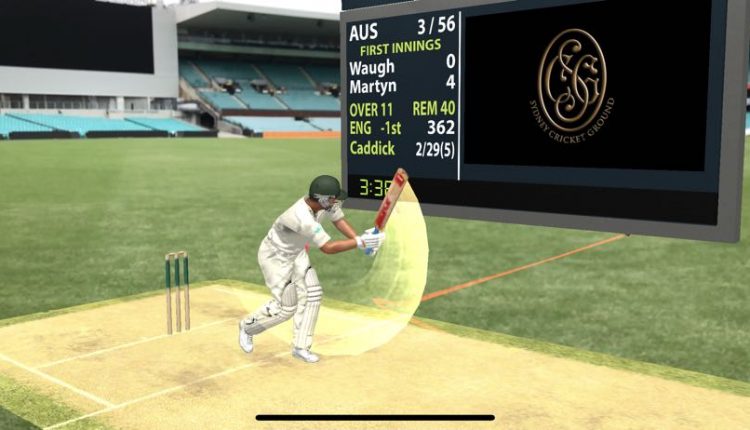 This AR experience has been created to relive that famous ton 15 years ago to allow fans to immerse themselves into one of the most memorable innings in Australian Test cricket history.

Users will hear commentary by Steve Waugh himself as well as an animated simulation of the memorable shots he played to get to his century.

These were created in the studios of app creator Avanade with Waugh even donning a motion capture suit to recreate the memorable innings.

Nine Network’s Wide World of Sports is also supplied footage of his innings which can be viewed within the app.

“Recreating the significant moments from the perfect day 15 years ago was much harder than I imagined,” said Steve Waugh.

“To mirror the exact trigger movements that accompany each shot was difficult to achieve as they were instinctive and not manufactured.

“I was unaware that I was actually doing some of these little adjustments until I studied the footage of the innings and then to try and replicate them was a real challenge.

“It was fun reliving the excitement of the day and I hope many people can now share with me the joy of scoring a century for Australia.”

The AR app will also give cricket fans the chance to learn more about Steve’s baggy green, is that in the famous red handkerchief that he carried with him for every innings.

It’s also possible to take a selfie with Steve Waugh within the app as well.

“The Steve Waugh AR is an exciting addition to the SCG Trust’s commitment to fan engagement, which in recent years has provided a fully-connected solution for its venues including high definition superscreens, free wi-fi, IPTV and our app,” said Jane Coles, general manager, membership & marketing.

“The SCG Trust is proud to be leading the way in Australian sports venue technology and using these new initiatives to celebrate our proud heritage such as Steve Waugh’s famous innings.”

Avenade is the company behind the Steve Waugh SCG AR app and it showcases the possibilities when it comes to augmented reality.

“Increasingly these rich digital experiences are becoming the norm and we expect to see more organisations introducing augmented reality to create engaging experiences for customers.

“Avanade is delighted to partner with the SCG Trust and Steve Waugh on this first of a kind augmented reality experience for a sporting venue in Australia.”

Fans attending the Sydney Test in early January will be able to enjoy the experience on a Microsoft HoloLens that will soon become an additional part of the SCG tour program.

But even if you’re not at the SCG, the Steve Waugh SCG AR app is available now in the App Store.

By utilising the camera in your smartphone, the app places Steve Waugh within your own environment.