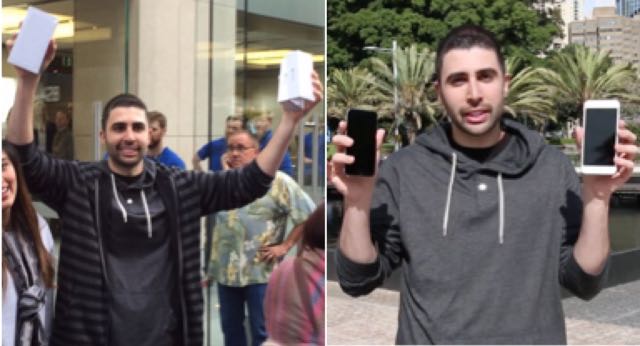 The man who waited days outside Apple’s Sydney store to be among the first in the world to buy new iPhone customers, smashed them – on purpose – for his video blog.

David Rahimi – the man presented to the press minutes after buying the first iPhones in world at the George St Apple Store in Sydney – is actually the man behind the Phonebuff YouTube channel.

Rahimi, a resident of Orange County in California, was in Australia to purchase the iPhone 6 and iPhone 6 Plus when it went on sale some 17 hours ahead of the US.

This gave him the chance to conduct and film a drop test of the two new iPhones to test their durability.

The video was filmed opposite Hyde Park in Sydney near the Aquatic Centre.

In the video, Rahimi drops a gold iPhone 6 Plus and a space grey iPhone 6 on the concrete to test their durability.

Both screens are seen to shatter when dropped from chest height.

With so many customers eager to get their hands on Apple’s desirable new iPhones, it would be enough to make a grown man cry seeing them destroyed in this way.