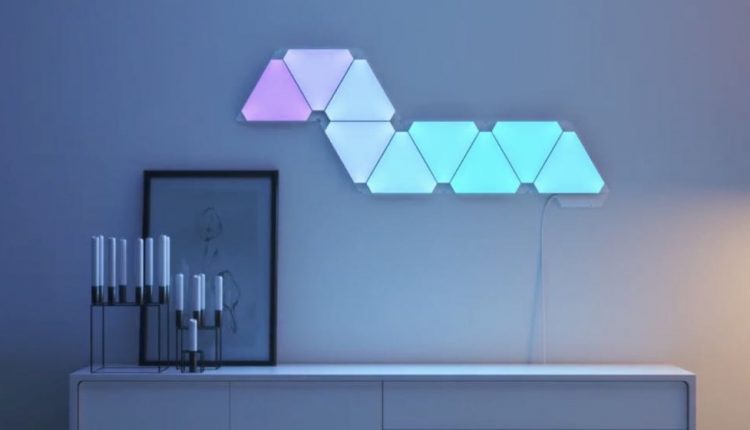 We’ve heard of smart lights but there’s nothing like Nanoleaf’s Aurora Modular Lighting System which gives the user the option to design exactly how it looks and control it using your voice.

With Aurora you get to be both the lighting designer and the controller.

The lights are versatile and attractive and can change the look and feel of a room and provide a relaxing and potentially mood changing colour and pattern.

The starter kit, priced at $299.99, is made up of nine triangular light panels which can be arranged in any shape you like before mounting it on the wall.

Each triangular panel’s is capable of displaying 16.7 million colours which means the patterns and colours you can create are virtually endless.

For our review, we installed the Nanoleaf Aurora in our office and was pleasantly surprised by how easy it was.

Everything you need is in the starter kit to go ahead and design and create your own lighting system.

We set out the panels on the floor in the shape we chose so we could see how tall and wide it would be on the wall. 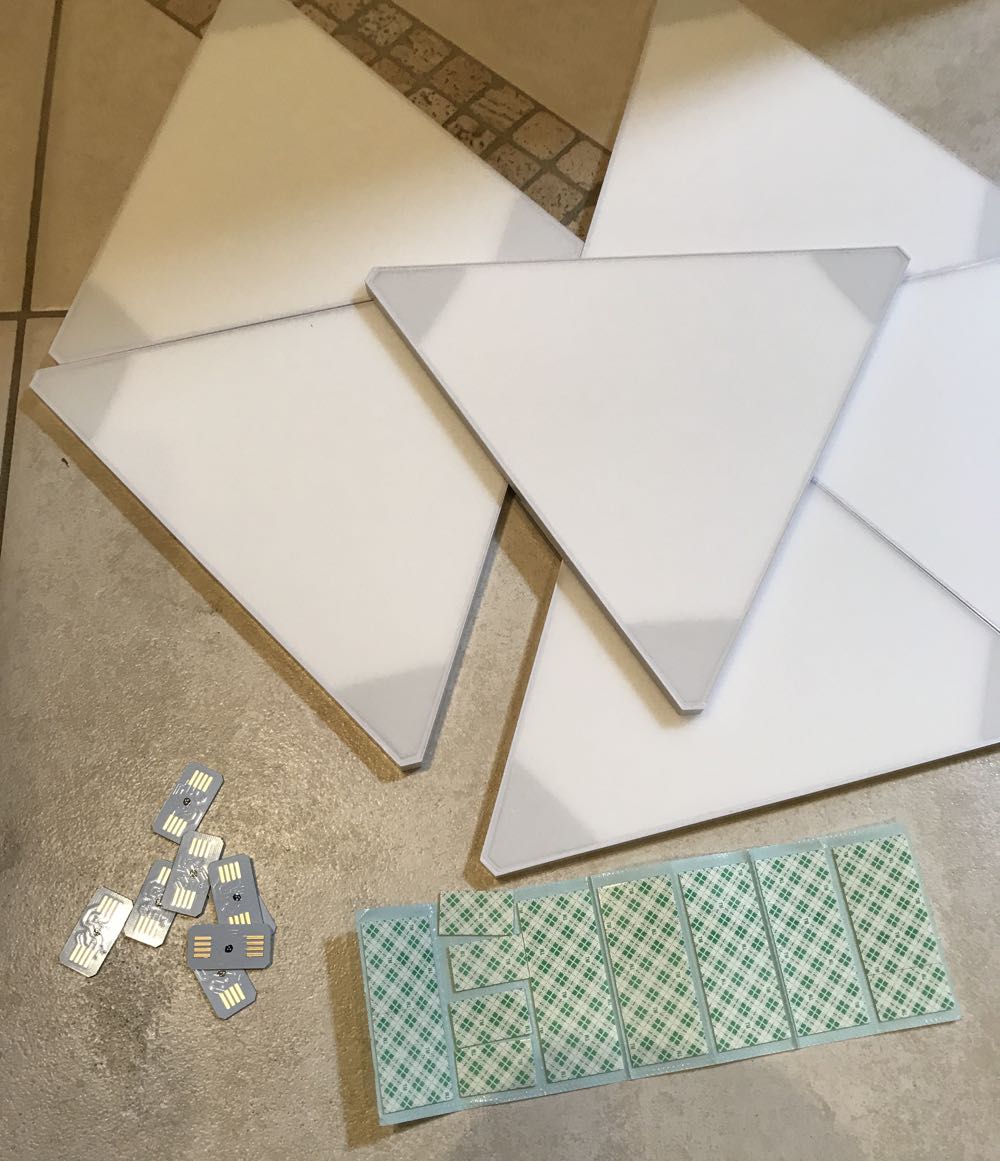 This way we knew exactly how much room we needed to fit our pattern.

With nine triangular panels there are only so many shapes you can design but, the good news is, you can buy Aurora expansion packs (there are three panels in each) if you wanted more options.

Included in the starter kit is mounting tape and linkers which join each triangular panel to the one beside it. 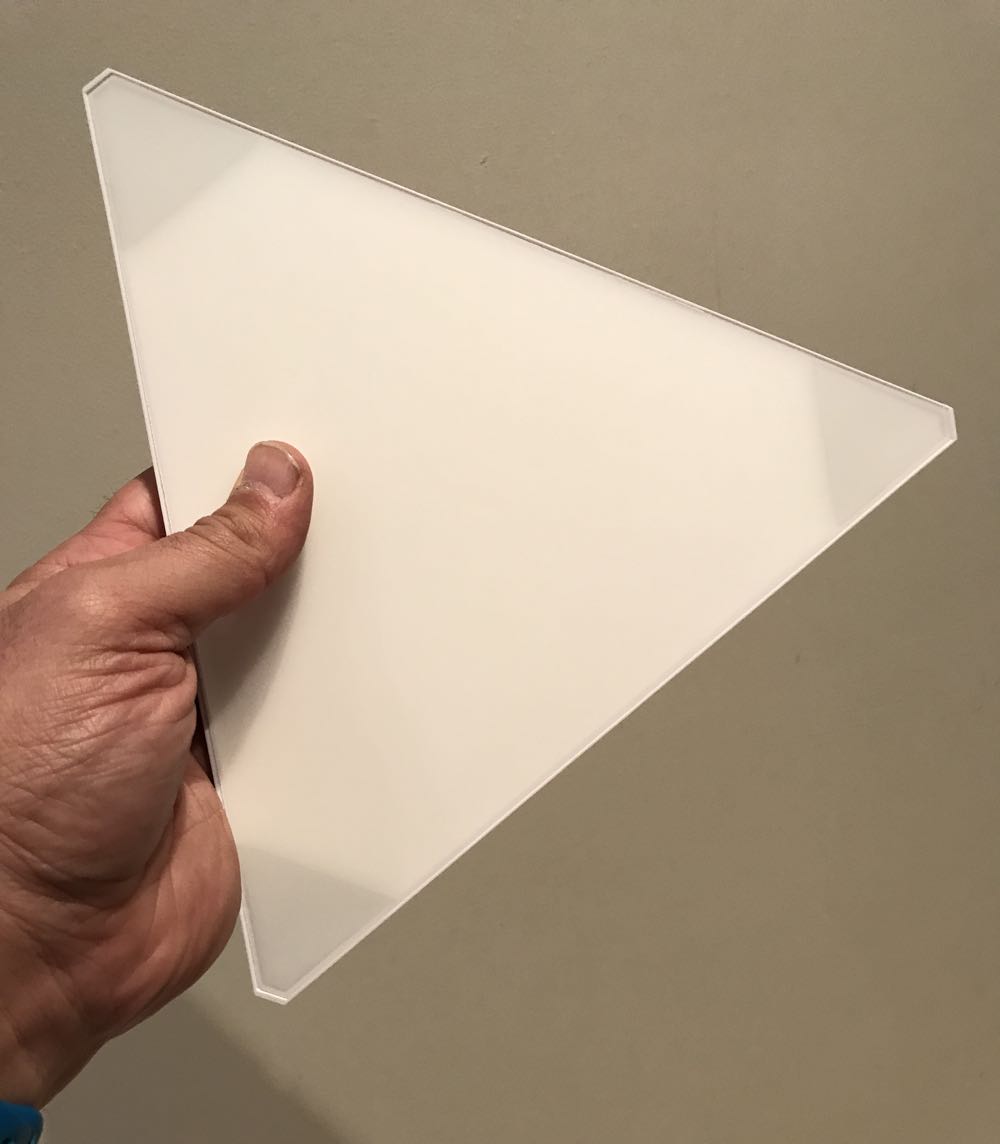 A small controller can also be positioned so it is closer to the power point.

Once we positioned our first panel on the wall, it was easy to continue the design using the linkers and the other panels.

The controller was connected to the bottom of the pattern with the cord able to drop down the wall to the power point.

And that’s it. Installation done.

The next step was connecting it to our wireless network. This is pretty simple, even easier if you have an iPhone with the HomeKit app on board. 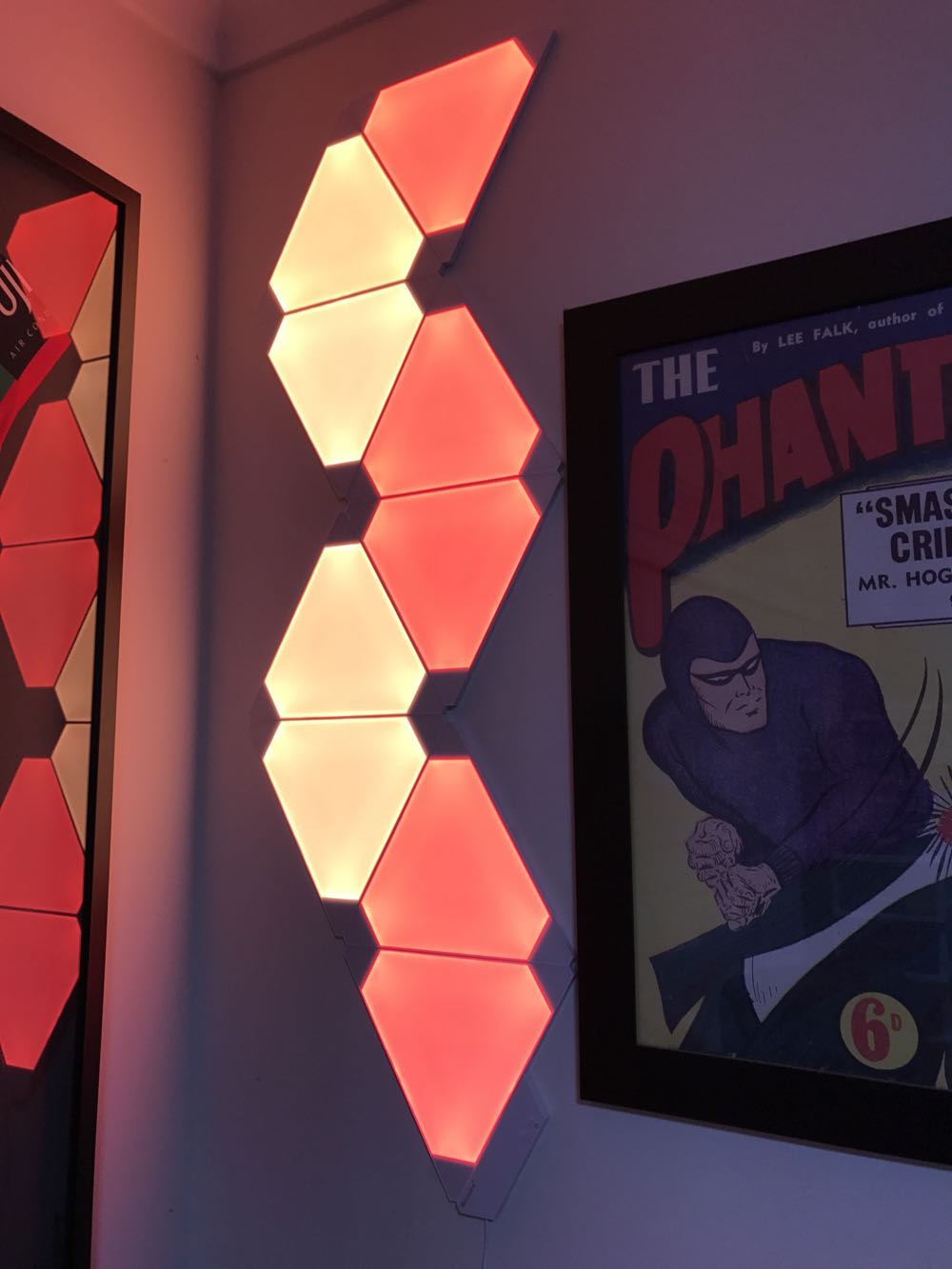 When we opened HomeKit app we selected the + in the top right-hand corner to add an accessory and it detected Aurora immediately.

A window opened for us to scan the HomeKit code off the Aurora quick start menu and we were connected and able to control the brightness and to turn it on and off.

For even greater control we installed the Nanoleaf app before getting access to countless other effects and modes. 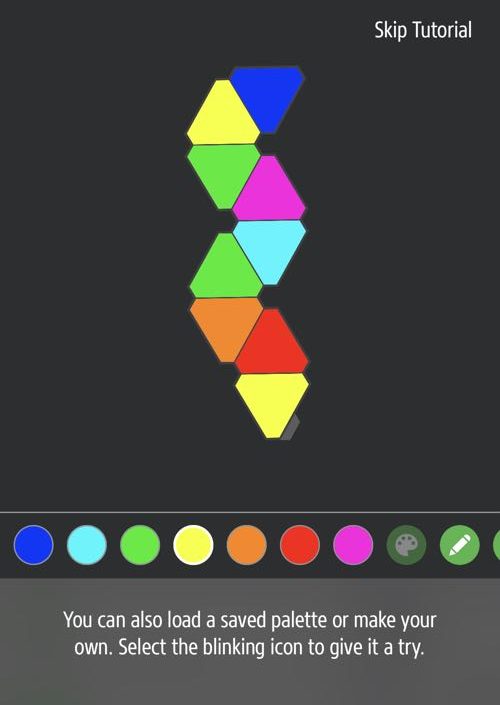 We could also create our own colour pattern and save it is in effect as well.

And you can also use your voice to turn it on or off or change the Aurora colour or pattern using Siri.

Simple say “Turn Aurora green” or ask it change to a preferred effect and it will change before your eyes.

With the app, it’s also possible to create colour reminders or set Aurora to turn on and off at certain times. 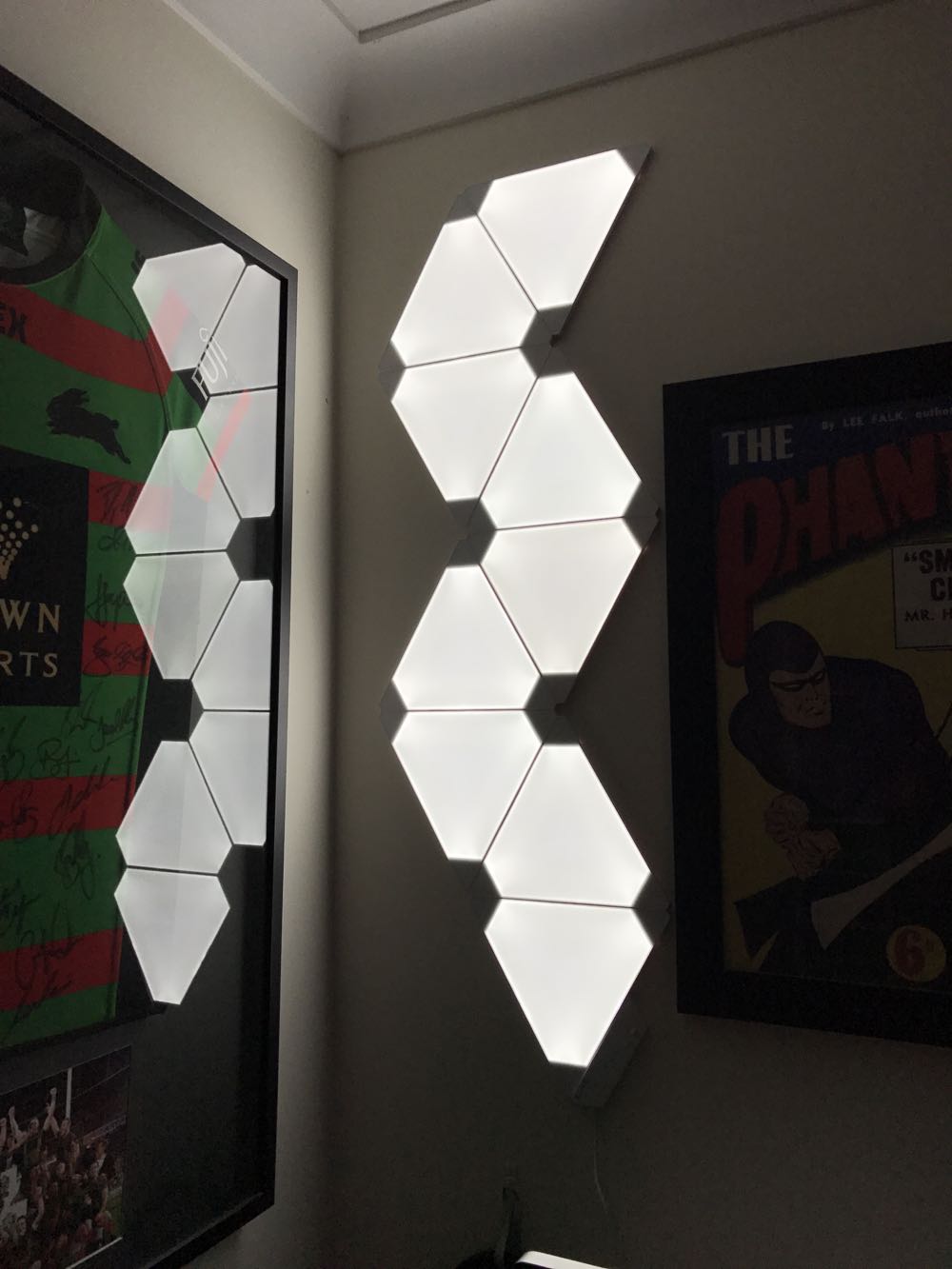 If you’ve installed it in your bedroom you can even program Aurora to wake you up with light.

There are also a number of colour configurations to trigger different emotions and tasks.

For example, one effect is called Be Happy and it displays bright colours which you can choose to cycle randomly in a flow in a circle or in a burst.

There are others to help you relax (Be Zen) and to focus (Be Productive).

A couple of times we did lose the connection to Aurora and had to unplug it and reconnect it again to re-establish the connection.

But that was rarely the case – the Nanoleaf Aurora in an impressive product that will be a real conversation starter.

The Nanoleaf Aurora Starter Kit is priced at $299.99 and expansion packs with three triangular panels are priced at $99.99.

Down the track there will be some Aurora add-ons including a rhythm module so the lights can sync to your music as well as flex linkers so you can create 3D patterns plus mounting kits for a more permanent and professional installation.

Nanoleaf Aurora is available now from Apple Stores and from these online stores:

The Nanoleaf Aurora is a refreshing new take on smart lighting which allows the user to design exactly how it looks and take control with an endless number of colours and patterns.

PROS: Easy to assemble and install, versatile and colourful, endless colour choices, control with your voice and app.

CONS: Had a couple of wi-fi dropouts.

VERDICT: The Nanoleaf Aurora is a refreshing new take on smart lighting which allows the user to design exactly how it looks and take control with an endless number of colours and patterns.