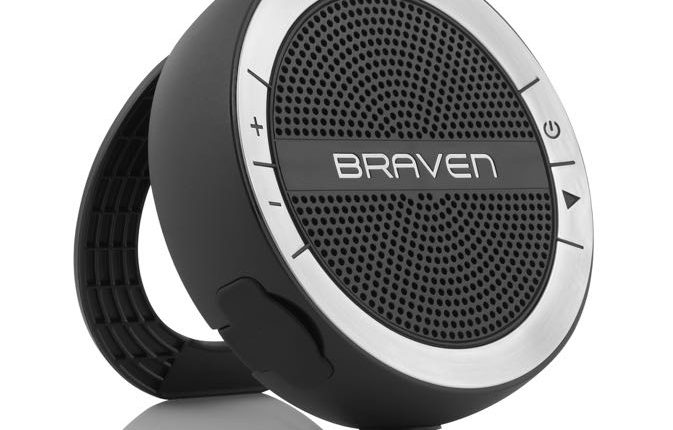 There are a lot of Bluetooth speakers on the market at the moment but not all of them are quite as versatile as the Braven Mira water resistant speaker.

The circular speaker can be used anywhere – including in the shower or by the pool.

And the handy hook on the back can be used to hang it off the shower head and anywhere else and it can also be used as a kickstand to prop it up on any flat surface.

On the front are the controls – volume up and down, on/off switch and the play button.

The Braven Mira links wirelessly to your smartphone and even has its own app to allow users to create playlists and control the speaker.

On the edge is a small flap that conceals the Auxiliary In port to connect another device with a cable along with the charging microUSB port.

It can also act as a handsfree speakerphone in case you get a call while it’s linked to your smartphone.

Calls are quite clear thanks to the device’s noise cancelling microphone which reduces background noise.

With a water resistant rating of IPX5 the Mira can handle a splash but not a dunk so be careful beside the pool that you don’t drop it in the water.

Even if someone does a bomb in the deep end and the Mira gets splashed the speaker will be fine.

But it’s also totally OK for places like the shower which is exactly where we tested it to hear our favourite music.

Audio quality was crisp with nice definition and a level of bass that was impressive for a unit of this size.

In terms of volume this little speaker – which only measures about 12.5cm across – really does pack a punch.

The rechargeable battery on board lasts up to 10 hours of continuous playback on a single charge so you’re not going to be rushing to the power point too often.

The Braven Mira is available in a number of colours including black/silver, grey/silver, pink/silver and blue/silver.

Available now from Beezer, MacintoshAddict.com.au and Tech2Go airport stores, it is priced at $129.99.

Black Friday shoppers have a healthy appetite for technology