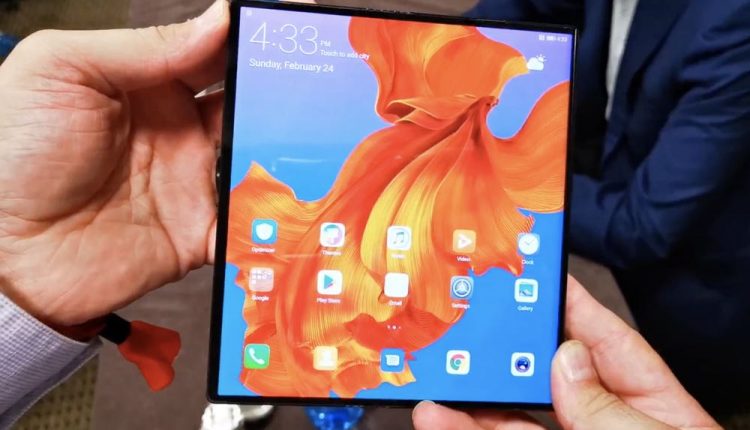 Tech Guide was one of the few publications that was able to get a hands-on look at the impressive new Huawei Mate X foldable which has just been unveiled at Mobile World Congress in Barcelona.

Tech Guide editor Stephen Fenech was of the very few journalists, and the only Australian journalist, who was allowed to handle the Mate X foldable device just hours after it was revealed to the world at the Huawei press conference.

While most people have seen the device from a distance – even then it is very impressive.

But when you actually hold it in your hand the experience is even better.

In the folded position it is surprisingly light and easily fits in one hand.

In terms of thickness it doesn’t feel any fatter than a phone in a protective case. 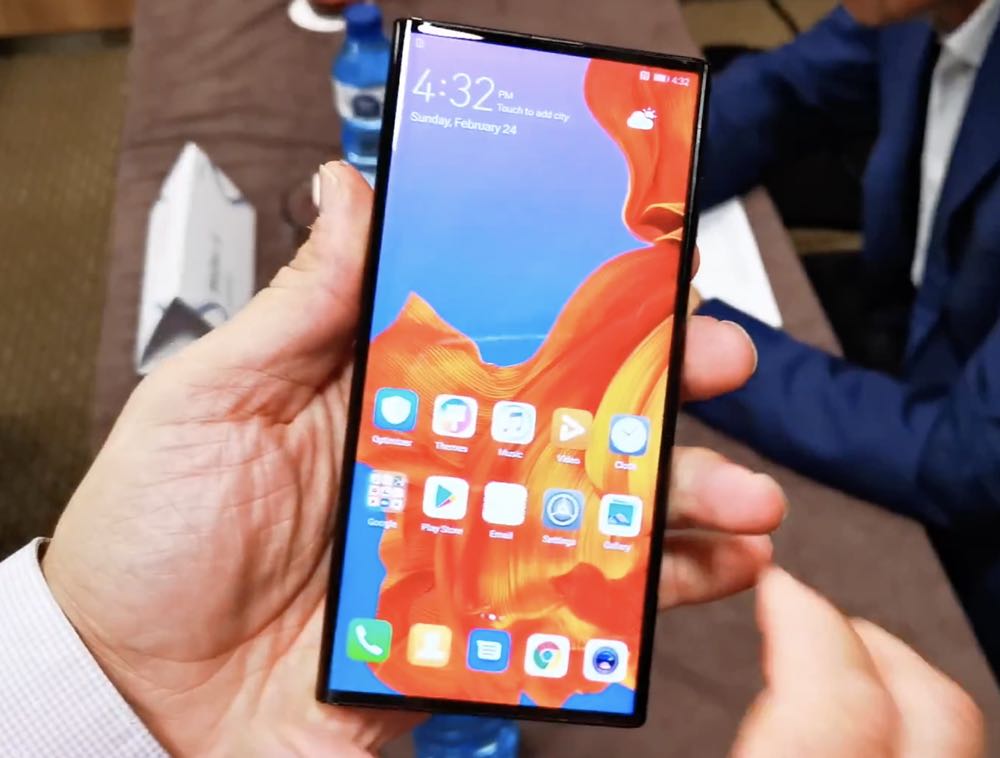 The rounded edges also make it sit quite comfortably in your hand like a regular smartphone.

But that’s where the similarities end.

The screen has a different gloss because it is made from a special plastic polymer rather than glass as you would see on a regular device.

But the display is still responsive and smooth. 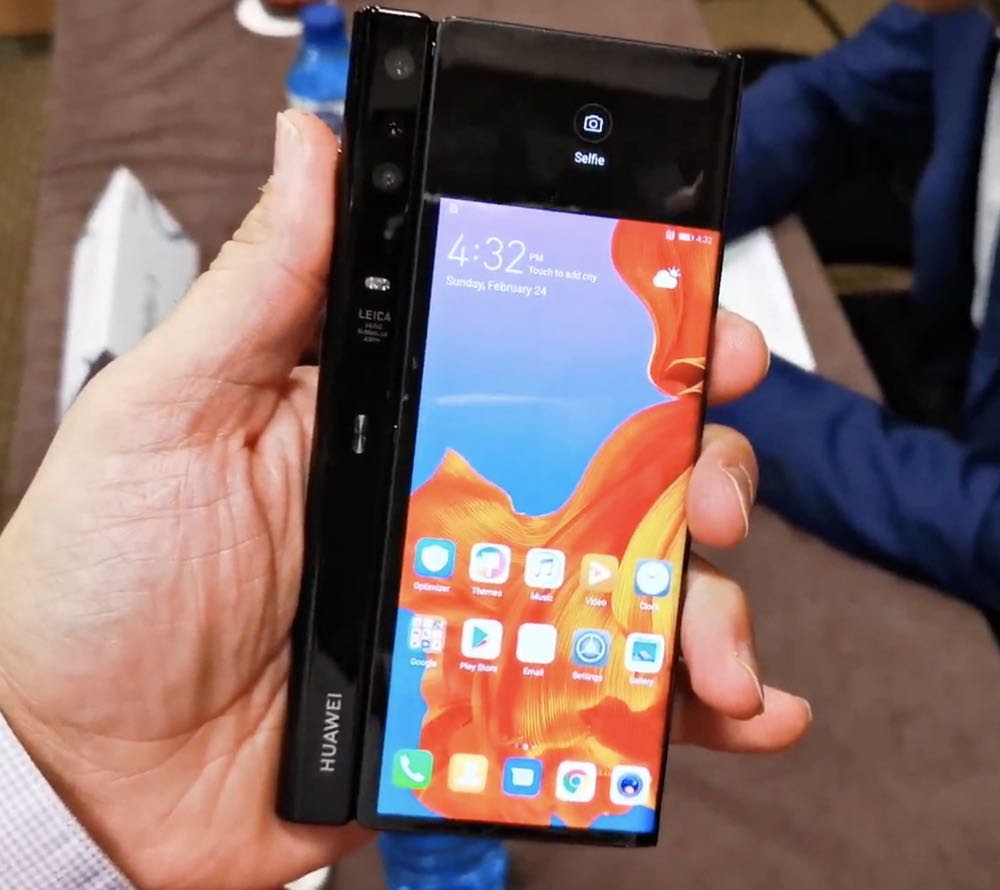 So when holding the device’s 6.6-inch screen in the folded position it is illuminated and active.

When you turn the device over to the smaller 6.38-inch screen you see it also come to life while the other downward facing display goes to sleep.

At the top of the smaller screen was a short cut to selfie mode which didn’t immediately work when we pressed it.

Remember this is an early version of the device and there would still be some bugs to iron out.

But that selfie shortcut is offered on that screen because the cameras – all three of them – are located on the grip beside the screen.

While no specs were officially given about the cameras, we understand one of the lenses is a 40-megapixel camera.

Just below the cameras is a button that unlocks the screen so it can be folded out.

One press on this button and you hear a click and 6.38-inch display pops open slightly so you can grip it and fold it open.

There was a soft noise when unfolding the screen – this was the falcon wing hinge engaging which is the secret sauce of the device.

This is what makes the whole folding screen possible.

Huawei explained that there are several layers that make up the screen and that folding them results in some layers extending further than others.

It’s not as simple as folding a piece of paper.

That’s where the falcon wing hinge comes into play to keep those layers even as well as flexing it through 180-degrees.

You need two hands to fully unfold the screen and it needs to be flexed out completely to engage the hinge again and lock it open and straight.

In this position you can hold it with one hand thanks to that ergonomic grip which has a slight curve inside to accommodate your fingers.

In this full screen mode there is now 8 inches of space for you to use.

One thing we did notice with the screens was that they were highly reflective and we could easily see the rooms ceiling lights on the screen even when the display was fully illuminated.

A screen of this size is ideal for viewing content or using multiple apps at once.

During one demonstration we were shown what YouTube videos looked like on the Mate X and it looked stunning.

And when the screen was closed halfway through, the video reverted to the small screen facing the user.

And even tilting this 6.6-inch screen to landscape mode, the video adjusted to the screen shape and we were able to continue watching.

Scrolling through the home screens was smooth and effortless as it is on a regular smart phone.

And with no home buttons in sight, getting back to your home screen you simply swipe up from the bottom of the display.

And accessing the settings is the usual sweep down from the top of the display.

From what we could see, the Mate X is using Android 9.0 with a special version of Huawei’s EMUI 9.0 which is being adapted to adjust to the foldable screen.

In the brief time we spent with the Mate X, we could tell this was a definite game changer.

Once you get to use a device like the Mate X which can fold out to the size of a tablet, it will be very hard to go back to using a regular smartphone.

One thing we could demonstrate was its 5G speed which the company claims is fast enough to download a 1GB movie in just three seconds.

Thankfully, Australian telcos are developing their 5G networks which we are hoping will be able to give the Mate X some room to run.

Sure, it’s going to be really expensive when it comes out – about $AUD2700.

But this is not unusual for brand-new technology of this calibre to be priced at those levels.

Huawei could easily justify the price by saying you’re getting two products in one – a smartphone and tablet.

What you’re really paying for is that incredible innovation that is now part of this amazing new product.

Expect to see the Huawei Mate X foldable smartphone in Australia in the second half of 2019.