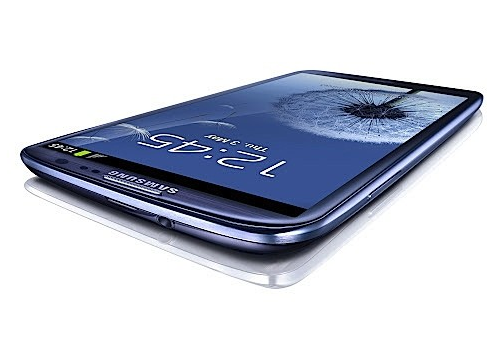 The Samsung Galaxy S III has been the most anticipated smartphone the company has produced with an Apple-like launch and just as much hype.

Samsung did well to co-ordinate a secret in-store release literally an hour after the huge launch event at the Capitol Theatre concluded.

And the most satisfying thing is the product delivers on all the hype with a suite of intuitive features that fits in with the user instead of the other way around.

Samsung was always going to have its work cut out for it following up the phenomenally successful Galaxy S II and the powerful Galaxy S III is an improvement in all departments.

Samsung has shown off some impressive engineering with the Galaxy S III by making the display half an inch bigger – 4.3-inch to 4.8-inch – but only increasing the overall size of the device by just 16 per cent.

It is slightly taller than the Galaxy S II but the same width.

Samsung says it took its design cues from nature with the same flowing lines and curves of pebbles and leaves.

It has a curved rear panel and rounded corners and is framed by a slightly curved silver bezel.

On the top edge is a headphone jack while the on/off/lock is on the right, volume up and down on the left and the micro USB sync/charge port on the bottom.

The only button on the front of the Galaxy S III is the home button and there’s a front 1.9 megapixel camera and light and proximity sensor above the screen.

On the back is an 8 megapixel camera an LED flash and a speaker.

The back panel is made of plastic, probably to keep the device light, and slight detracts from the overall build quality.

On the plus side, the Galaxy S III feels great in your hand with the curves edges resting nicely against your fingers.

The Galaxy S III has a lengthy feature list with many we expected but a few innovative additions.

One of the first things people will notice is the excellent 4.8-inch Super AMOLED display – now a trademark of the Galaxy range.

The device can see you, hear you and detect you to make it work around you instead of you adapting to it.

Smart Stay actually uses the front camera to see if your eye is trained on the screen. This feature works especially well when you’re browsing web, reading emails or an ebook and prevents the display dimming out while you’re reading.

As part of the Android 4.0 operating system on board, the device can also be set to unlock using facial recognition instead of a password.

We found this to be a huge disappointment. It only worked a third of the time and only if we were in a perfectly quiet environment.

It is not a patch on Apple’s excellent Siri system which has remarkable accuracy and actually worked through the microphone of our car when it was paired with Bluetooth.

The Galaxy S III’s microphone didn’t extend to the car when linked via Bluetooth – a place you’d expect to use a feature like this quite a lot.

There are some motion commands as well – double tap the top of the device gets you to the top of your message, your email inbox and your contact list.

Direct Call also worked well and allowed us to make a call to the person we were testing simply by lifting the Galaxy S III to our ear.

The onboard 8-megapixel camera is exceptional and captures quality stills and impressive full HD video.

One problem we’ve found with other mobile cameras is the lag time of the shutter – no such problem with the Galaxy S III which has zero lag and takes less than a second to get into camera mode.

But the camera is complemented by additional features like Burst Shot which can take 20 frames in a single hit while Best Shot picks the best picture from a range of shots.

Sharing is also taken a step further with Buddy Share. The device will recognise your friend’s faces in the picture and also allow you to tag them and share the image via MMS.

A favourite feature was Pop Up Play which allowed us to play a video and then resize it to a smaller window and perform another task at the same time. This really showcased the power of the onboard quad-core processor.

Also on board is S Beam which takes advantage of NFC (near field communication) to enable file sharing just by touching compatible devices together. A 1GB file can be shared in minute – a 10MB file in seconds.

The feature set is rounded out with Wi-Fi Channel Bonding for even faster wi-fi sharing and Bluetooth 4.0.

Having a long list of features is one thing but being able to support that with a fast processor and a long-life battery is the end game for mobile manufacturers.

Samsung easily achieves that with the Galaxy S III.

The speed of the 1.4Ghz quad core processor is obvious with every command. Everything happens instantly and tasks can be performed simultaneously which was well demonstrated with Pop Up Play.

But the biggest compliment should go the battery. The 2,100 mAh battery easily powered through an entire day and well into the following day.

We got a day and a half of battery life before it was absolutely exhausted which puts it way ahead of other smartphones on the market.

On the downside the battery took quite a while to get a full charge – more than three hours – but it was a small price to pay to ensure the battery’s exceptional performance.

It would have been nice to have a 4G version at launch but Samsung says one will be available in the near future.

The Samsung Galaxy S III has set a new benchmark in terms of design, features and performance and is a stunning improvement over the excellent Galaxy S II.

And having a processor and battery to keep the user connected only endears the device even more to any customer who decides to buy it.

Samsung has hit a home run with the Galaxy S III. It is the smartphone to beat.