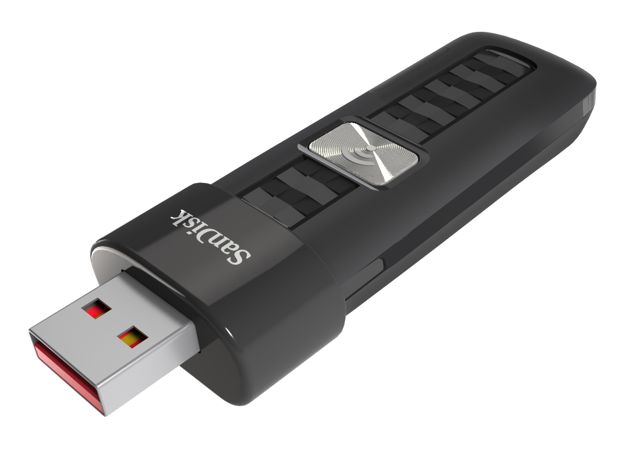 The SanDisk Connect Wireless Media Drive and Connect Wireless Flash Drive can store your favourite content and then allow users to stream the onboard music, photos and movies wirelessly to smartphones and tablets.

Each of the SanDisk Connect products create their own wi-fi hotspots which users can join on their devices as they would any other wireless network.

A companion SanDisk app for each of the storage devices is available for iOS, Android and Android platforms and allow users to easily access the content from each drive without the need to connect a cable.

The SanDisk Wireless Media Drive is just 6.6cm square and about 1.4cm thick which means it’s easy to load up with content and slip it in your pocket.

Available in 32GB and 64GB capacities, the Connect Wireless Media Drive has its own rechargeable battery that can run for up to eight hours on a single charge.

Apart from its internal storage there’s also a memory card slot on the side of the product so it can wirelessly share the content from the card as well.

The SanDisk Wireless Media Drive can connect to up to eight different devices and stream five high definition movies at the same time.

The SanDisk Connect Wireless Flash Drive might look like a regular USB drive but packs in many other features include wireless connectivity and a rechargeable battery that will run for four hours.

And you can charge the device simply by plugging the USB into a computer.

While it can work like a regular USB thumb drive, the device can also wirelessly connect up to eight devices with three simultaneous streams to smartphone and tablets.