Apple has unveiled a new 12-inch MacBook with Retina Display that’s thinner and lighter than any other laptop the company has ever built.

The device is just 13.1mm at its thickest point and weighs only 920grams.

And the new 12-inch MacBook is in a category of its own and sits outside the MacBook Air and MacBook Pro families which will still be available with faster processors and higher memory capacities. 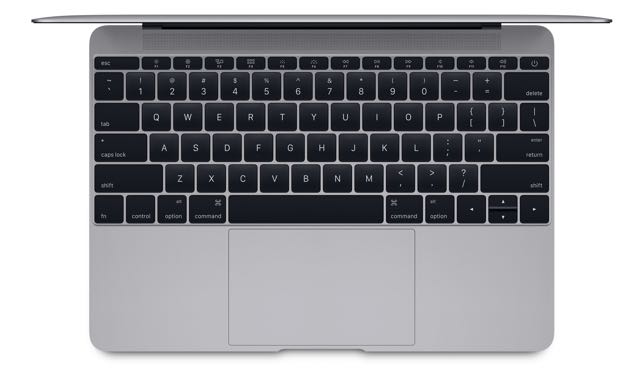 Under the hood is a range of new features and technologies that allows the MacBook to run all day on a single charge.

In fact, Apple says the new 12-inch MacBook is the world’s most energy efficient notebook ever created.

The keyboard now goes edge to edge and has also been reinvented with an all-new mechanism under the keys to make typing easier and more accurate.

This new keyboard features keys that are 17 per cent larger and is also 34 per cent thinner than the previous Apple keyboard.

There’s also a new larger trackpad on board that with a new technology called Force Touch.

Force Touch senses a range of pressures on the trackpad to access files, highlight text and take easier control of media files and much more.

There’s also a Taptic Engine, similar to the one found on Apple Watch, for clicking feedback.

On the battery side, Apple has literally reinvented the power cells for the new 12-inch MacBook with a new terraced design.

This means the battery is contoured and can now take up even more space inside the metal unibody.

The result is a 35 per cent larger battery capacity for all day battery life that can last more than 10 hours on a single charge.

The new MacBook also has new USB-C port which allows charging, data transfer and display connection all through a single port.

There is no memory card slot or any other USB ports. The only other port is a headphone jack along the right edge.

The new 12-inch MacBook with Retina Display will be available from April 10 and will be priced from $1,799 with 1.1Ghz dual-core Intel M processor with Turbo Boost up to 2.4Ghz, 8GB RAM and 256GB of flash storage.

There will also be a model with 1.2Ghz dual-core Intel M processor with Turbo Boost speeds up to 2.6Ghz with 8GB RAM and 512GB flash memory for $2,199.