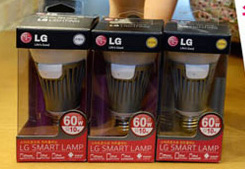 LG has entered the lighting space after unveiling a new smart bulb that can indicate when you’re getting a call and be controlled with your smartphone.

LG joins companies like Philips and Belkin who have released similar products with its Smart Lamp which was revealed in South Korea this week.

It is an LED lamp which will give Android and iPhone users complete control over their lighting which includes a light-based alarm clock mode to set reminders.

There is also a security mode that can be set and controlled from a smartphone to give people the impression that you’re home.

Users can connect to the bulbs using both wi-fi and Bluetooth so it can not only be controlled across a network but also offer notification flashes when you receive a call or text message.

The LG Smart Lamp also has a Play Mode which means it can also be synced to a TV or audio system to blink in time with music at a party.

And being an LED lamp is 80 per cent more efficient than regular long-life bulbs and will offer a saving on electricity bills.

Each LG LED Smart Lamp, if used for five hours a day, will last for up to 10 years before they need to be replaced.

It is now known if the LG Smart Lamp will be released in Australia.