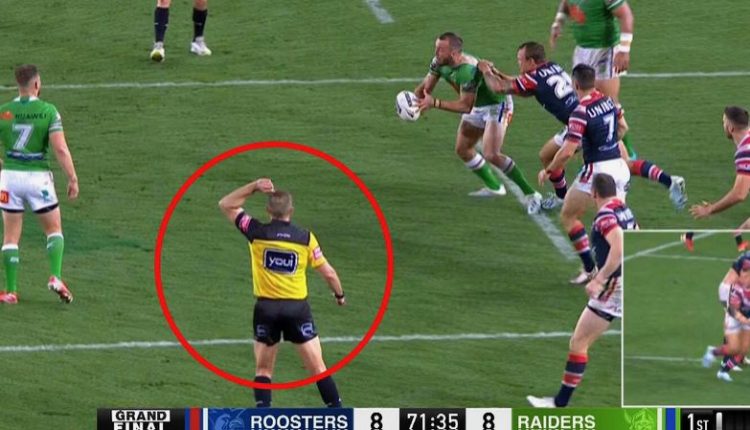 If ever there was an argument for returning to having just one on-field referee in the NRL it was the Grand Final between the Sydney Roosters and the Canberra Raiders which descended into farce after a crucial refereeing error.

Many are arguing the blunder may have robbed the Raiders of a premiership.

Sportsbet has even refunded punters who backed Canberra to win – a total of $1.35 million to more than 38,000 customers.

With less than 10 minutes to remaining, the Raiders contested a bomb on the Roosters’ line which bounces back into the arms of a Canberra player.

Referee Ben Cummins clearly signals for six more tackles and the Raiders play to the whistle with Jack Wighton being tackled with the ball.

But in the run of play, pocket referee Gerard Sutton tells Cummins the ball had actually come off a Canberra player which made it the sixth and last play.

Cummins alters the call to “last tackle” on the run.

But by this time Wighton, thinking his team had another set of six tackles, is tackled in front of the Roosters posts instead of kicking the ball and trying for a repeat set.

Cummins orders the changeover while a bewildered Wighton gets up to play the ball again.

The Raiders five-eighth actually plays the ball and repeats the six again signal he saw from Cummins a few seconds earlier.

In the next set of six tackles, the Roosters made a bust down the left side and scored the winning try.

The NRL’s greatest fear was realised in the game’s biggest match of the year – a refereeing error potentially costing a team the premiership.

The issue here was the differing opinions of the two on-field referees.

in this case, the main referee (Cummins) makes the six-again call before the second referee (Sutton) corrects him.

And that’s your problem right there.

And in the fast pace of a rugby league match that could have dire consequences.

Unfortunately we saw that in the biggest game of the year last night – the NRL Grand Final.

NRL adopted two on-field referees in 2009 in a bid to improve the standard of refereeing in the game.

There is a main referee and a pocket referee who offers an alternate point of view to the action.

We have seen many instances where decisions have been overturned on the run.

A common one is whether is whether a team has a goal-line dropout or a 20m restart and it’s not unusual to see that decision changed.

Another common decision that is reversed is deciding which team has the scrum feed after a ball goes into touch.

But these all occur during a break in play when the referees actually have time to change their mind.

In the case of last night’s NRL Grand Final, the reversal of the six again call was made with the ball in play and affected Canberra’s attacking decision.

Consistency, or lack of it, when it comes to refereeing decisions has been the bane of the NRL in recent seasons.

The introduction of the Bunker brought technology into play to break down the game into thousandths of a second from various angles to adjudicate the tough calls.

But even this has resulted in numerous howlers over the years.

At the end of the day, despite all the technology at their disposal, it’s still a human being making the decision.

Having two referees on the field means there are two interpretations for every single incident whether it’s a knock on at the play the ball, a team being held down for too long in the tackles or a forward pass.

In the old days with one referee, the players had to live or die by their decision.

The referee called it as he saw it and that was that. No one in his ear and no second referee to second-guess his decision.

It’s not uncommon to hear referees questioning each other over decisions.

In a game as fast as rugby league this just won’t cut it.

And unfortunately, we saw the worst possible consequence in an NRL Grand Final that potentially robbed a team of a premiership.

Replays from last night’s game show the ball actually did come off the shoulder of Raiders replacement Bailey Simonsson when he contested the bomb against Roosters fullback James Tedesco.

But with Cummins signalling six again, the Raiders thought they were back to tackle one rather than kicking the ball in a bid to gain a repeat set on the Roosters line.

By the time the call is reversed, it’s too late for Wighton to kick the ball and set up a try scoring opportunity.

This isn’t like changing the decision on who feeds a scrum, whether a ball was knocked on or stripped or whether a team taps the ball from the 20m line or has to do a dropout from the goal line.

This was an on-the-run decision that altered a team’s approach to their attack and potentially the result of a game.

We have even seen obvious blunders go unchanged.

One that comes to mind was in the Melbourne v Canberra semi-final two weeks ago when the Storm  winger was ruled to have gone into touch when replays clearly showed he was still in the field of play.

In this instance, there was ample opportunity to review this decision and reverse it.

The game continued and Canberra won the match.

With so many officials off the field –  including the touch judges and the Bunker –  surely this means one referee should be able to handle things in the middle.

Let’s say Cummins was the only referee on the field last night and play continued with the six again decision.

The Raiders may have scored the match-winning try.

And then the Roosters would have a case to argue. It wouldn’t have been the first time a referee got a call wrong and probably not the last time.

But it is the confusion between the two referees like we saw last night that is the issue.

Players have no choice but to play to the whistle and that’s exactly what Canberra did.

The fact that it occurred during a Grand Final with the game poised on a knife’s edge is the real tragedy here.

And this was after another farcical turn of events early in the match when a Raiders charge down of a Roosters kick ricocheted off a Roosters trainer.

The Raiders were in a position to regather the ball and continue their attack downfield.

But because it hit the trainer off a Raiders player who made the charge down, a scrum was ordered with the Roosters awarded the feed.

And that was the correct call – as unfair as it seems.

The rule states that if a ball hits a referee (in this case the trainer) a scrum will be packed down with the attacking team given the advantage.

In the next set of six, the Roosters scored their first try.

The NRL needs to take a long hard look at the refereeing for the 2020 season.

The 2019 Grand Final, which should have been the game’s showcase match of the year, will forever be remembered for this massive refereeing blunder rather than the skills and sportsmanship of the players on the field.