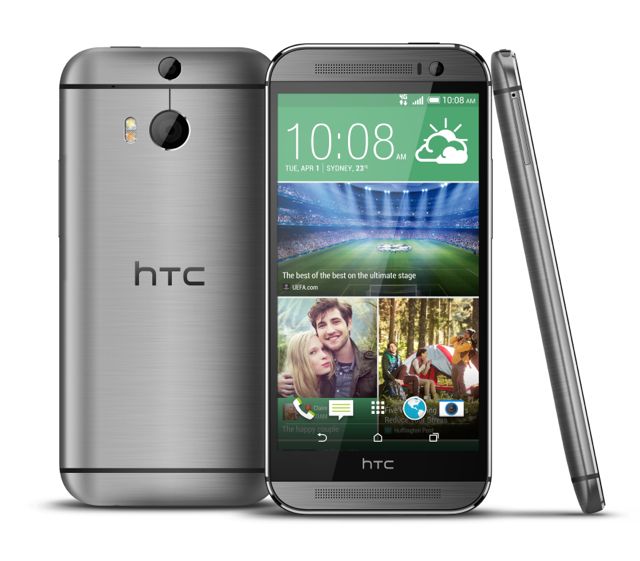 HTC has unveiled its latest Android smartphone in New York – the HTC One M8 –that will turn heads with its looks, quality and innovative features.

One of these features is a dual lens camera on the back of the device that will change the way we take and edit images on a mobile device.

The One M8 – a certainty to be pronounced One Mate in Australia – is encased almost entirely in metal with a jewellery grade brushed finish.

The gunmetal grey device has a sleek curved shape that is thinner than the previous model – the popular HTC One which set the company on the course of giving design as much a priority as technology.

The One M8 has a 5-inch full high definition screen that is covered in scratch proof Gorilla Glass 3.

On the design side, 90 per cent of the smartphone is made of metal. The device also has added strength thanks to the construction which is basically two main pieces of metal sandwiched together to form a rigid skeleton.

The only part of the One M8 that is not covered in metal is the area where the antennas and aerials are located.

On this front HTC says network performance has also been enhanced for better reception on cellular networks and on wi-fi.

And while the device is impressive on the outside, the features on the inside also raise the bar on what’s possible on a smartphone.

The One M8 is designed to get to know the user and customise itself to you.

That starts with the new Sense 6 user interface that has been redesigned with a modern flatter look – it looks a little bit like Apple’s iOS 7 – that colour codes the different aspects of the device.

Blue is for email, for example, whereas orange is the colour of entertainment on the One M8.

One new feature is Motion Launch. Rather than reaching for the small on/off/lock key on the top edge to lock or unlock the device, users now simply double tap the screen.

Similarly from the locked screen, a swipe to the left will take users straight to their home screen whole a swipe to the right will activate Blinkfeed.

Blinkfeed is a collection of news and social media streams that can be customised to gather news that is interest to the user no matter how obscure it may happen to be.

Social media streams are also gathered in one place on Blinkfeed so information and updates are flowing towards the user without the need to open multiple apps.

But perhaps the most dramatic new feature is the dual lens Ultra Pixel camera.

On the rear panel are two lenses that work together to capture images with a lot more digital information like depth information.

It’s not 3D but it makes it easier to separate objects in the foreground, middle and background.

This helps in a few ways. The first is ease of editing. With these clearly defined layers users are able to pull off some Photoshop-like editing.

Objects and people can be added and removed with a tap of the screen. Pictures can be combined to even bring people from separate shots into one image.

Ladies, you want to put yourself in a photo next to Ryan Gosling or Channing Tatum? HTC One M8 makes it possible on a smartphone.

Photos taken with dual lens UltraPixel camera can also be refocused after they’ve been taken.

With all that depth information in the image a user can simply press on the part of the picture they’d like to bring into focus even if it is blurry when you first look at it.

Magically the blurred shape suddenly jumps into focus and can be saved as another version of the image.

It’s also possible to look around inside an image and view the picture from a different perspective almost like exploring a virtual reality image.

Other editing options also include adding animations like seasonal effects. You can make it snow in your picture or have leaves blowing in the background if you want.

And those people who love taking selfies will pleased to know the front facing camera is now 5-megapixel and even offers beauty mode so you’ll always be looking your best.

Also included with the One M8 is Zoe – an app that can put together your images and videos into a Hollywood-style trailer to share with family and friends.

The Zoe app is expected to create an even larger community of people sharing their creations. So much so HTC will even releases an iOS version of Zoe for iPhone and iPad users in late 2014.

One of the best features of the HTC One – the One M8’s predecessor, was the excellent front facing speakers.

Audio quality has been noticeably improved with a level of clarity you’d expect from a dedicated audio device rather than a smartphone.

Music lovers will be able their favourite tunes out loud without the need to put on a pair of headphones.

Also onboard is an IR Blaster that shoots from the top of the device through the on/off/lock key and let you control your TV and even give you a guide to what’s on.

There will be a number of accessories available for the HTC One M8 at launch including cases from Australian company STM.

But one of the most interesting comes from HTC themselves – the Dot View cover.

When the Dot View cover sits across the screen it places the One M8 is a special standby mode that allows the display to be visible through the small dots of the case.

You can see the time, the weather, see who’s calling and even answer and reject the call without opening the cover.

On the battery side HTC says performance has been improved by up to 40 per cent and incudes an extreme power saving mode that will allow the device to operate for days.

The HTC One M8 will be released in Australia on April 1. Optus, Vodafone and Telstra plan pricing has been announced. It is priced at $899 for outright purchase as well.

* Stephen Fenech travelled to New York as a guest of HTC