New sales of electric cars increased by 149 per cent in 2019 – but they still only make up a very small proportion of the nation’s cars and light trucks on our roads.

According to the National Transport Commission’s Carbon Dioxide Emissions report, electric vehicle sales increased from 2,357 in 2018 to 5,875 in 2019.

The release of Tesla’s Model 3 in 2019 makes up the majority of this increase.

Now there are a total of 14,500 electric cars on Australian roads but this just a drop in the bucket of Australia’s 18 million vehicles.

There are number of premium car brands like Porsche, Mercedes Benz and BMW joining Tesla to offer electric vehicles in the Australia market.

But these will be priced at the luxury end of the market.

More affordable models will arrive in the next three years from companies like Toyota, Hyundai and Mazda.

One of the key findings of the report was around emissions.

“If everyone who purchased one of Australia’s top 10 selling cars or utes last year had chosen the  best-in-class vehicle for emissions, Australia would have recorded a 63 per cent reduction in emissions intensity from the cars sold,” says Executive Leader Sustainability  for the National Transport Commission, Sandra McKay.

“Instead, Australia recorded a 0.2 per cent drop in emissions intensity.” 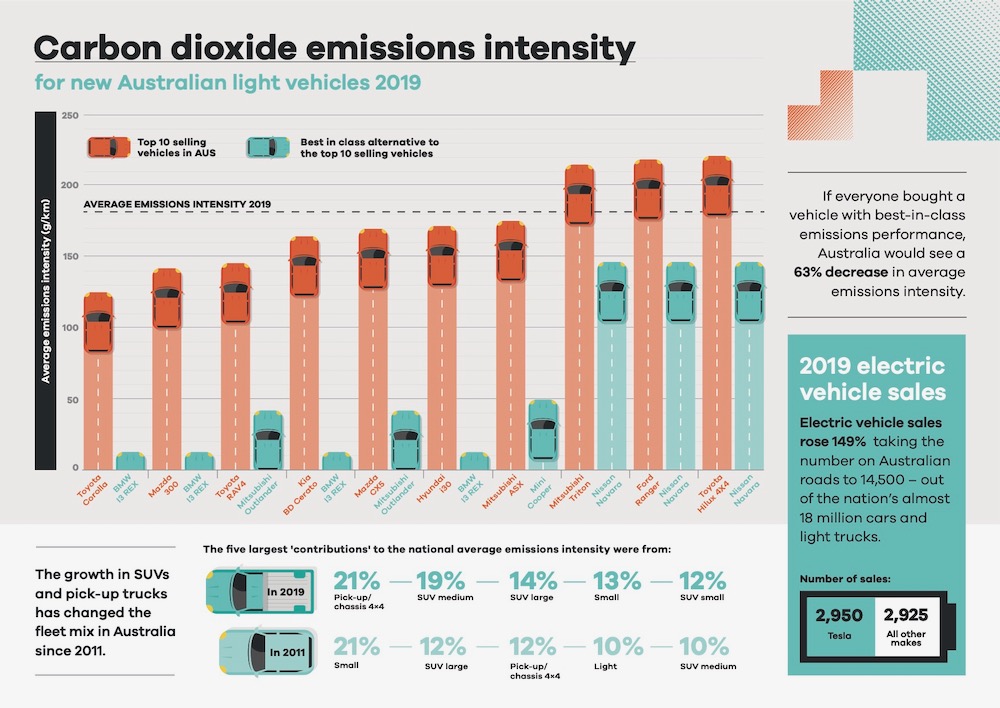 Australians preferences in the last decade has shifted toward heavier vehicles like SUVs with larger and more powerful engines.

But Europe and Asian countries are actually moving the other way towards smaller cars with lower emissions.

“With consumers becoming more aware of their carbon footprint and with the slow but increasing  popularity of electric vehicles we hope that our report will help anyone looking to purchase a new vehicle see how easily they can make a real difference,” Ms McKay said.

Other key findings in the report include:

– The average emissions intensity from government car fleets decreased by two per cent in 2019.

– Australia’s average emissions intensity for passenger vehicles in 2018 was 169.8 g/km, 41 per cent higher than for Europe.