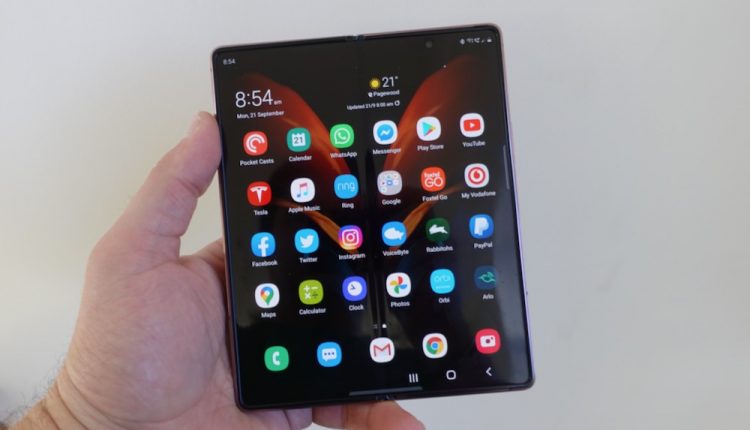 The Samsung Galaxy Z Fold2 is a bold new device that’s taken the feedback from the original model and poured that into a creating a vastly superior follow-up. For the right user, the Fold2 is a revelation that will open up possibilities and abilities that are just not possible with a regular smartphone.

Samsung has learned a lot from its first folding smartphone and as a result it has delivered a huge improvement with the follow-up model – the Galaxy Z Fold2 – which Tech Guide has been road testing for the last two weeks.

In this time we’ve come to appreciate its best features, its ideal uses and the customer it’s designed for. And also a few areas for improvement.

Like the original, the idea behind the Fold2 is to merge two devices into one – a smartphone and a tablet.

It’s certainly not for everyone. But for the right user, it’s a game changer.

That right user is someone who wants to be highly productive on the move and a person who enjoys creating and consuming content.

And if you’re all of those things, then you’re an even more likely candidate for the Samsung Galaxy Z Fold2.

The Samsung Galaxy Z Fold2 is slightly thinner and smaller than the original.

Even though you’re basically carrying the equivalent of two thin smartphones on top of each other – it’s still not too bulky and easily fits into your pocket.

On the right edge of the bottom layer of the folded Fold2 is a power key that doubles as the fingerprint reader.

The major part of the design is the hinge and this, too, has been radically improved. 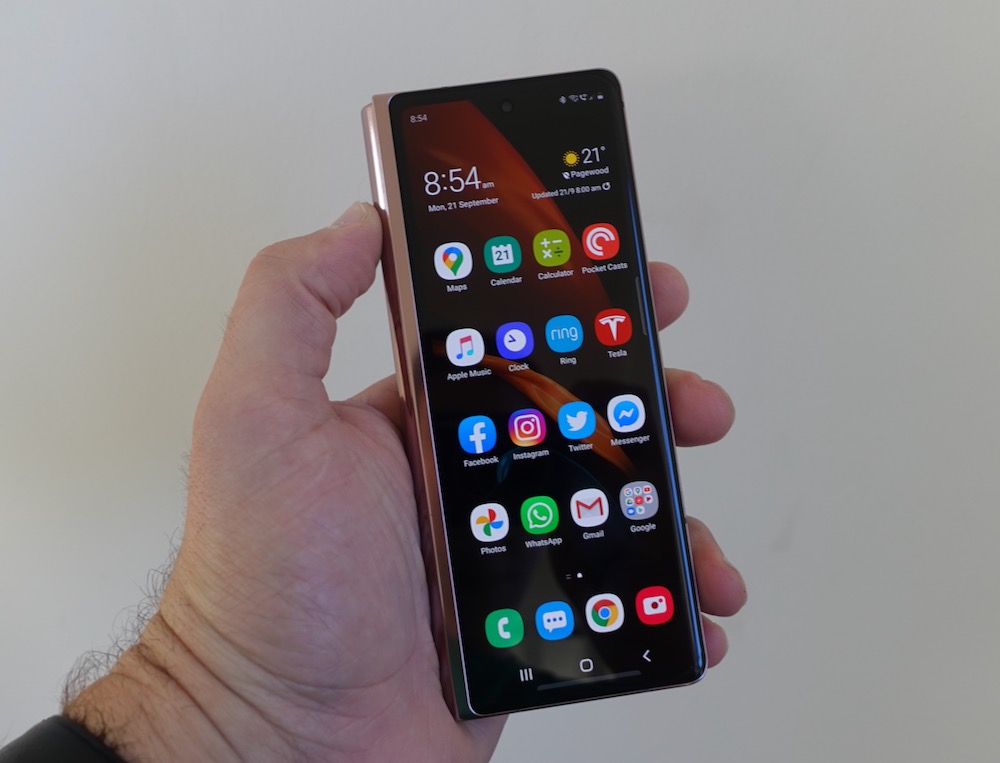 It has a built-in sweeper features to ensure no debris enters the hinge.

But the biggest improvement is the hinge’s ability to stay open at angle. This has enabled a new feature called Flex Mode – more about that later.

The Samsung Galaxy Z Fold2 has a 6.2-inch front screen that is long and narrow – and a huge improvement over the original which has a measly 4.6-inch display that was almost unusable.

This time out the 6.2-inch screen allows users to do a lot more without having to unfold the device.

Typing on the screen is a little easier – but not as easy as typing on a regular smartphone. 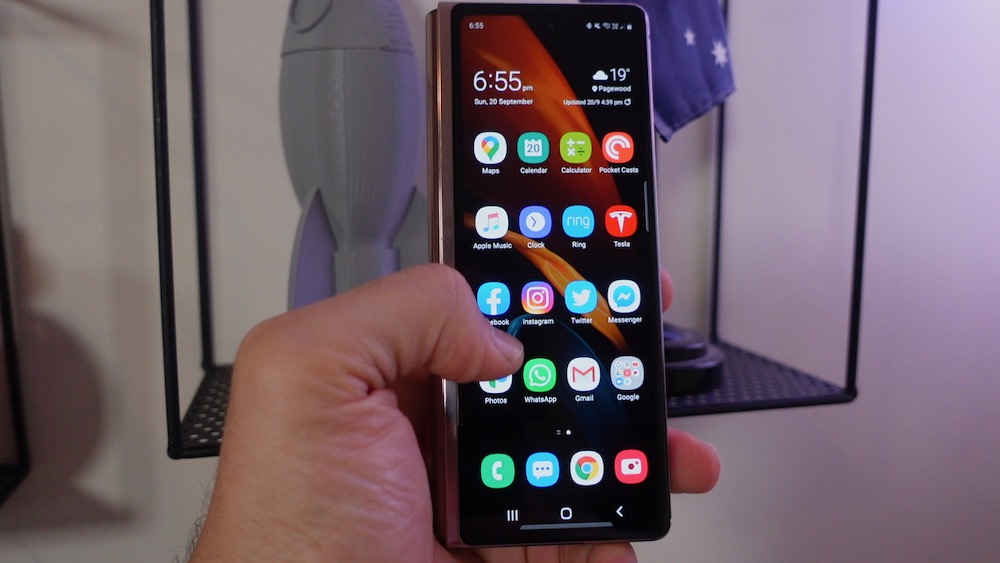 We did struggle at times with typing replies to messages and emails.

But the type size on the front screen is still quite small so for those who need glasses to read, you’ll need to pull them out.

But it was fine for making and receiving calls and also some apps.

The shape of the front screen is more like a regular smartphone and give you a more accurate representation of the app.

We found we spend half the time using front screen and the other half using the larger inside display. 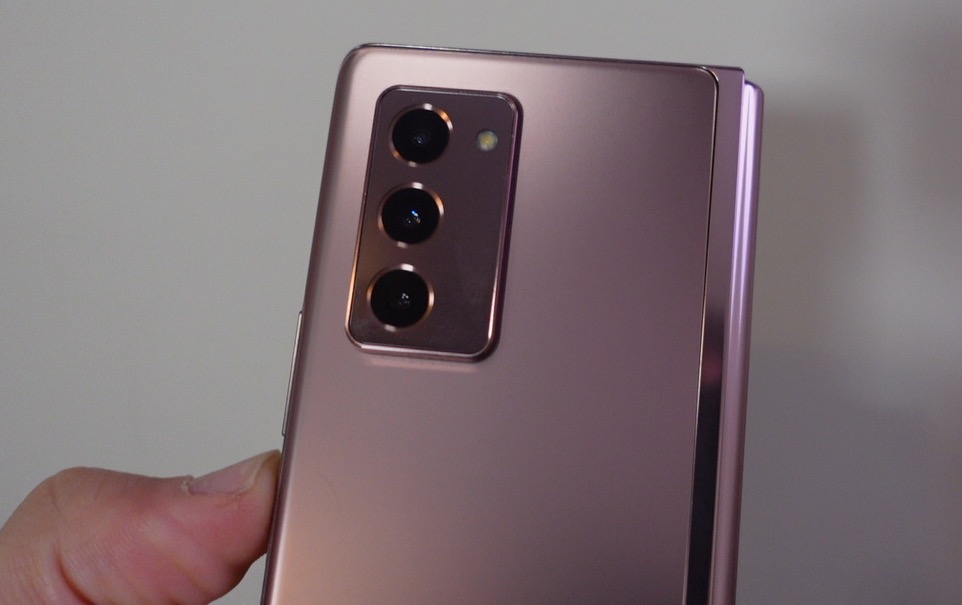 With the original it was more 20 per cent on the front screen and 80 per cent having to stop and open the device.

And most of the time the app that you are using on the front wad there waiting for you when you open the device.

Closing the device and going to back to the front screen sometimes bamboozled the app and we had to close all apps and start again.

The star of the Samsung Galaxy Z Fold2 is the inside 7.6-inch display that is actually covered with a thin layer of flexible glass.

This gives the screen a bit more gloss and also makes your content look good. 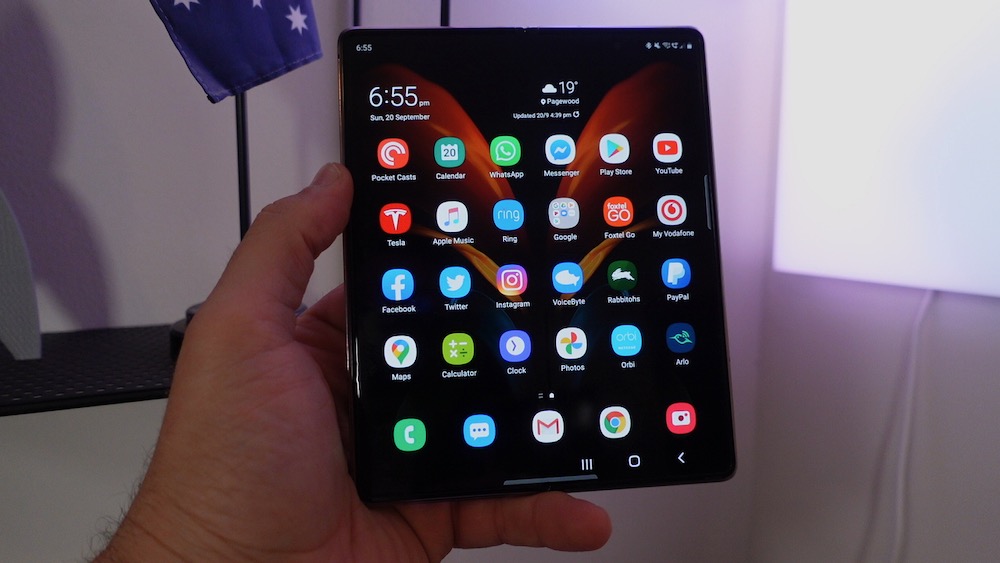 Thankfully Samsung got the memo about the unfortunate notch on last year’s model.

The Fold2 has no more notch – instead there is a hole punch for the camera which means there is even more room for your web pages, videos, pictures and apps.

But the square shape of the screen doesn’t always result in seeing an app in its best form.

When you look at an app you actually see less content at a glance than you would on a regular smartphone because of the longer shape.

Watching videos and viewing websites are a lot more comfortable with the Fold2. 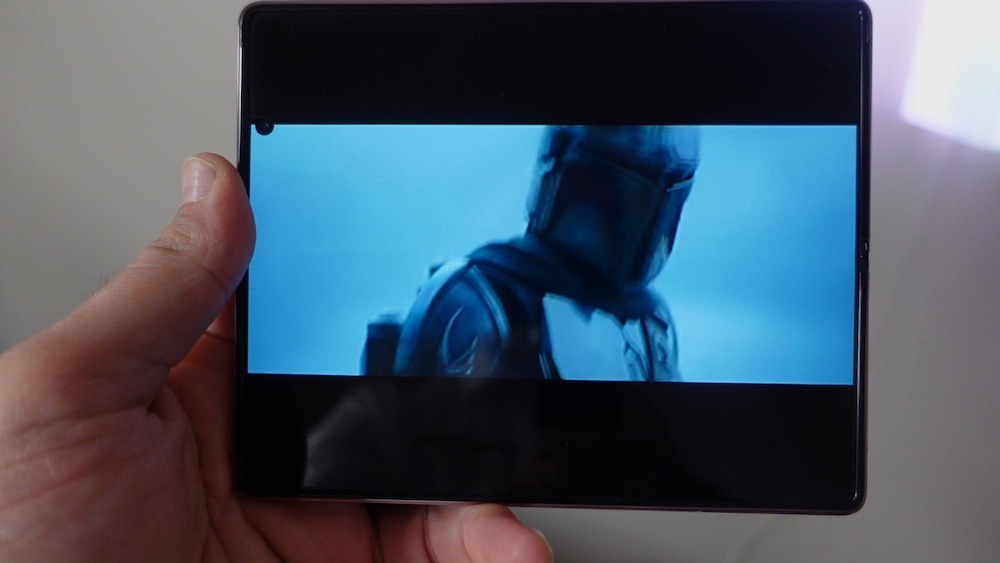 And it’s a shame we’re not travelling right now because the Fold2 would be an ideal companion to watch your content without the need to pack an additional tablet.

The device’s AKG-tuned speakers are also quite impressive and provided an excellent audio experience.

The Samsung Galaxy Z Fold2 has plenty of power under the hood and is also 5G compatible so it can connect and download content even faster when in range of a 5G network.

The device can easily handle multi-tasking and also be used in DeX mode so you simply connect to a monitor and keyboard and mouse and you’ve now got a powerful desktop computing experience.

The device is powered by Qualcomm SM8250 Snapdragon  865+ 7nm processor with 12GB RAM and up to 512GB memory. But there is no memory card slot to expand the memory.

The big drawcard of the Samsung Galaxy Z Fold2 is the ability to multi-task and have up to three apps running on the main screen.

When you open up one app, you swipe in from the right side to open up the app tray and drag in another app. 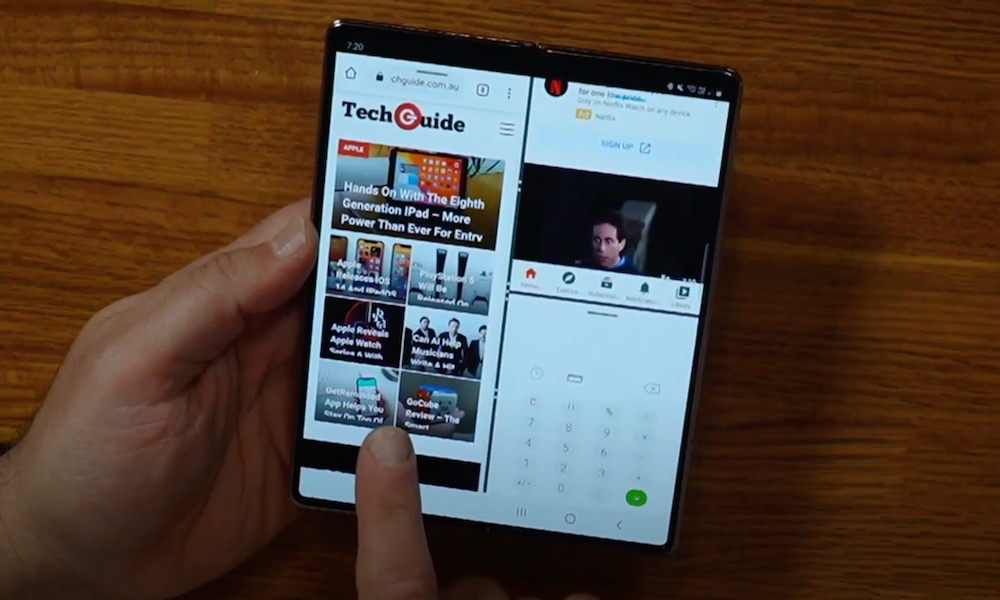 And if you want to bring in a third app you can as well. You might have email with a browser and a calculator.

And if you are working on a document you can also drag and drop text from one of these apps as well.

With the newly-designed hinge it now also possible to open up the Fold2 at any angle. It can even rest open on your desk like a little laptop.

There have also been apps optimised to take advantage of the Flex Mode. 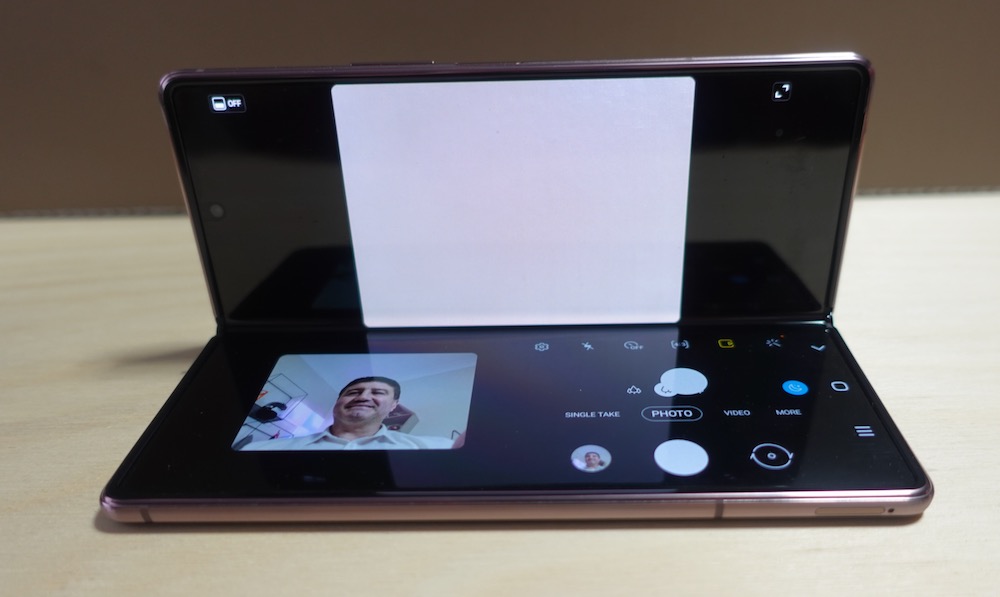 One is the camera. In Flex Mode you can aim the camera at yourself for an easy selfie.

It also works well with YouTube with the video taking up to the entire top half of the screen so you can angle the screen into a comfortable position. 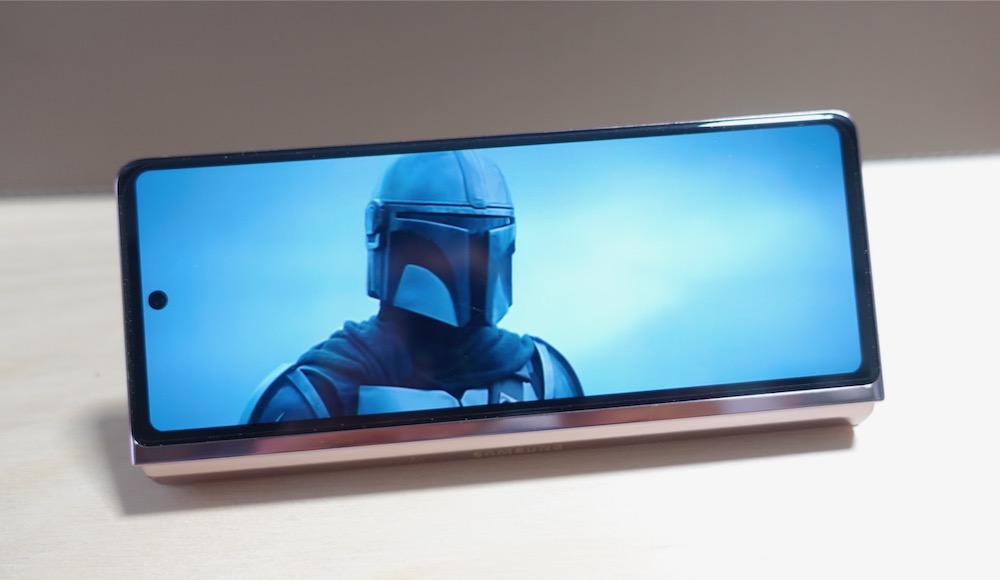 The Samsung Galaxy Fold2 has a triple 12-megapixel camera system on the back of the device.

But there are also two other cameras including the front 10-megapixel selfie camera and the inside 10-megapixel camera.

The quality of the camera is excellent – it’s similar to the camera system on the Galaxy S20.

One cool feature is the ability to have the front screen on so your subject can see themselves before their photo is taken.

The Samsung Galaxy Fold2 has a battery in two parts – one on each side of the phone with a combined capacity of 4,500mAh.

We used the Fold2 as our daily driver and it easily got us through the day despite the fact you’re powering two screens.

The Samsung Galaxy Z Fold2 is priced at $2,999 which isn’t cheap but it is the same price as last year’s model so the upside is you’re getting a much better device for the same price.

This phone isn’t for everyone – for a start it’s not in everyone’s budget – but also not everyone wants this much phone. 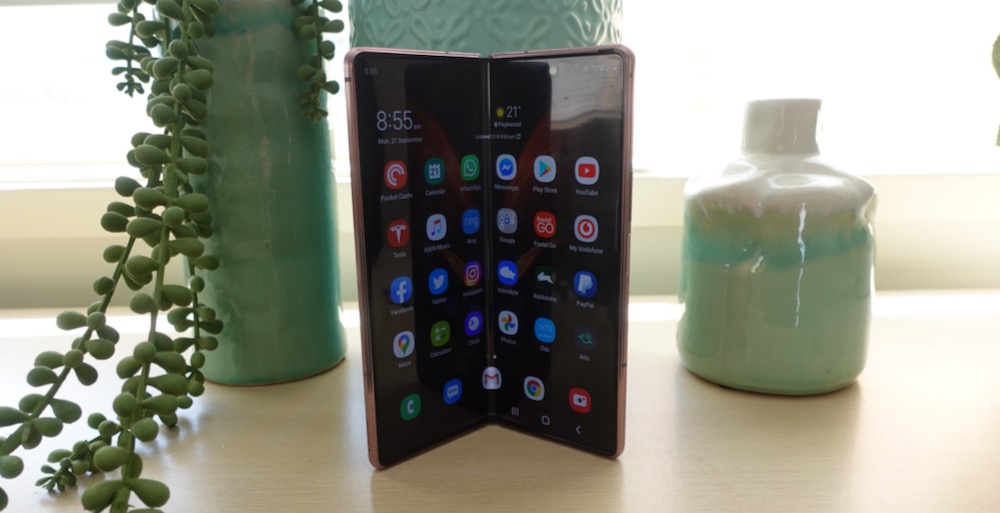 You need to be a committed high-end smartphone user to be rocking the Samsung Galaxy Z Fold2. To these users the device is an investment. The people who are not the right customers will just see it as an expensive device.

The Samsung Galaxy Z Fold2 is a bold new device that’s taken the feedback from the original model and poured that into a creating a vastly superior follow-up. For the right user, the Fold2 is a revelation that will open up possibilities and abilities that are just not possible with a regular smartphone.