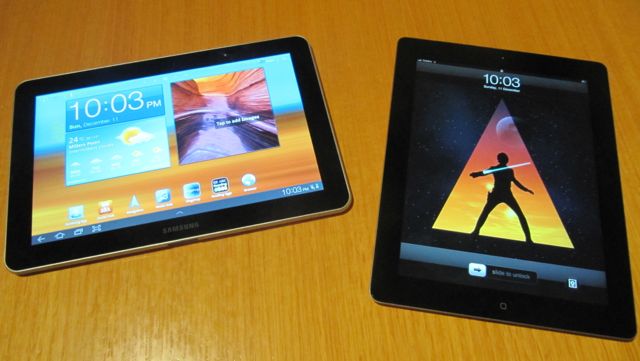 After months of legal wrangles, Samsung has won the right to sell the Galaxy Tab 10.1 in Australia. Here’s our review.

This is the tablet Apple tried to block from Australia customers.

The saga has already been played out in the courts with Apple taking the early lead with an injunction which prevented Samsung from marketing, advertising and selling the Galaxy Tab 10.1 in Australia.

But that decision was reversed and Apple sought leave to appeal which was also overturned.

The result was a lot of free hype about Samsung’s latest 10.1-inch tablet.

The reason Apple took legal action to stop it from being offered for sale in Australia was because there were allegations of patent breaches both in design and touchscreen operation.

Tech Guide has been using the Samsung tablet since barely hours after Apple’s attempt to have it banned failed in the Federal Court.

So was it worth Apple going to all that trouble to stop it? Yes.

But it is just an iPad 2 knock-off? Not really.

While there are many similarities between the iPad 2 and Samsung’s Galaxy Tab 10.1 there is more that stands them apart.

The bezel around the screen and the steel edge of the Galaxy Tab 10.1 looks a lot like the iPad 2’s.

But the Samsung device is a lot narrower to give it more of a widescreen display size.

It is also designed to be held in the landscape or widescreen position – which means the Samsung logo on the front is the right way up and the web cam is also positioned along the middle of the top edge.

The iPad 2, on the other hand, is meant to be held in portrait mode – that is the screen is longways with the home button along the bottom edge which placed the camera in the middle of the top edge.

Of course both have built-in accelerometer’s so the display can adjust depending on how you are holding it.

One of our only gripes is this accelerometer is not quite as responsive as the iPad 2’s and we had to wait a few seconds at times for the screen to adjust to the correct orientation.

The Galaxy Tab 10.1 has a dock connector/charger along the long bottom edge while the top edge has the on/off/lock button, volume control, headphone jack and, if you have the 3G model, the sim card slot.

On the left and right edges are stereo speakers and the back, which is made mostly of white plastic, is a 3-megapixel camera with LED flash. There is also a 2-megapixel front camera.

As we’ve mentioned the natural position of the Galaxy Tab 10.1 is to be held with the full width of the screen left to right. The speakers are also placed left and right when the device is held in this position.

But that’s not to say holding it vertically, or longways, isn’t just as easy. Holding it in this fashion means more of a website can be viewed at once.

The Galaxy Tab 10.1 is one slick product in design and performance.

Running Android operating system 3.1, the device is very responsive and fast. It is effortless to move between home pages and apps spring open instantly.

And it’s all thanks to the 1.2Ghz Dual Core processor which offers a surprising amount of power to get complete your tasks.

There are widgets which can bet set up on as many as five home screens which offer shortcuts to your favourite websites and contacts and keeps handy information like the latest news headlines and weather forecasts at your fingertips.

When entering text on the tablet’s virtual keyboard it was possible to type just as fast as we would on a physical keyboard and the Galaxy Tab 10.1 kept up effortlessly.

A handy feature especially since the device can be used for note taking, email and web browsing.

Speaking of browsing, the experience was as rich as it is on the desktop or laptop.

And it has full Flash support so the sites with multi-media content will not only also work as well as they do on your computer, they’ll also look as good too.

The multi-touch screen allows users to pinch to zoom as it does with every other tablet, including the iPad.

But the Galaxy Tab 10.1 also has a handy zoom feature which allows users to create two points of contact on the screen and then tilt the tablet forward or back to zoom in and out on a page.

For email the device can cover all of your needs including support for Microsoft Exchange ActiveSync for secure corporate email accounts and synchronised data.

Another surprise was the quality of the stereo speakers aboard the Samsung Galaxy Tab 10.1. Whether it’s listening to music or watching a movie the audio output more than held its own.

And if you want to stay close to your social networking sites, the device can deliver just that with the Social Hub which cab gather your Facebook, Twitter and LinkedIn feeds and display them as one stream.

There are two cameras aboard the Galaxy Tab 10.1 – a 2 megapixel front camera for video chatting and a rear 3 megapixel camera which is also capable of recording 720p video.

If it’s content you’re after there is no shortage of material which can be accessed and enjoyed directly on the device.

Apart from the apps which can be accessed from the Android Market, there is also a Samsung Apps portal which is where you’ll apps to access games, music, books and magazines.

Also included for free with the Galaxy Tab 10.1 is Polaris Office – a software application which can open and edit Microsoft Office applications like Word, Excel  and PowerPoint in the same way you would on a computer.

It offers a number of features the iPad 2 lacks but still can’t match Apple’s product in terms of design polish and the number of apps available for the device.

But that’s not to say the Samsung tablet isn’t playing in the same weight division as the iPad 2. It is.

If you’re after a tablet computer the Samsung Galaxy Tab 10.1 should definitely be near the top of your shopping list.

Red Dog the sixth highest selling DVD of all time