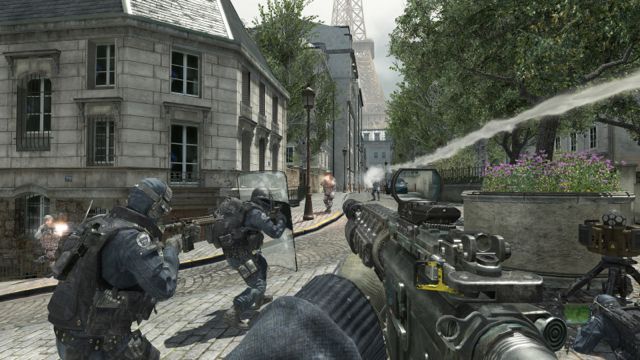 Call of Duty: Modern Warfare 3 is not due for release till November but Tech Guide played the highly-anticipated title’s multiplayer.

There are lots of changes, the result of brutally honest user feedback, which has made the game equally attractive to new players as it is to hardcore fans.

The improvements to the game by developer Infinity Ward will suit many different playing styles with pointstreaks rewarding team play as much as high kill counts.

With Kill Confirmed players have to collect dog tags from killed teammates and enemy players. If you kill an enemy player you get the kill and then if you collect the dog tags the kill is confirmed and you receive bonus points.

But if a teammate is killed and you collect the dog tags then that kill is denied for the opposing team.

What it does is encourage teamwork but at the same time attracts the enemy like a moth to a flame. The results is some pretty intensive game play.

We got to play five of the Modern Warfare 3multiplayer maps – Village, Underground, Arkaden, Dome and Resistance.

Village was looked like it was set in an African jungle outpost with a cluster of small buildings one pocket of the map plus some deep ravines which provide ample cover to get from one side if the map to the other.

Underground is played out in a ravaged London train station with the action taking place from street level all the way down to the platform and even aboard the stationary trains.

Arkaden is a battle damaged shopping arcade with bars, shops and lots of glass. There are lot of tight corners, narrow passages and multiple levels and escalators to navigate while on the lookout for enemy players.

In Dome the most noticeable building is a gigantic communication dome in an arid desert setting which is surrounded by fences, shipping containers and a tunnel that can get players from one side of the map to the other.

Resistance was set in the back alleys of Paris complete with French vehicles on the streets, French signs and small gardens scattered around the cobble pavements. A lot of winding narrow streets which can be used to surprise and flank your opponents.

On the disc there will be 16 multiplayer maps set in Africa, New York, Paris, London and Germany among other places with Infinity Ward planning to release more content like new maps packs and other downloadable content on a regular basis.

With the weapons, players will be able to level up their gun to enable features like less kick and less flinching so you can maintain aim even when being hit by enemy fire.

Players can also add attachments like a red-dot sight, silencers, holographic sights and a new dual scope which has a close and long range scope that players can switch between on the same weapon.

You can also hold your breath when aiming with some other weapons other than the sniper rifles.

There’s also plenty of detail in the maps from the actual texture of the surfaces in the game to the signs, vehicles and other smaller objects found on the map.

Killstreaks are now called pointstreaks and reward players in different ways and can be set depending on the type of player you are.

Point streaks offers rewards for completing objectives and don’t reset to zero when you die so players are encouraged to continue their support and defensive roles.

There are three types of pointstreak packages.

The first is the Assault Strike Package, much like the old killstreak, is for more aggressive players and this resets to zero when you’re killed. The rewards include predator a missile and helicopter.

Next is Support Strike Package which offer perks like UAV, Counter UAV and the SAM turret to knock down enemy aircraft. This package does not reset when you die.

Lastly there’s the Specialist Strike Package which unlocks additional perks which can be used until you die. These reward perks can be used along with your regular perks included with the class you created in the home menu.

There are now onscreen notifications to let you know how many kills or points you are away from your next reward which increases your situational awareness in the game.

Call of Duty: Modern Warfare 3 is available on November 8.