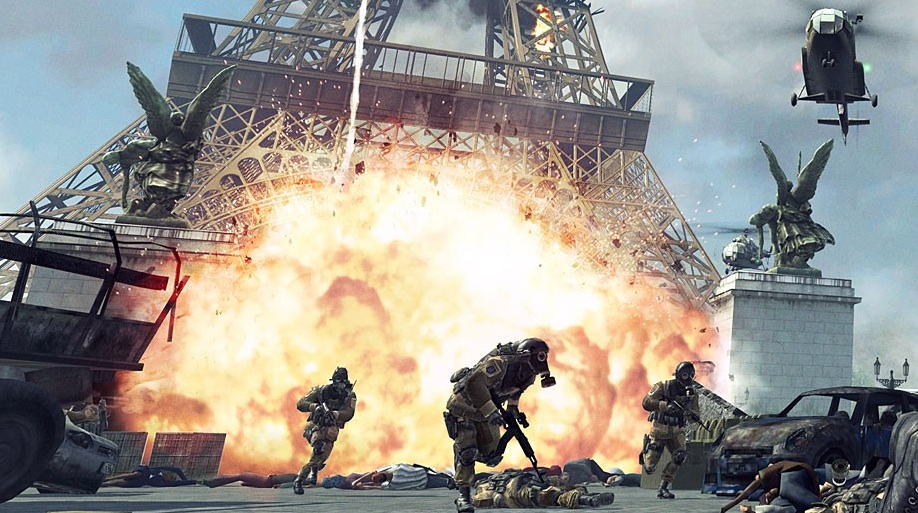 Call of Duty Modern Warfare 3 has managed to not only maintain the quality of its predecessor – but significantly exceeded it.

The third chapter of this wildly successful franchise will not disappoint die-hard fans with a break-neck paced campaign and an online experience that raises the bar higher than ever before.

Modern Warfare 3 picks up right where the previous title left off and, if you’re new to the game, there’s not much by way of background or summary so it’s head first into the action.

The game opens on the devastated streets of Manhattan’s financial district and moves to its rooftops and, before you know it, you’re piloting a gunship and firing at enemy helicopters as you zip between the skyscrapers.

And that’s the pace you’re going to have to get used to because as soon as you get your breath back you’re planting an explosive on a Russian submarine in New York harbour before storming the bridge and zipping between exploding Russian vessels in a speedboat on the surface.

The storyline has its obligatory twists and turns and, at times, gets very confusing. But the objective is still trying to find Russian enemy Makarov who has turned the major cities of the world – New York, London and Paris into warzones.

And it’s not always about carrying a big gun and shooting at the enemy – players get a chance to pilot a number of vehicles and complete some inventive objectives.

Modern Warfare 3 has taken the “if it ain’t broke don’t fix it” attitude and has basically taken the already excellent Modern Warfare 2 engine and added several layers of polish and ratcheted the action up to 11.

The game looks amazing with life like characters, reactions and environments and a soundtrack that will rock every one of the speakers in your surround sound set-up.

And while the campaign is very satisfying and delivers the final arc of the story line, it is the multiplayer online mode that helps Modern Warfare 3 knock it out of the park.

The multi-player, like the campaign, has a familiar look and feel but with some improvements and enhancements thrown in.

It wasn’t necessary to re-invent this part of the game but developers Infinity Ward and Sledgehammer have done a great job in tweaking various parts of the game to improve the experience.

We couldn’t pick a new feature that we didn’t like.

The 16 maps are among the best we’ve ever seen in a Call of Duty game. They are well-thought out and provide a great variety of locations for close quarters combat, strategic play and team work.

Kill Confirmed requires players to collect dog tags after an enemy is killed to register the kill for your team. It is also possible to deny your opponents a kill by collecting your fallen teammates’ dog tags yourself.

This means players are drawn towards the action to collect the dog tags rather than lurking or “camping” in the shadows waiting to pick you off.

In Team Defender players must claim the flag for their team and, rather than taking it to a designated point on the map, they must hold on to it and defend for as long as they can.

Players can still work their way up the ranks and there are always points, skills and perks to unlock along the way.

This time out even your weapon can level up and earn features like less kick and increased bullet damage.

One of our favourite weapon perks was Focus which meant players would flinch less under fire and hold their aim at the enemy.

An important one when it comes two opposing players draw their weapon at the same time – this means it comes down to who has the best aim rather than just who shot first.

On top of the campaign and multiplayer in Modern Warfare 3, there’s also Spec Ops which presents 16 objective-based missions so players can try and beat their best score or time.

The new Survival Mode is also a great way to sharpen up your skills and allows players to play solo, with friends or online and face wave after wave of enemies in any of the 16 multiplayer maps.

Call of Duty Modern Warfare 3 is arguably the best first person shooter ever released with an explosive campaign and a multiplayer experience that is unrivalled.

Co-developers Infinity Ward and Sledgehammer have been careful to maintain the core qualities of the game while adding clever improvements across the board.

This will satisfy hardcore players and also delight those who are new to the Modern Warfare world.

Telstra to offer iPad 2 on a contract