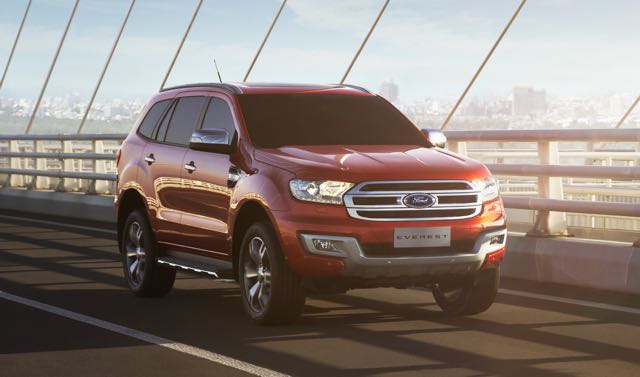 The technology under the hood of the new Ford Everest SUV

When it comes to choosing your next car, the amount of technology literally under the bonnet is going to play a big part in that decision. This is something Ford is well aware of and the reason why the company has invested so much time and research into the technology of its vehicles.

The new Ford Everest SUV (sports utility vehicle), which was completely designed and developed in Australia, is a good example of how the latest technology can be integrated into the 21st century car.

And it’s not just about being able to pair your smartphone and your entertainment options.

Ford’s technology advances are also playing a major role in keeping the driver and their passengers safe as well.

The Everest has a body-on-frame construction with intelligent four-wheel drive and coil spring suspension for a smooth handling on and off the road. 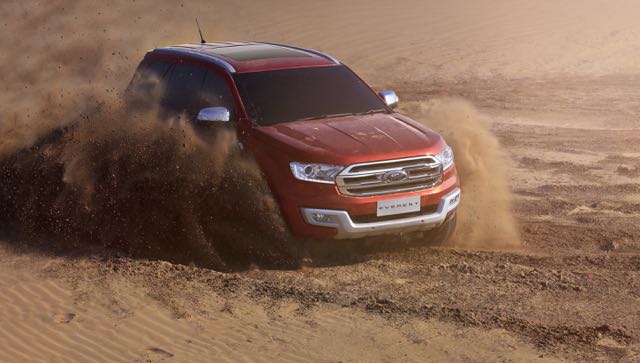 It can seat seven in comfort and yet can fold the second and third row of seats at the press of a button to offer an impressive 2010 litres of cargo space.

The Ford Everest is powered by a 3.2-litre six-speed Duretorq five-cylinder TDCi diesel engine with 143 kW of power and 470Nm of torque.

Ford estimates that by 2020, 29 per cent of the world’s vehicles will be SUV models – up from today’s figure of 23 per cent.

This is a space Ford pioneered with the introduction of the Bronco 50 years ago.

Today Ford’s goal with the Everest is to create an SUV that’s fun to drive with a premium level of comfort and convenience along with a wide range of off-road capabilities.

Ford has achieved this advanced connectivity and driver assist technologies. 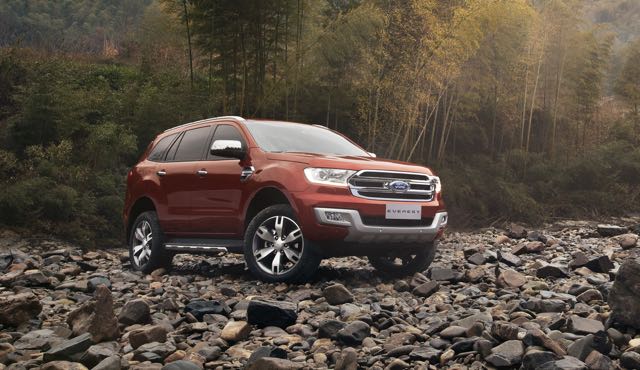 Tech Guide was fortunate enough to be invited by Ford to see the Everest’s capabilities in normal driving conditions and off-road through a variety of terrains in Chiang Rai in northern Thailand.

We were given the opportunity to experience the vehicle’s capabilities and see first hand the role technology plays in achieving the desired outcome for the driver.

In the same way your noise cancelling speakers can reduce ambient noise so all you hear is the music, Ford had taken that same active noise cancellation technology to reduce the impact of low frequency engine noise being heard in the cabin.

There are number of microphones scattered around the interior headliner of the Ford Everest to detect and measure noise and then generate opposing soundwaves through the car’s audio system to cancel out the unwanted noises. 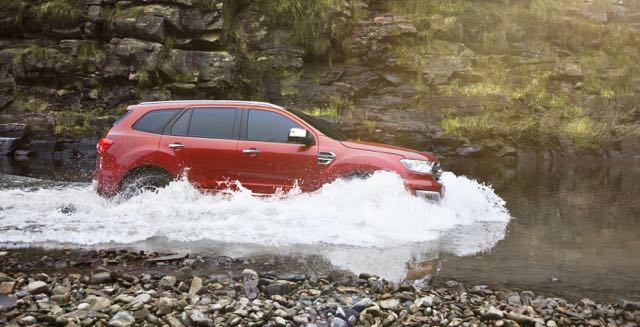 The result was a whisper quiet ride.

Once when we got into the car we didn’t realise the engine was running and mistakenly tried to start it again.

Even when driving over gravel and other surfaces, the usually noticeable sound was barely heard in the Ford Everest.

There are two discreet front facing cameras that are trained on the road’s lane markings that can detect when the Ford Everest is drifting out of the lane.

At first the car offers a visual alert followed by an audio alert to warn the driver. 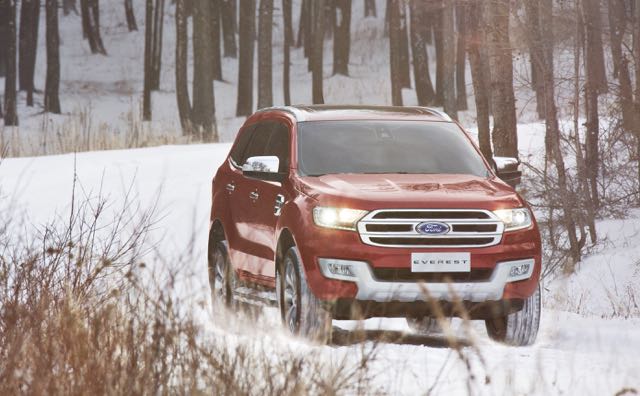 If the car continues to travel further outside the lane, there will be haptic feedback to strongly vibrate the steering wheel in the driver’s hands.

There are two radar sensors positioned to monitor if another vehicle enters the car’s blind spot while you’re driving.

This activates an LED indicator in the corresponding left or right wing mirror to let the driver know it is not safe to change lanes or overtake.

When reversing out of a parking space it is often difficult to see if there are any cars passing behind you.

The Ford Everest makes use of the radar sensors for a cross traffic alert to ensure the driver doesn’t back out into the path of the car.

It can detect vehicles travelling at up to 60km/h.

The reflexes of the Ford Everest are always going to be better than even the best driver so when the sensors detect a possible collision the driver is given a visual and audio alert.

But on top of that the vehicle’s brakes are automatically charged so that by the time the driver lifts their foot off the accelerator to the brake it has helped make the car stop faster.

It’s one thing to have cruise control – nearly all modern vehicles have it onboard.

But in the case of the Ford Everest, the adaptive cruise control can not only keep you at the pre-determined speed but it can also maintain a safe distance from the car ahead of you.

And if the gap between you and the vehicle ahead changes, the Everest’s system can react and then return to the chosen speed and distance.

There are a number of gyroscopic sensors aboard the Ford Everest that can detect the cars level and angle and then apply the brakes to specific wheels to avoid a rollover.

The same sensors also come into play if a driver misjudges a curve and applies the brakes to ensure the car stays level. 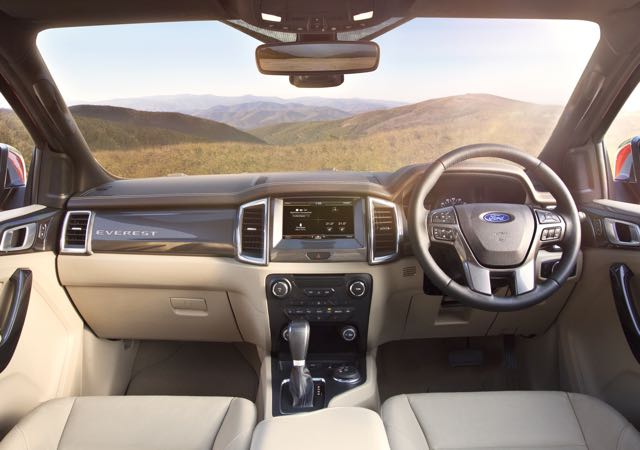 Also included with the Ford Everest is Active Park Assist which, as its name suggests, can scan for parallel parking spaces and steer your car into the spot.

All the driver has to do is apply the accelerator and brakes as instructed by the vehicle to ensure a perfect park that’s the right distance from the gutter and cars in front and behind you.

Ford was released its second generation of Sync – the system designed to connect to mobile technologies to keep the driver informed, in touch and, most importantly, in control.

It also features advanced voice control that can recognise more than 10,000 commands. 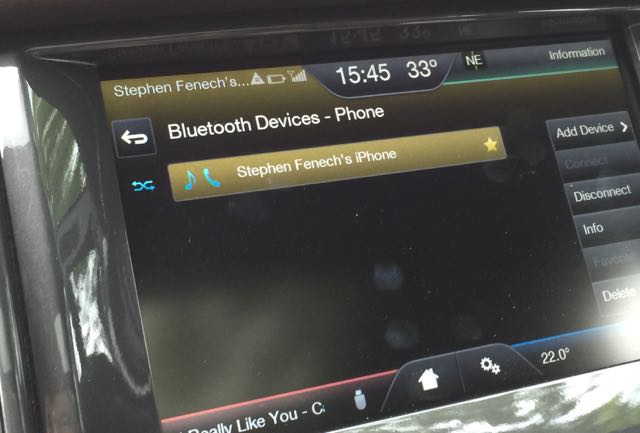 For example, you could say “I’m hungry” and Ford Sync 2 will not only understand you buy also give you directions to the nearest restaurants and cafes.

Tell the Ford Everest “find a car park” and it will do just that without taking your eyes off the road or your hands off the wheel.

The Ford Sync 2 system is accessible through the sharp touchscreen that is divided into four quadrants – Phone connectivity, navigation, climate control and entertainment. 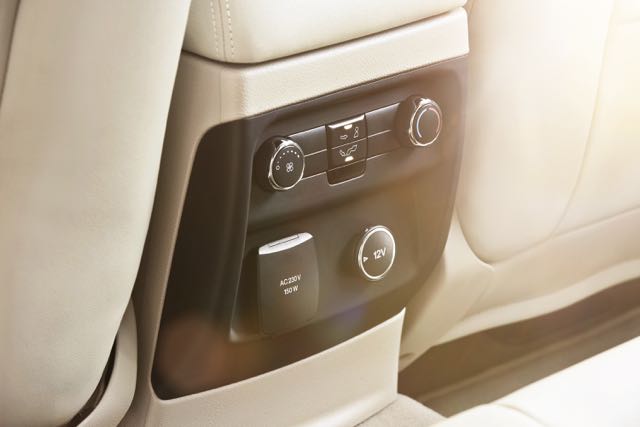 Pairing a smartphone is a simple two-step process and drivers can not only make and answer their calls through the Sync 2 but also stream music from the device via Bluetooth to the car’s excellent audio system.

Ford paid special attention to the connectivity and power needs of the modern driver.

There are two USB ports within easy reach of the driver under the central console to easily connect a smartphone for charging.

The USB port can also be used to play music from a USB flash drive. 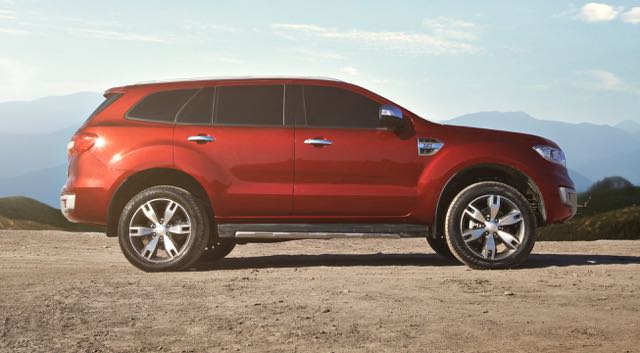 For the rear passengers there are surprisingly no USB ports but a proper 230V connection so you can plug in a laptop in the backseat along with 12-volt charger that can also be utilised (with an adaptor) to charge devices like smartphones, tablets, e-readers and other USB-powered devices on your journey.

The Ford Everest will be manufactured at AutoAlliance in Rayong, Thailand. It will be available across the Asia Pacific region in the coming months.

* Stephen Fenech travelled to Chiang Rai, Thailand as a guest of Ford