Look under any computer desk or behind a TV and there’s a good chance you’ll find a long powerboard with several connections. Well now that powerboard has been redesigned and reinvented with the PowerCube.

The PowerCube – as its name obviously points out – is a cube that has a power socket on four of the sides of the cube.

The bottom has a 1.5m power cable to connect to a wall socket while the sixth side has two USB charging ports that can charge your smartphone, tablet, wearables and e-reader.

And it’s all contained in a product that’s as big as a Rubik’s Cube. 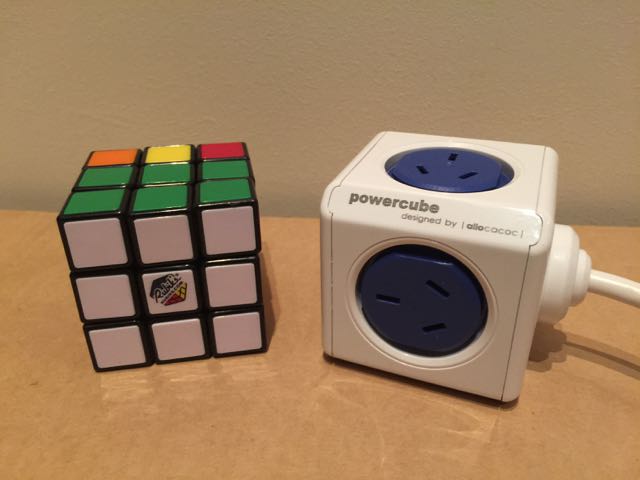 The smaller size and convenient shape only takes up only a fraction of the space as a regular powerboard.

Another drawback of a flat powerboard is that sometimes a big plug, like an adaptor or power supply plug, intrudes into the space of the plug adjacent to it and makes it unusable.

But you won’t have that trouble with the PowerCube because each plug has it’s own side of the cube and won’t impinge on any other socket.

It’s also possible to mount the PowerCube with the included plate that clips over one side of the cube. This means you can locate it conveniently under or on the side of a desk.

The only downside of that is that you lose one four power sockets because that’s the only place the mount clips onto the product.

When mounted the cube can spin 180 degrees to accommodate your plugs and the direction they need to go.

The PowerCube is fully grounded and all of the sockets are childproof.

There is also a PowerCube model with five power sockets and no USB ports.

The PowerCube is priced at $29.95 and is available now from Officeworks and Dick Smith and come in four colours.