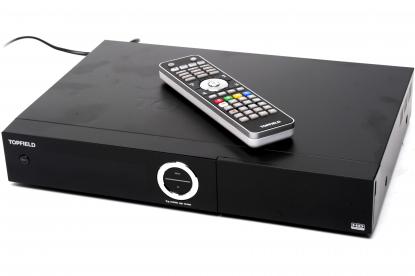 If you don’t want to miss a program – even when some of your favourites are on at the same time – then the Topfield PRF-2470 PVR can be just the solution.

One of the key features of the Topfield set top box recorder is it twin tuners with quad channel recording which means you can record up to four programs at once.

The high definition set top box has a built in 1TB hard drive which provides plenty of storage for all your recordings. And it’s possible to add another 1TB by connecting an external hard drive.

And if there’s content on your network you can easily stream music and movies through the Topfield TRF-2470.

The Topfield TRF-2740 isn’t going to win any design awards. It has a Spartan look but, hey, you wouldn’t be buying this type of product for its looks.

The front panel has a power button, a small display to show the current channel and a menu/ok button plus volume/channel up and down.

There’s also a USB port behind a flap on the right side for firmware updates and data transfer.

There’s also a subscription card slot behind the flap but this is not required for free-to-air use. This would be only be used in territories where the Topfield can access pay TV services.

On the rear panel is component, composite and HDMI connectivity plus an Ethernet port, another USB port, coaxial and optical digital audio output, an eSATA port to connect an external hard drive and, of course, Antenna In and Out.

Once the Topfield is hooked up to your antenna, your internet connection with an Ethernet cable (no wi-fi onboard unfortunately) and connected to your TV – it’s simply a matter of scanning for channels and also checking if there are any firmware updates in the Installation section of the menu.

All of these menus can be easily accessed using the included Topfield remote control.

Accessing the content on your network is done through the Entertainment menu which has a sub menu called Home Media.

The menu system, like the design of the product, is fairly plain but it does the job of offering relatively easy navigation of the system.

The Topfield TRF-2470 makes recording easy whether it’s directly from the included EPG (electronic program guide), using the timer or using the Intelligent Recording feature which can automatically link other episodes of the same program to record.

And being a quad channel recorder users can record up to four channels at once. But there is one thing to note with this feature.

This feature is controlled by the channel frequency with several channels under one frequency.

So while you can still technically record four channels at once – two have to be within the same channel frequency.

For example you’d be able to record 9 and Gem and 7 and 7Mate.

And accessing your recordings is easy through the menu as well as playing back your recorded files with the navigation keys on the remote control.

With the 1TB hard drive on board there is room for up to 430 hours of recording.

Playback of content access through the USB port was also very easy. The Topfield TRF-2470 is compatible with a wide range of video, music and picture codecs like MPEG4, DivX, AVI, MP3, WAV and JPEG.

One thing that impressed us was how fast you could change channels.

Changing channels on our Samsung television takes eight seconds but the Topfield manages to switch in four seconds – that’s twice as fast. A great feature for channel surfers.

On the downside the unit is quite loud thanks to an over zealous cooling fan. It is clearly audible in a quiet room and needs to be tucked deep into an entertainment cabinet to dampen the noise.

While not boasting the big name of a brand like Samsung, LG, Sony or Panasonic – the Topfield TRF-2470 is still a worthy device that can fulfil all your recording and content playback needs.