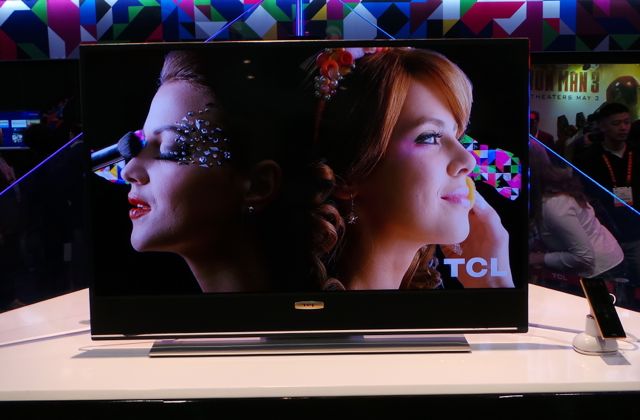 TCL has often been described as the biggest brand you’ve never heard of. But the Chinese company, which has been around since 1981, has gone from the No 7 brand TV in Australia to No 4 in less than 12 months.

TCL had a significant presence at last week’s Consumer Electronics Show and had an impressive range of products on it stand.

One thing TCL is doing in Australia is convincing consumers that “Made In China” still means quality and value.

And judging by the products on its stand at CES, TCL is not going to have to work too hard to persuade Australian customers its products are worthy of strong consideration.

Another attractive feature of TCL products is the price. On average TCL products are about 20 per cent cheaper than similar products from other bigger brands.

And if the range of products that will hit Australia in 2013 is anything to go by, customers will be getting the equivalent of a super supreme for a ham and pineapple price.

TCL will release its MoVo range which is voice-controlled with Google TV on board with plans to have even more Australian content to choose from.

There will also be a stand-alone Google TV box that can turn an existing TV into a smart TV and connect users to a wealth of content.

Another product that caught our eye on the TCL stand was the Ultra Surface, a large LED screen that has two amazing features – the entire TV’s display is a touchscreen and it is also has a Windows 8 PC onboard.

The hero TV products in Australia will include the E5600 Series (available in 32, 46, 50 and 55-inches) which is a 3D smart TV with LED Edge technology and thin bezels.

One product to prove TCL can produce quality products at a value price is the Blade TV. This 3D LED TV is only 11mm thick and looks stunning.

Ultra high definition and 4K were very popular at CES this year and TCL wasn’t about to be left behind.

It also had an Ultra High Definition 65-inch television that is no doubt going to attract attention with a competitive price.

Smaller Ultra High Definition and 4K TVs have also been announced at 55-inch and 65-inch sizes and will be slightly cheaper than those larger 84-inch models but will still significantly more expensive than a full high definition TV of the same size.

There were a number of other quirkier products on the TCL stand including a children’s story book and smart pen which can link a book to the screen and allow the child to interact with and follow the story.

Also on the TCL stand was its Ice Screen – a large 26-inch Android tablet which can be viewed in portrait or landscape mode and linked to a smartphone or connected to a TV tuner dongle to turn it into a TV and easily carried around the house.

One of our favourites was the TCL Smart Window which is a TV mounted to the wall in portrait mode that, when it’s not being used as a TV, can display a landscape scene as if you’re looking out a real window.

They say it’s all about the view in real estate and the TCL Smart Window can provide a million dollar view for a fraction of the price.