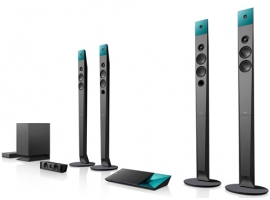 Sony’s next Blu-ray home theatre speaker system will make sports fans feel like they’re in the stadium and can also remove the commentators from the broadcast.

The Sony N9100W, which will be released in Australia in the next month, is a 1000W 5.1ch home theatre speaker system that features an all-new Football Mode.

In this mode the ambient noises are piped through the surround speakers to make viewers feel like they are sitting in the sporting stadium watching a live game.

And to complete the illusion, it’s also possible to remove the commentators’ voicers from the soundtrack and still hear the cheers and sounds all around you.

This feature may come in handy for viewers who are not particularly interested in hearing from the commentary team but still want to watch the game.

Some viewers may prefer to have radio commentary in the background while they’re enjoying the match.

The speakers were actually tuned to recreate realistic stadium sounds after Sony engineers actually travelled to Brazil’s Morumbi Stadium, which has a capacity of 80,000, to record the acoustic characteristics of the venue.

The speakers are filled with magnetic fluid which allow for the removal of the dampeners and dramatically reduced the size of the speakers while still producing a detailed and rich sound.

The magnetic fluid was actually designed by the NASA space program for the Moon missions and was used to transport fuel around the spacecraft in zero gravity.

The affordable Sony N9100W Blu-ray home theatre speaker system is expected to be priced at around $1000 when it is released in Australia in the coming weeks.