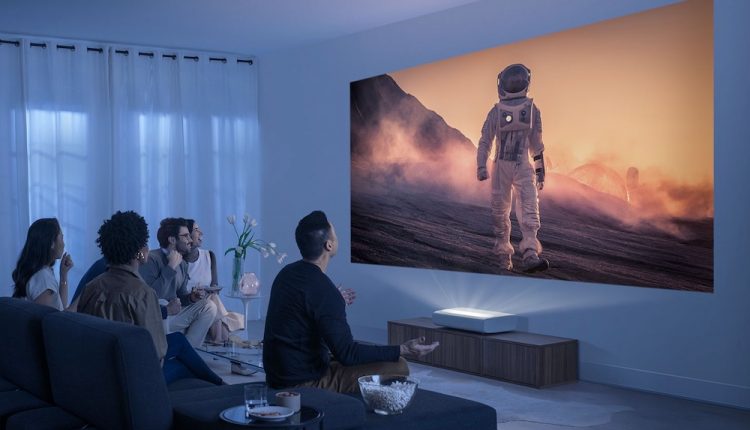 The Samsung Premiere is an excellent all-in-one solution that can provide a home cinema experience right out of the box with minimum fuss and easy set up that adds up to maximum enjoyment.

Setting up a home theatre can be intimidating for some people – they have to consider a projector, speakers, AV receivers and cables and someone to put it all together. But Samsung has come along with The Premiere and put all of those things into a single product.

Samsung, already the worldwide market leader in TVs, has poured its significant know-how into The Premiere LSP9T.

It’s a smart TV in the shape of a 4K short throw projector.

Instead of placing the TV on your entertainment unit, you position The Premiere in the same spot.

But unlike a regular TV, The Premiere can beam a 4K image up to 130-inch on a plain wall or a fixed screen.

And it only needs to sit as close as 11.3cm away from the wall.

Traditionally you’d need to mount the projector metres away from the screen to achieve a decent size image and then you’d have to snake a cable to your sources and AV receiver which is in turn connected to multiple speakers in the room.

That’s why enthusiasts and cinephiles with a fair amount of money to spare create a dedicated home theatre room – they want a cinema feel in their own home and they have the expertise and the money to achieve it.

And the results are usually spectacular – as you would expect for they price they paid getting their system together.

Nothing wrong with that. 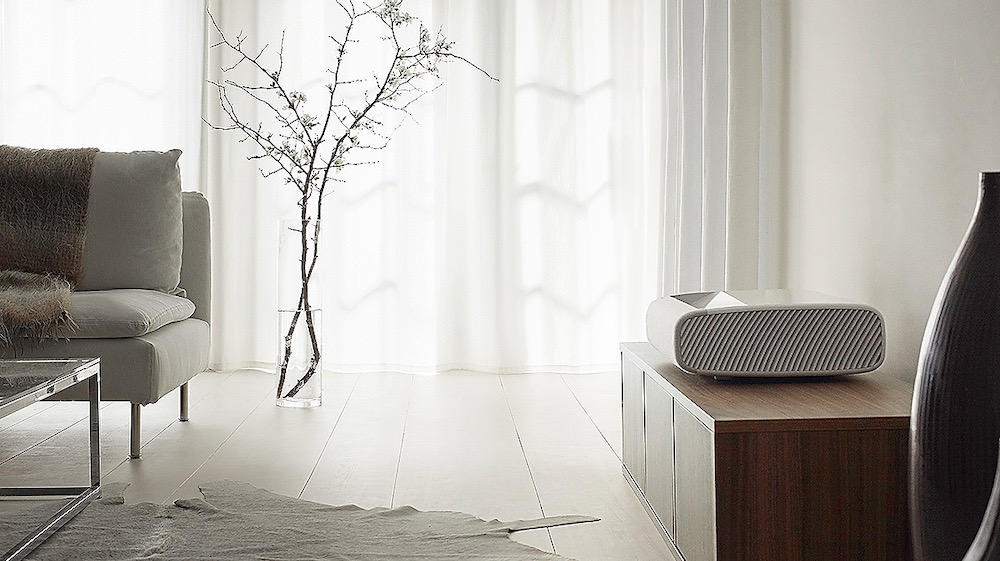 But what if you want something bigger than the largest TV but don’t want to spend tens of thousands of dollars in the process.

Samsung’s Premiere has everything in one unit which measure 55cm wide, 36.7cm long and 14.1cm high – which is relatively small considering what it can do.

And it’s not an ugly box either. It’s actually a stylish unit with a textile wrap on the front so it gives it softer look that blends into your home’s décor.

For our review we set up The Premiere on an entertainment unit in our theatre and aimed it at our fixed screen. 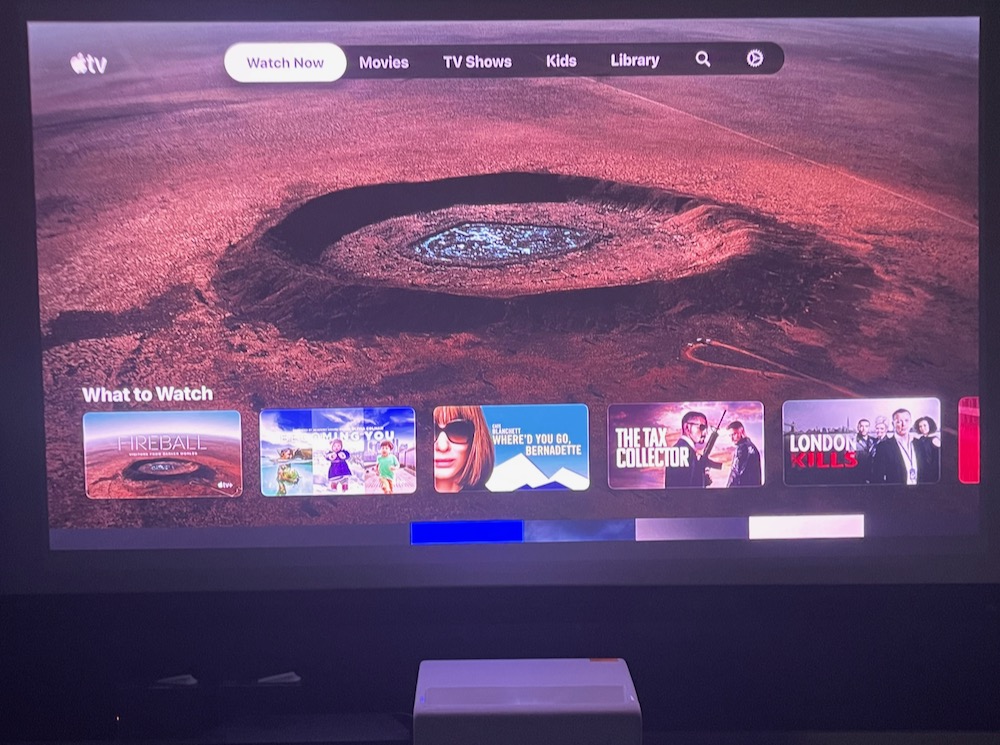 We also aimed at a plain light-coloured wall in our home as well.

Slightly better quality on the screen, which has a special layer to boost brightness, but the wall was not far behind in terms of brightness – but it had no effect on the 4K clarity which was still there. 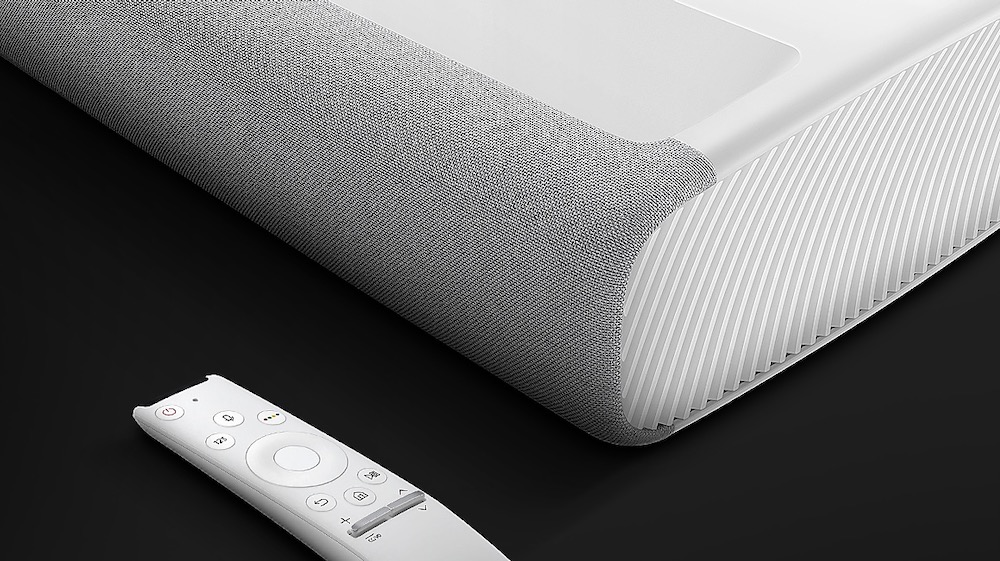 So in one box you’ve got the projector as well as the speakers – 40W 4.2 output which includes a subwoofer – and all the inputs to connect your sources.

And did we mention it’s a smart TV as well so you connect your antenna cable and tune your channels like a regular TV.

We should point out that a regular 4K projector has no speakers, no built-in TV tuner and no speakers.

For that you’d need a separate TV set-top box, a receiver and speakers to connect to it.

But Samsung’s brings everything into The Premiere – and the result is spectacular.

Set up takes minutes – simply place it on your entertainment unit, plug in the power cord and turn it on.

The first thing you have to do is line up the image which is easier than it sounds. 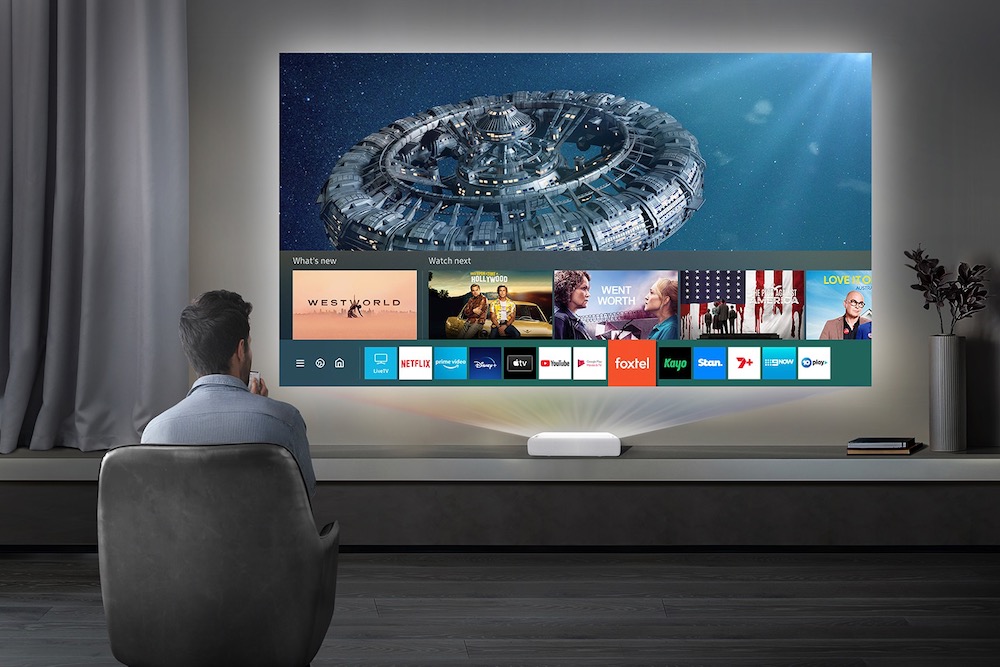 Because the triple laser projector built-into the unit is so close to the screen you need to carefully position it because any adjustment at this short distance can make a big difference.

Once we were happy with throw distance we than had to make sure we were parallel to the wall.

From here you can go into the settings and make more finer adjustments and stretch the image in the corners to make the image straight on all edges.

We found that adjusting the leg height closest to the viewers helped get the image at the right height on the wall.

And the good news is you only have to do this once – as long as you don’t move The Premiere. 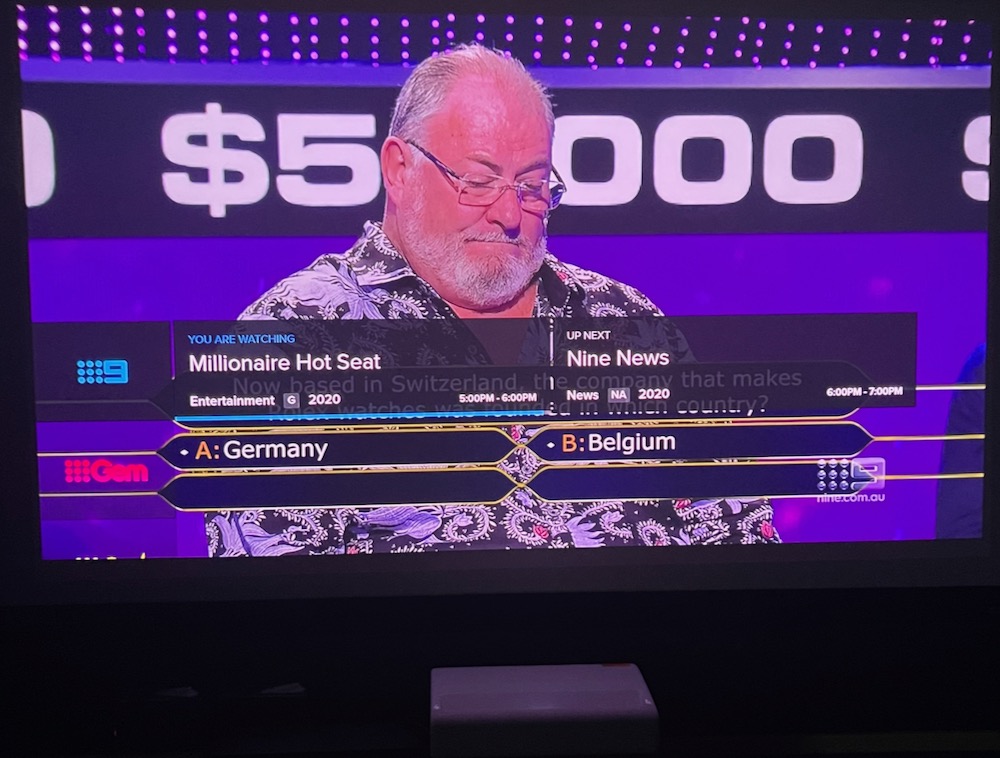 The triple laser projector has a brightness of 2800 ANSI lumens which is bright enough to watch even during the day.

Unless your room is really brightly lit during the day, you’ll be able to enjoy a clear image but it will look a little washed out.

At night and in a darker room, the image quality is stunning – sharp and clear 4K and at a size many people aren’t used to seeing in their home.

When we set up The Premiere in our home theatre, the image was still clear with all the lights on.

Our only criticism is some slight blurring and rainbowing in the top corners but if we didn’t point it out you probably wouldn’t notice it. 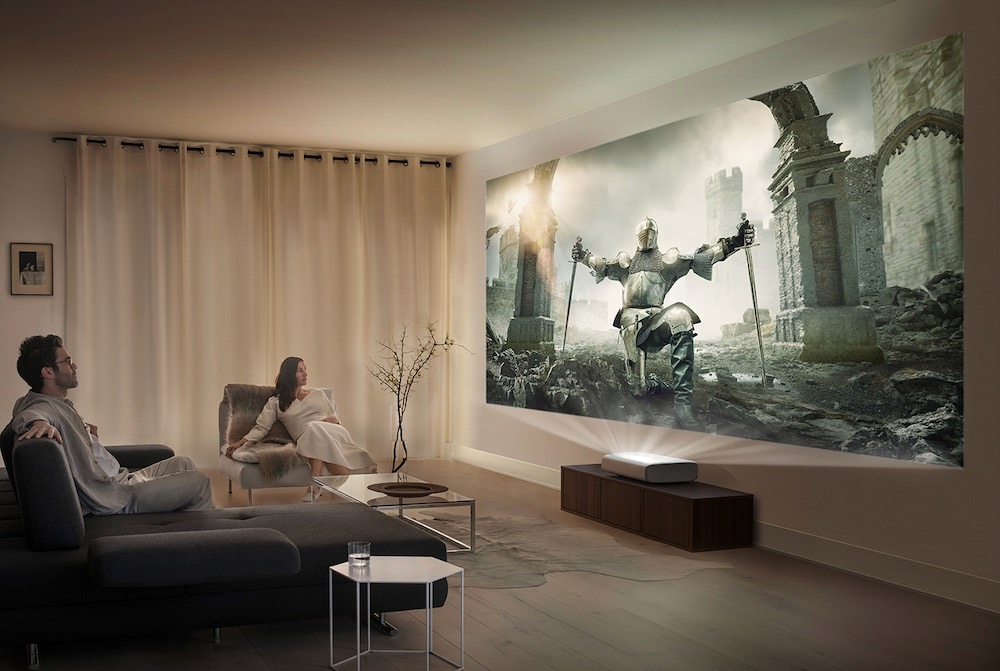 Connecting your sources are just as easy as it is on a regular smart TV – there are HDMI ports on the back as well as an Ethernet port to connect to the internet. But there’s also wi-fi onboard as well.

There are three HDMI ports, one USB, digital audio out (optical) and an antenna connection so you can hook it up to watch free to air TV.

And, being a smart TV, you can also access all of the streaming services like Netflix, Stan, Disney+, Apple TV+, Prime Video and many more.

Not only does the Premiere look good – it sounds good as well with the front firing speakers providing a handy 4.2 output which is good for a smaller room.

In a larger room that sound loses its punch. It was a little lacking in the bass department but that’s understandable without a standalone subwoofer. 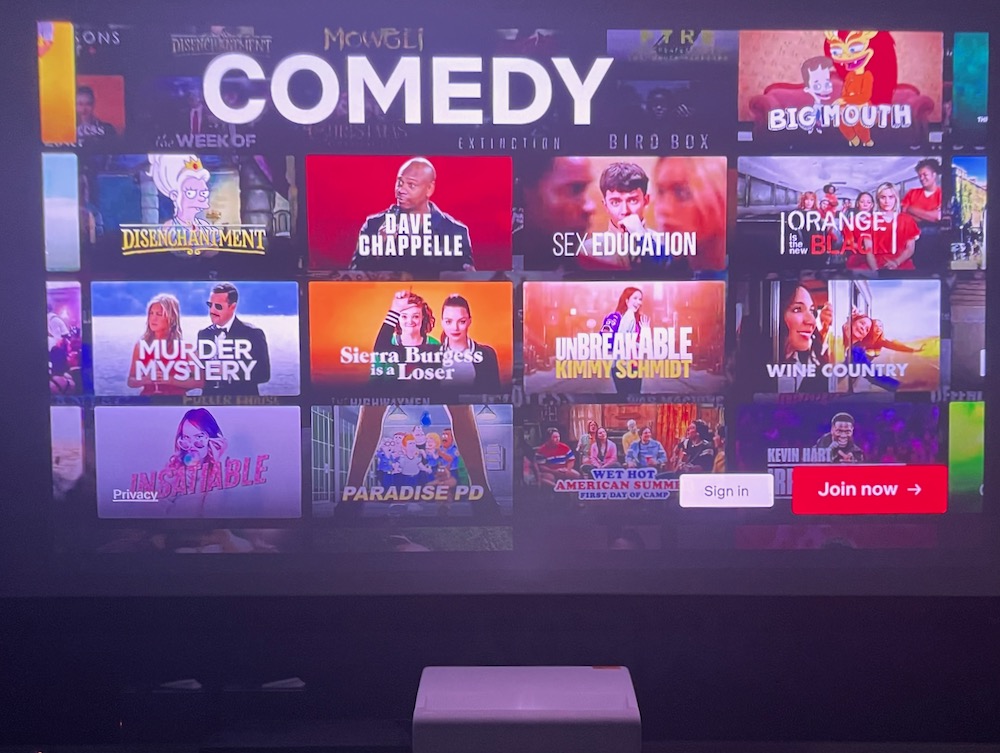 Now let’s talk about the price. The Samsung Premiere LSP9T is $10,999 which, when you consider what you get, is quite reasonable.

High-end 4K projectors are more than $10,000 and that’s before you add speakers and a receiver so you’re looking at a far higher bill than $10,999.

The Samsung Premiere can give you a 130-inch 4K picture so the cost per square inch is actually decent value.

The Samsung Premiere is an excellent all-in-one solution that can provide a home cinema experience right out of the box with minimum fuss and easy set up that adds up to maximum enjoyment.

Investing in Bitcoin – What You Should Know