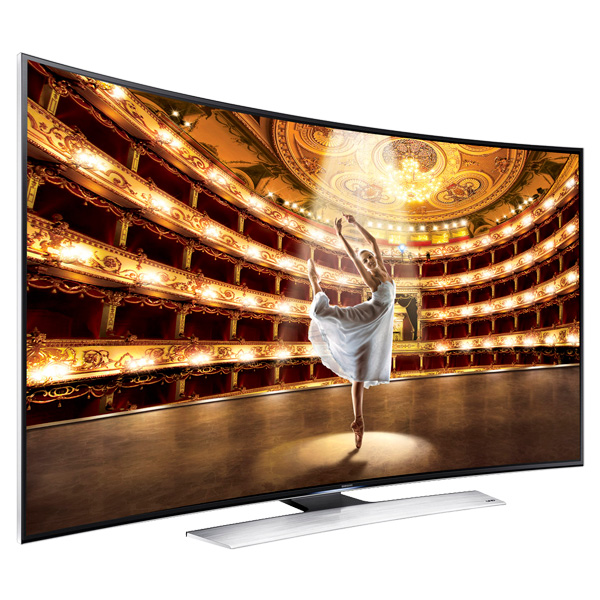 The fact that the curved screens have been positioned as the heroes of its new TV range means Samsung is banking on the fact that its curved TV will appeal to customers.

And with its great design, ultra high definition resolution and smart TV convenience and connectivity there’s a lot to love.

Well obviously the fact the large screen on the HU9000 has a distinct curve in it will be the most noticeable feature of the TV.

The curve is subtle and elegant and the motivation behind it is to offer a more immersive experience.

And it achieves that thanks to not only the curve but also some onboard technology that draws the viewer even further into the picture.

Around the UHD screen is a barely-there bezel so there’s hardly anything to distract you from the amazing picture.

The Samsung TV’s stand is also curved and follows the line off the screen to make it look like it’s floating in mid-air.

The back of the TV is surprisingly sparse because the inputs have been relocated to a separate UHD One Connect Box.

On the One Connect box are four HDMI ports, a USB 2.0 and USB 3.0 port, Ethernet port and an audio port. And connects to the TV with a single HDMI cable.

This One Connect box is also essentially the TV’s Evolution Kit as well.

Samsung’s Evolution Kits allow TVs in its range to be upgraded with the latest processor, software and remote control and are usually located on the TV’s rear panel.

With the curved shape of the HU9000, it wasn’t practical to have One Connect box embedded into the TV.

Having it as a separate box actually makes it easier to access your inputs and also easier to replace if you wanted to update the TV in the years ahead.

This way users not only get the latest processor, software and remote but also the latest inputs as well to make the Samsung Curved TV truly future proof.

Under the hood is a quad core processor to power the panel and ensure a smooth picture and fast operation.

One of the main things customers look for is, of course, picture quality and the good news is the HU9000 delivers big time.

The TV has Ultra High Definition resolution which is four times the resolution of full high definition so clarity was obvious as soon as we turned the TV on.

Samsung already knows the formula to producing excellent picture quality and they have improved on that with the HU9000.

The colours looked real and natural without any oversaturation or washed out hues. It was just right.

Black levels were also better than average and there was plenty of detail which was clear in dark scenes.

This is all courtesy of the Samsung PurColour technology that works behind the scenes to get the mix just right.

We were able to watch native UHD content on the TV and we were stunned by the sharpness and clarity. Even standing a few inches away from the TV we still couldn’t see any pixels.

And now while there’s not much UHD content around right now, the TV can take your existing content and ramp it up to UHD (also know as 4K) quality.

We were watching old episodes of Seinfeld – filmed in the 90s – on a HD channel and it has never looked better.

When playing Blu-ray Discs there was also a distinct jump in quality.

We played The Empire Strikes Back – a movie we know very well – on Blu-ray and we were mesmerised with the detail and colours.

But the TV offers more than just a pretty picture. It also offers more depth with the Auto Depth Enhancer.

This is an algorithm which examines every frame and, in real time, creates a foreground, mid and background to the image.

And we’re not talking gimmicky 3D here where things are supposed to leap out from the screen. In fact, it’s the opposite where you can look further into the picture like looking out a window instead of a flat picture.

We did do a side-by-side comparison of Samsung’s curved UHD TV with Auto Depth Enhancer next to a Samsung flat UHD TV without it and there was a clearly noticeable difference between the two.

The curved shape of the screen also plays a big part and is just one more ingredient into making the whole experience even more immersive.

Another thing the curved shape of the Samsung TV improves is the viewing angle so even if you’re sitting right off to the side you’ll still have a clear view of the screen.

It can also be accessed and controlled through the Smart Hub which is like the Mission Control of the TV.

It offers quick and intuitive access to what’s on TV right now on every free-to-air channel and what’s coming up.

For current shows it even shows a progress bar to indicate how much of the show you’ve already missed. A very handy feature for channel surfers.

But it’s a lot more than just a glorified EPG (electronic program guide). It can also help find information about what you’re watching.

While we were watching Seinfeld we split the screen and fired up a browser on the other half and it automatically did a Google search for Seinfeld with the results displayed on the screen.

The Smart Hub is also where you can access content, social media and catch-up TV apps as well as enjoy the music, pictures, and movies from your compatible mobile devices on the screen.

Users can also access a number of games that can be played on the Samsung TV without the need for a console or an extra controller.

Multi-Link is a standout new feature and allows the viewers to split the screen in up to four parts to view multiple channels, a connected source or an app or social media feed.

And even when split in quarters, each section is still in full high definition.

And the Smart Hub can be controlled with your voice or motion gestures – which have both improved significantly even over last year’s model.

Gesture control was a lot more responsive and as fast an option as just picking up the remote. Likewise for voice control – Samsung has made a good feature even better and more accurate.

Speaking of control, there is a small football shaped secondary controller to offer an easy way to navigate the TV and the Smart Hub.

You can either use the directional buttons or pilot the on-screen pointer to choose what you want to select the same way you’d do with your mouse on your computer.

With the World Cup just around the corner there’s a handy Soccer Mode which can listen out for increased sound pitches from the crowd and the commentators and package these sections so you can go back and take a look at them later.

With the World Cup games scheduled to be played in the middle of the night Australian time this is a feature that will get plenty of mileage.

One of the only marks against the TV we found was the sound quality from the built in speakers.

While the lion’s share of Samsung’s attention has gone into coming up with the best picture quality, the smarts and the connectivity, it seems like the sound quality was an afterthought.

Samsung had a real opportunity to compliment remarkable picture quality with stunning sound quality and truly knock it out of the park.

It’s not a deal breaker but definitely something we would have liked to see – and hear.

Now some might see those prices as high but when you look at what you get for money – UHD resolution, a stunning curved design, smart features, connectivity, content and a future-proof One-Connect box – it’s fairly reasonable.

Samsung’s new curved Ultra High Definition LED smart TV is a head-turner in every sense of the word.

Apart from its stunning design it also has a picture quality that’s right up there with the best and a host of other smart intuitive features to go with it.

The future of TV viewing has arrived.

Kobo comes to the rescue for Sony Reader customers