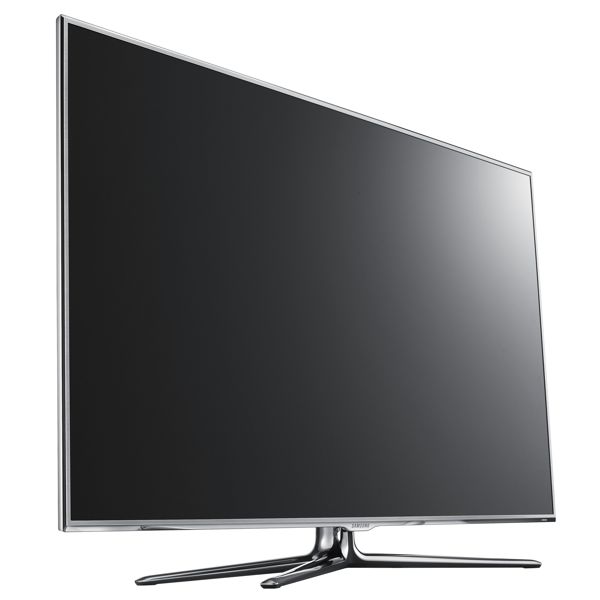 If you’re in the market for a television with brains and looks then take a look at Samsung’s Series 8 LED Smart TV.

The 55-inch flatscreen features a virtually borderless screen that presents the viewer with nothing but the full high definition image on the excellent screen.

And not only is the frame thinner than a pencil at 5mm, the thickness of the screen itself is a wafer-thin 29.7mm.

With built-in wi-fi the Samsung Series 8 (UA55D8000) 55-inch LED Smart TV is a gateway to content, apps and the internet.

The Samsung 55-inch Series LED is a real head-turner and, when compared to a regular television, is head and shoulders above the opposition.

The 5mm frame almost blends into the background so the viewer has nothing to distract them from what’s showing on the screen.

For viewing on a lowboy, the Samsung comes with a silver four-pronged stand but the best place a TV like this is one your wall. Being so thin and light, the Samsung 55-inch LED TV is as easy to hang on the wall like a painting.

The full high definition screen’s superb picture quality is the result of proprietary technology including Micro-Dimming to enhance contrast and Ultra Clear Panel to eliminate reflection and preserve natural colours.

Also on board is Wide Colour Enhancer Plus for vivid colour and increased detail, 3D HyperReal Engine for life-like pictures and Digital Noise Filter to reduce digital artifacts and “noise”.

A built-in brightness sensor can also adjust the screen to the right brightness after measuring the intensity of the light in the room.

Fast motion on the screen, especially while watching sports, produced virtually no motion judder thanks to Clear Motion Rate technology that measures motion scene by scene to maintain clarity.

The Samsung 55-inch Series 8 LED is also a 3D TV so can handle 3D broadcasts and 3D Blu-ray which is easy to view in full high definition with the included slimmer and lighter 3D active shutter glasses.

And there’s also a 2D to 3D converter so you can watch all your favourite content or channels and turn it onto 3D in real time at the press of a button.

The 2D to 3D conversion added some layers of depth to the picture and, while easily noticeable, it was not as good as native 3D content.

TV is no longer an idiot box – in fact it can now be one of the most intelligent products you can own after your computer and smartphone.

With the Samsung 55-inch Series LED Smart TV it is your gateway to a whole new world of possibilities. The built-in wi-fi also makes it easier to connect if there is no cable nearby.

It is also the portal for Samsung Apps which, like the ones on your smartphone, will work fullscreen on the Series 8 LED TV. And users can choose from a number of categories including games, health, education and social networking.

Speaking of social networking there are apps for Twitter and Facebook so you can keep track of all your friends from the comfort of your couch.

Now tweeting during your favourite show can be done right there on the screen in comfort.

The TV’s remote has two sides – one like a regular remote with keypad and the other with a full qwerty keyboard for easier typing.

There’s also a web browser so you can check out your favourite websites in all their glory like never before. Seeing webites on a 55-inch is an entirely different experience to viewing on your computer.

And the TV can handle flash to the sites look as you’d expect, only a lot bigger.

It’s also easy to share content from other devices around the house which are on the same network as the TV like computers, tablets, smartphones and gaming consoles.

The recommended retail price of $4,699 is a little high but shopping around might uncover a slightly better price.

But, either way, users will get quality across the board for their money and a TV they will spend years enjoying and appreciating.