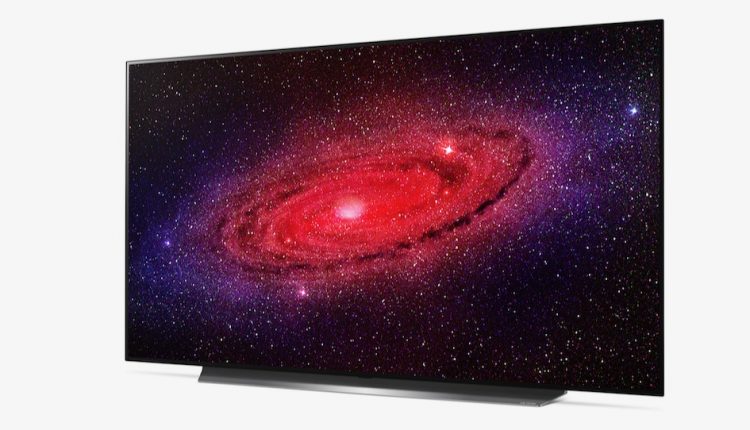 The new LG CX OLED TV has made a great product even better with intelligent new features that can take our home viewing experience to the next level. If you love movies, sports and gaming, the LG CX OLED TV will serve you well now and well into the future.

LG has demonstrated once again that OLED is the format to beat with its new 2020 range including the 65-inch CX OLED that has just been released and what we have just reviewed.

There have been some remarkable improvements in the new LG OLEDs which take an already stunning experience and makes it even better.

What sets OLED apart is the fact that it has self-lit pixels. OLED stands for organic light emitting diode – and uses a material that self illuminates which means there is no need for a backlight like a regular LED TV.

The advantage here is that every pixel can be either on or off and create its own dimming zone for better black levels and contrast.

Even the very latest back lit LED TVs have 200 dimming zones but when talking about a 4K TV you’re dealing with more than 8 million pixels.

So basically an LED TV with 200 dimming zones to lighten and darken the screen depending on the scene.

Now compare that to an OLED TV where basically each of the 8 million plus self-lit pixels are their own dimming zones so you get deeper inkier blacks and unparalleled contrast.

Never was this better demonstrated than when we naturally watched a few Star Wars films on the LG 65-inch CX OLED TV. 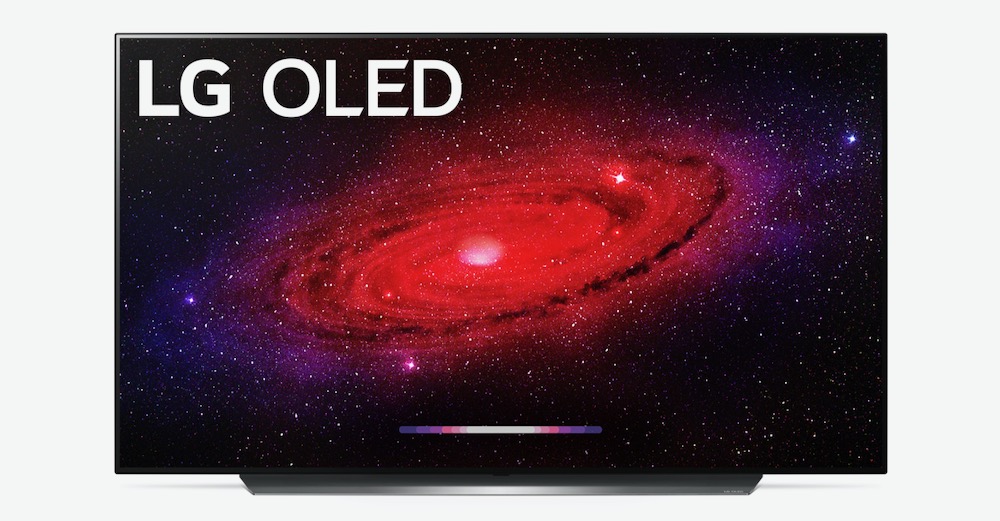 The star fields were remarkably defined – in fact it was so good you could see every single star’s point of light no matter how small it was – a detail that is lost with a backlit LED TV.

On the design side, the LG CX OLED TV still offers that impossibly thin design (another advantage of not having a backlight) that’s the same thickness as a $2 coin.

But be really careful setting the TV up – the top half of the screen is super thin so it needs to be handled with care. Set up is definitely a two-person job. 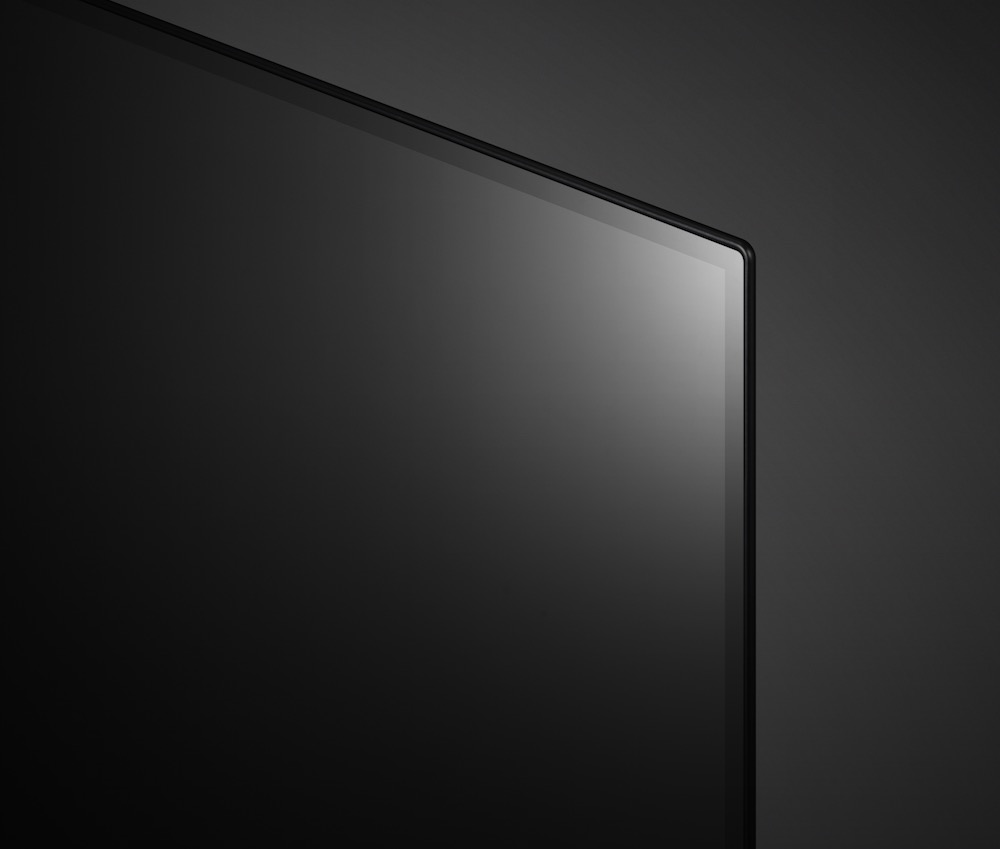 The LG CX OLED can also be mounted on the wall.

While the OLED screen technology hasn’t changed much – what has changed is how the TV’s new Alpha 9 Gen 3 AI processor handles things.

We easily noticed the improvements to picture and sound quality with the Artificial Intelligence doing the heavy lifting whether you like movies, sports or games.

Let’s start with movies and the new filmmaker mode which gives the viewer the choice of seeing the film exactly as the director intended.

Today’s TVs, including this LG TV, employs various motion smoothing and colour and contrast control to remove flaws from the source material.

But to a director this is as bearable as fingernails down a blackboard because the TV is basically photoshoppng their vision and taking out the true cinematic elements out of the film.

Most people won’t even realise this has been happening. But movies as an artform, especially those shot on film, include the flaws of the medium like motion judder and a frame rate of 24 frames per second.

We saw this on recent releases like Ford V Ferrari where some of the motion judder – which normally have been smoothed out like sandpaper in a rough piece of wood – was left in. Some people just like rough wood.

Dolby Vision IQ is also onboard as a more advanced version of HDR as well as Dolby Atmos so you’re also well looked after on the audio side as well. 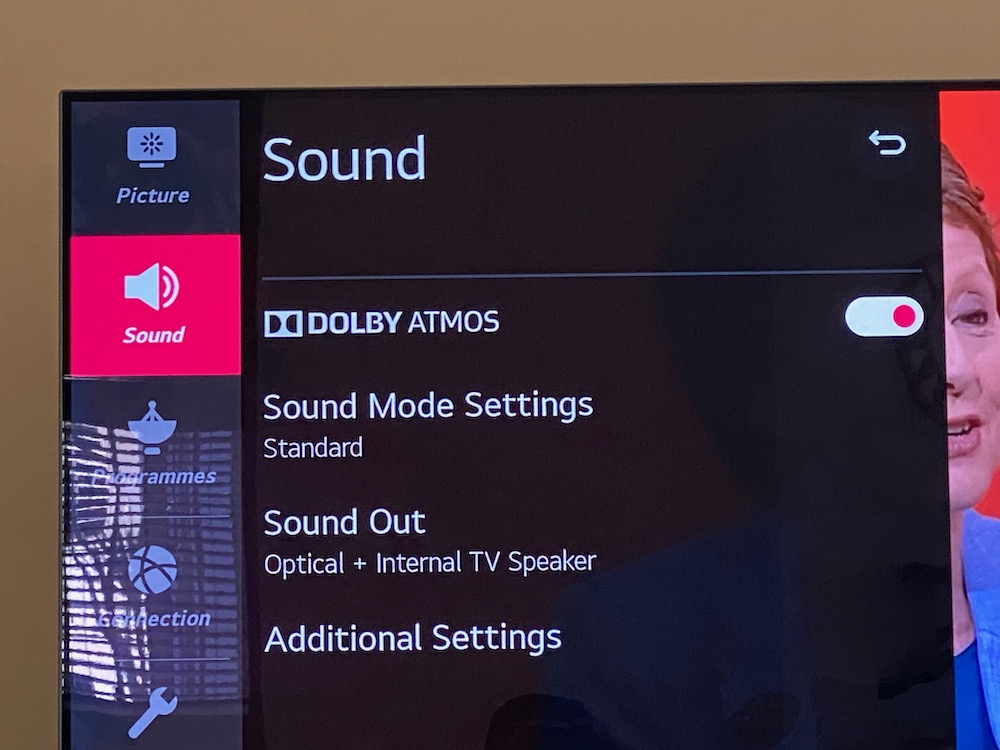 The recently released 4K disc versions of the Star Wars films dramatically showcased this feature with sound appearing to be coming from above and dropping down on the viewer.

The Death Star attack at the end of the original Star Wars film was a great example of the added audio you can get from Dolby Atmos with the LG CX OLED TV.

Naturally movies look amazing on the LG TV but sports lovers are also taken care of. 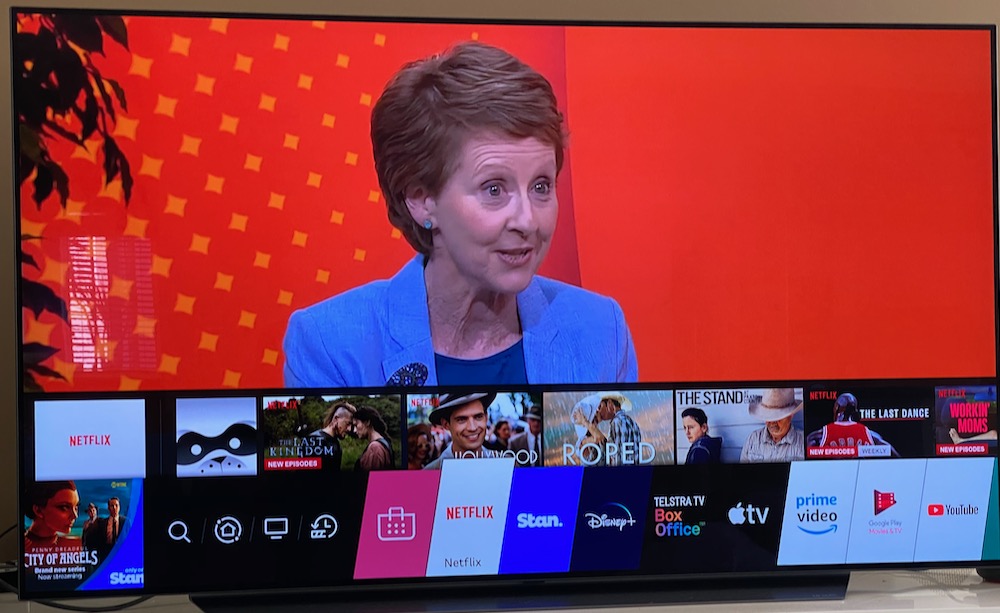 While we didn’t watch much live sport, there were plenty of replays to watch – for us the 2014 NRL Grand Final has had a few views.

Another new feature powered by the Alpha 9 Gen 3 processor is Auto Genre Selection that can detect the genre – in this case it’s sport and the image is optimised to improve the colour temperature and colour accuracy so grass actually looks like grass.

Auto Genre Selection also works with other genres like movies and animation and adjust the picture in real time to suit.

Gamers will also be in heaven with the LG OLED because it’s the first TV to offer NVIDIA G-SYNC compatibility which improves the game’s smoothness because the TV can match the frame rate of the attached console. 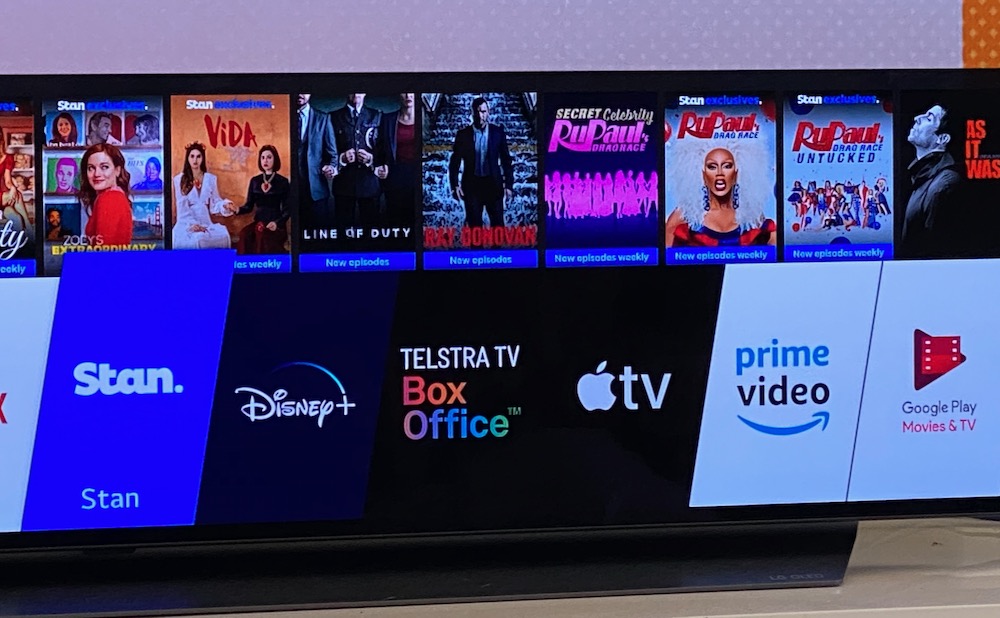 The TV’s new VRR (variable refresh rate) can eliminate frame tearing which looks like the image is streaky rather than smooth.

We spent plenty of time playing Call of Duty Modern Warfare which is a pretty fast paced game and the added smoothness and clarity was immediately obvious.

And with the latest games also including HDR (high dynamic range) the picture and contrast is even better and can make a real difference especially trying to spot your opponents in the darker areas of the game.

LG has also futureproofed the TV with HDMI 2.1 ports which will be able to handle next-gen gaming consoles like the PlayStation 5 and the new Xbox which run at up to 120fps and require lower input lag. 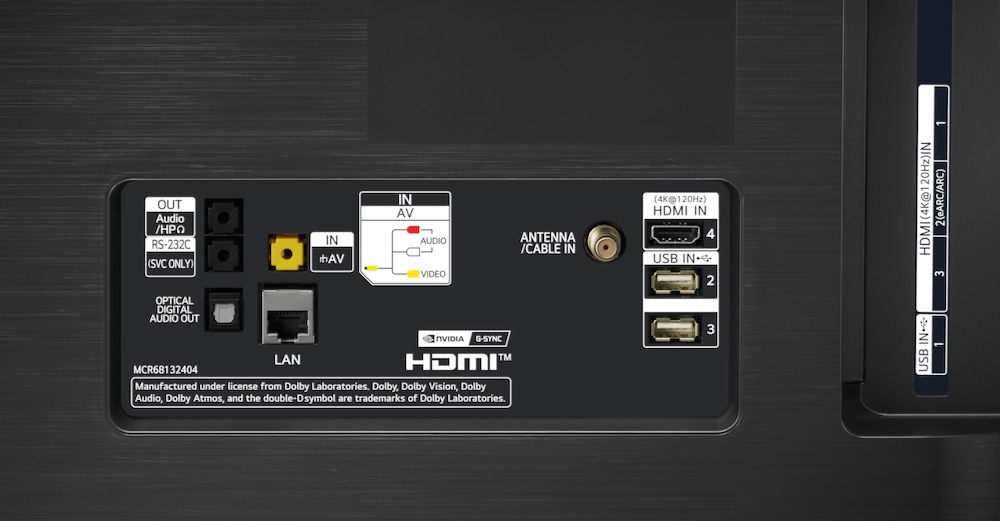 The LG CX OLED TV is also a gateway to content and streaming services including Netflix, Disney+, Apple TV+, Stan and Amazon Prime along with all the catch up TV services.

And when you hover the remote pointer over the tile of these streaming services you get an instant view of what’s popular or what you’ve been recently viewing.

And don’t worry if the app isn’t there, you can also use Apple AirPlay to watch apps like Kayo on the LG OLED TV or any other content from an Apple device. 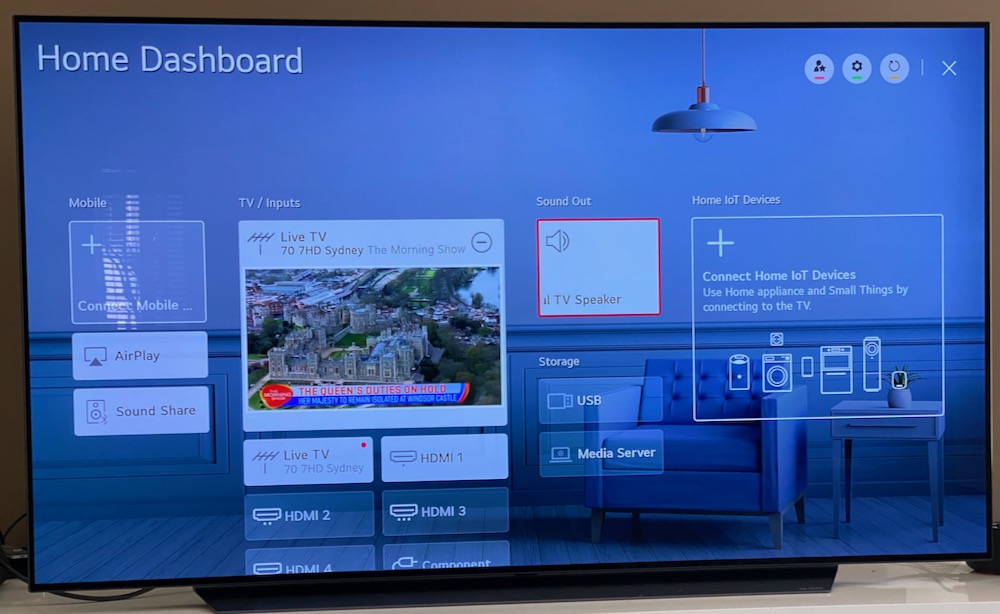 And being a connected device, the LG CX OLED TV can also be used as a dashboard to connect and control your smart home devices.

The LG 65-inch OLED TV we reviewed is priced at $5,399 which is a lot to pay for a new TV but you are paying for one of the most advanced and high quality TVs you can buy right now. But we’ve seen the TV’s price has already been reduced by retailers.

The LG CX OLED TV can be purchased from these retailers.

The new LG CX OLED TV has made a great product even better with intelligent new features that can take our home viewing experience to the next level. If you love movies, sports and gaming, the LG CX OLED TV will serve you well now and well into the future.