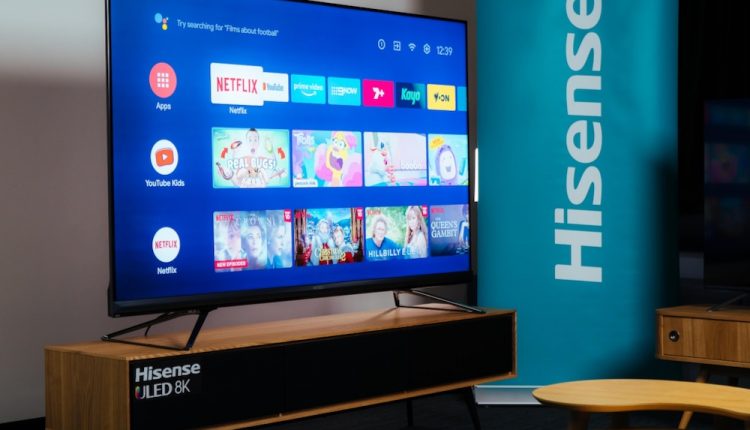 For its first 8K TV, Hisense has done an amazing job. The U80G 8K ULED TV is a brilliant first venture into 8K territory that demonstrates its technology can easily handle the jump to an even higher resolution. The result is simply stunning.

The first Hisense ULED 8K TV will be in stores soon and Tech Guide has had a chance to take a look at the 75-inch model which is packed with a number of features including AI to upscale content to 8K quality.

The 75-inch will be the first one available to customers this month at a competitive price of $6,999.

The Hisense 8K TVs are all 8K Ultra HD Certified.

Design-wise, the TV has narrow bezels and is sitting on two discreet silver legs so nothing will distract you from the excellent picture quality.

2021 is the year when the rubber hits the road for 8K content with an expected 8K broadcast of the Tokyo Olympics, 8K gaming and 8K streaming.

But even without all those things, an essential feature for any 8K TV – including this brand new Hisense ULED 8K TV – is good upscaling.

Because of the lack of 8K content the TV has to make use of those millions of extra pixels and flesh out HD and 4K content into something better – something approaching 8K quality. 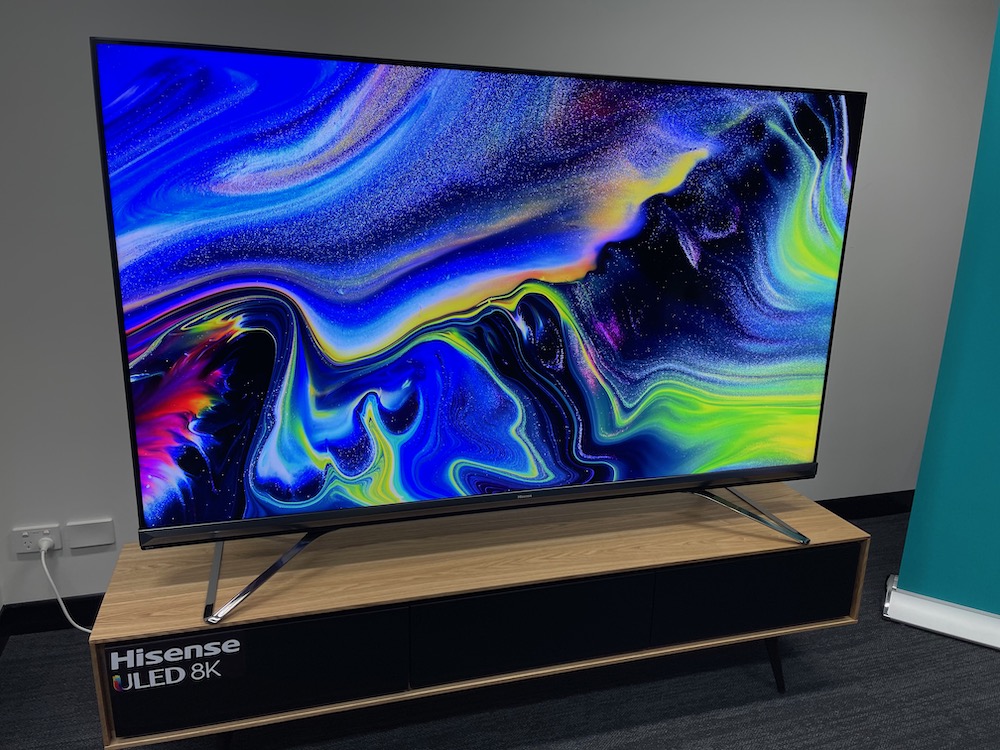 And the good news is the Hisense U80G ULED 8K TV does an impressive job in elevating the quality of what you’re watching into something better with its Hi-View Engine Pro technology.

We watched HD and 4K content on the Hisense 8K TV and easily noticed the improvement.

Naturally it’s easier to upscale 4K to 8K than it is to go from HD to 8K and we noticed the difference. 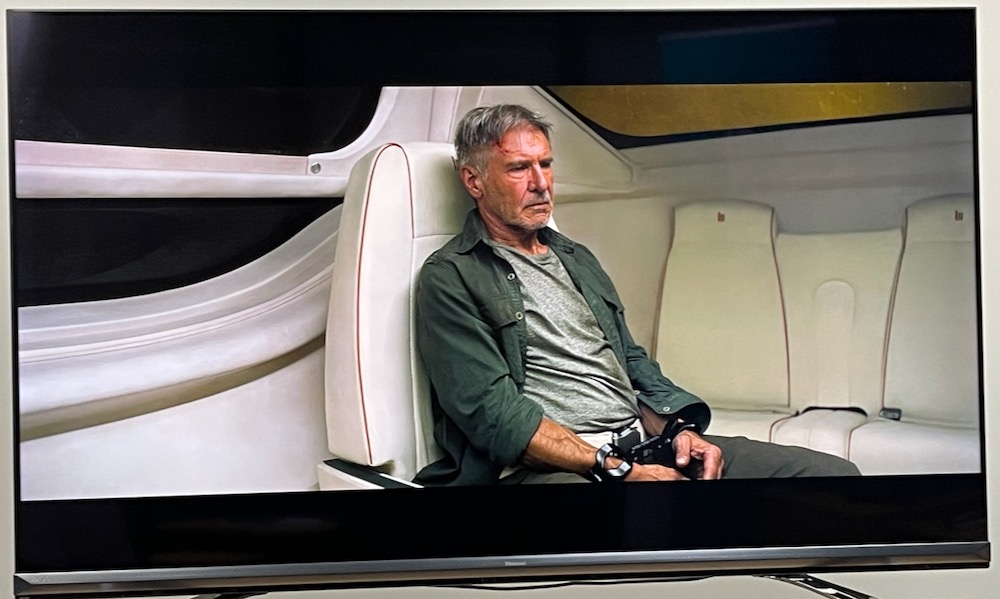 We watched two movies – Blade Runner 2049 in 4K and The Equalizer in HD and looked closely at the respective stars’ faces in close ups to see if we could see much of an improvement. 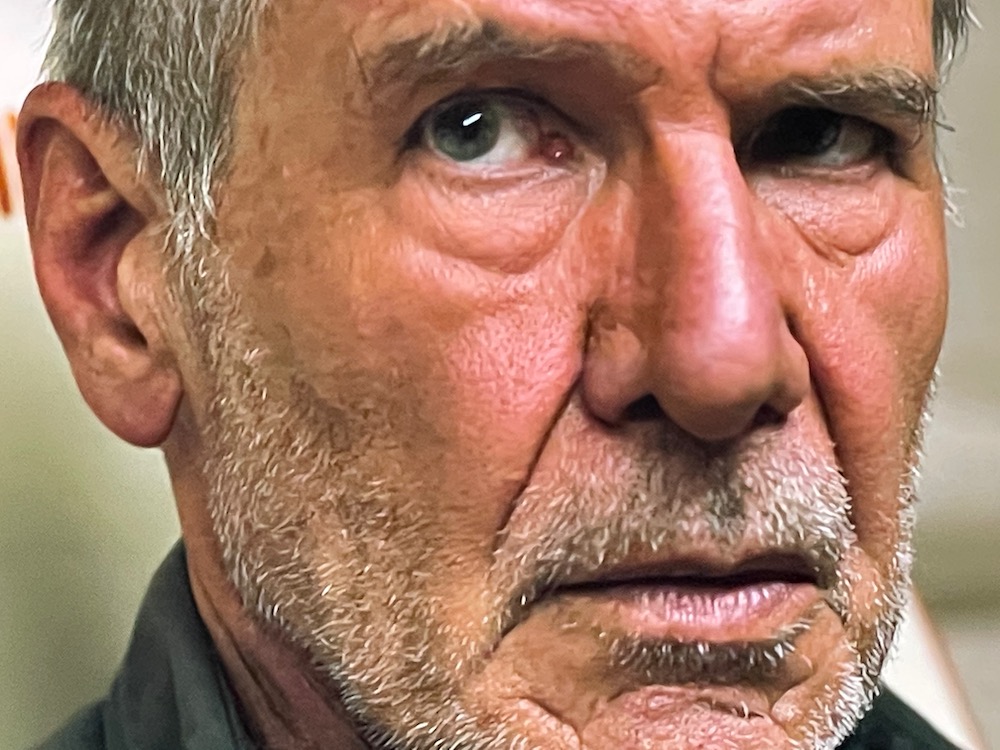 Harrison Ford in 4K was a lot sharper by far in Blade Runner 2049 in 4K on Netflix while Denzel Washington in The Equalizer in HD (also on Netflix) still looked better but was a little softer.

We also took a look at The Last Dance – the amazing documentary about Michael Jordan and the Chicago Bulls – also in 4K – and again the image quality was absolutely pristine. 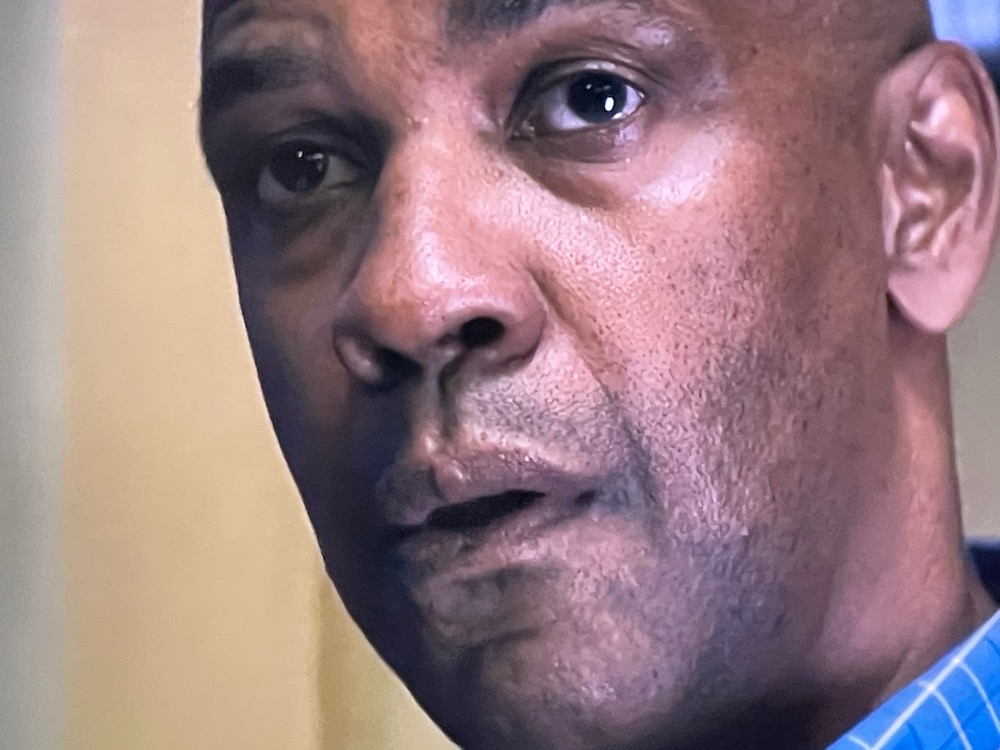 The Hisense AI upscaling examines the content and then applies the added pixels and where they are needed.

Basically the TV is recognising people, faces, objects, scenery and animals and intelligently adding pixels to round edges and smooth out objects.

But at the same time the Hisense TV’s other features are also coming on to play like Quantum Dot Colour, Full Array Local Dimming and Dolby Vision HDR so it’s still taking care of picture quality, black levels, colour accuracy and brightness. 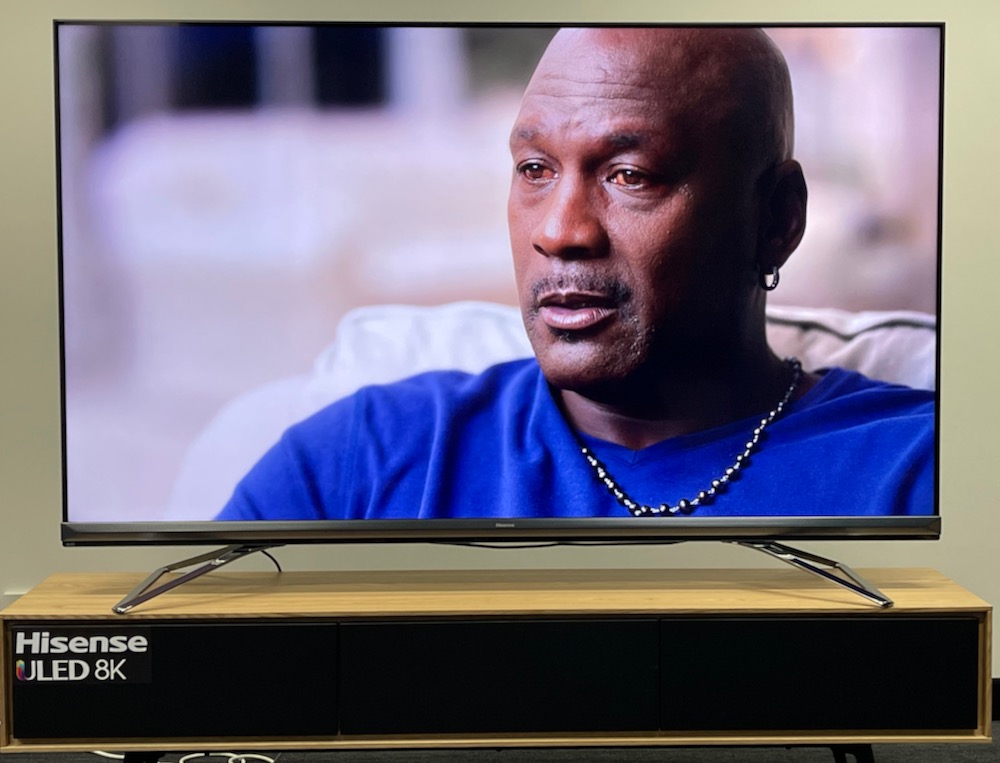 The result is a very satisfying picture that makes your content look amazing.

The TV has nailed the contrast with impressive black levels and plenty of detail within those darker areas of the screen.

In terms of colour, the image popped with rich and warm tones including hyper accurate skin tones as well.

Even watching a nature documentary we could see the intricate detail from a tortoise’s shell and colourful coral was also dazzling. 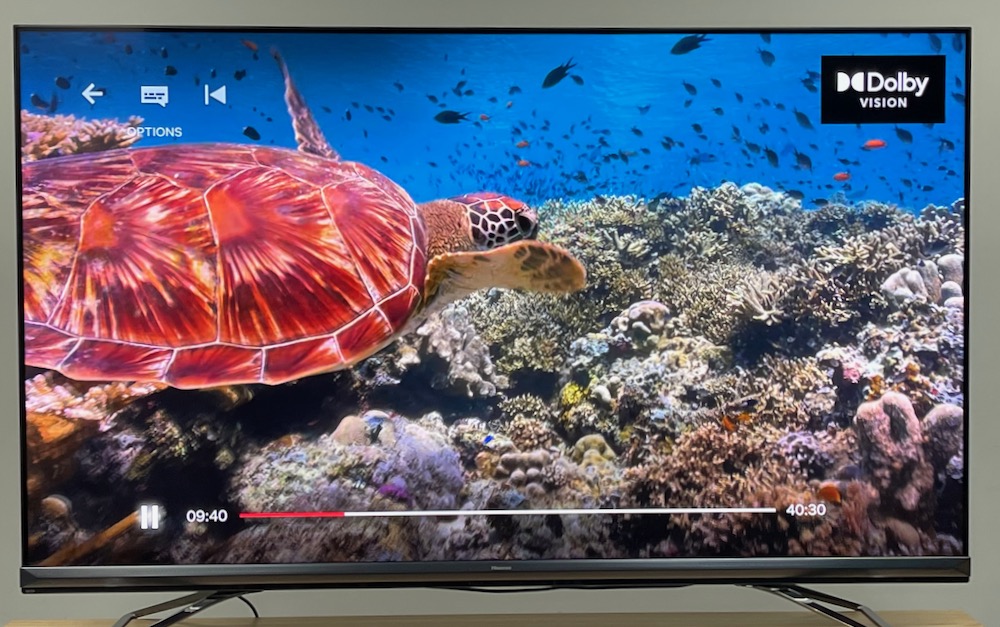 Even the sharks and the other fish had nice, rounded edges and were rendered smoothly.

And you have to remember the Hisense Hi-View Engine Pro AI upscaling also works for other content like gaming and live TV so even though there’s no native 8K content you’re still able enjoy a greater quality than you would normally be viewing in HD and 4K. 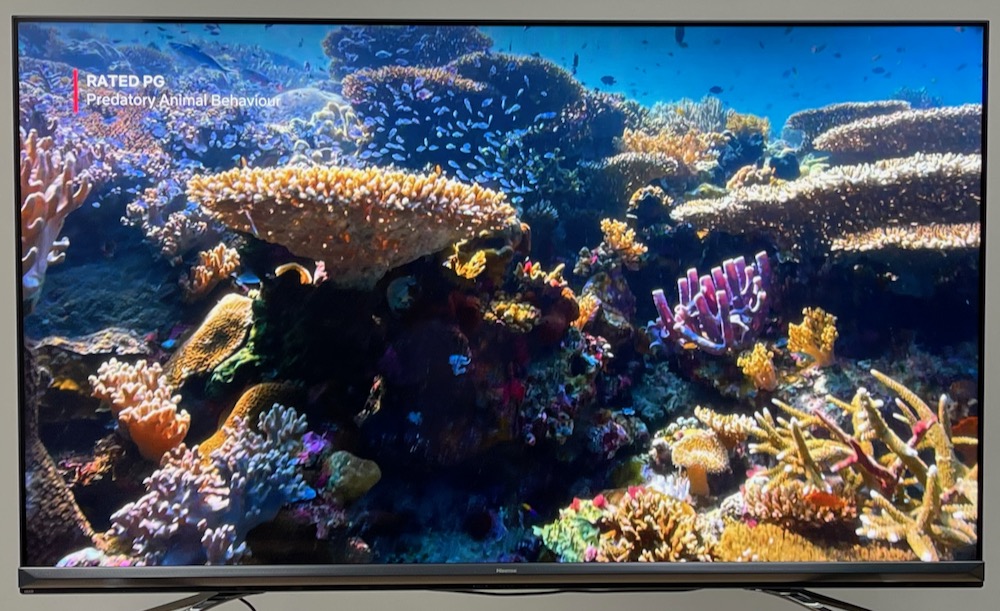 There is also a Game Mode Pro with VRR (variable refresh rate) and AMD FreeSync to reduce lag and stuttering during play.

It also has Auto Low Latency Mode (ALLM) for an even smoother gaming experience.

The viewing angle of the Hisense 8K TV is also quite impressive so even sitting off to the side you can still enjoy the brightness and picture quality in the same way as if you’re sitting directly in front of the screen. 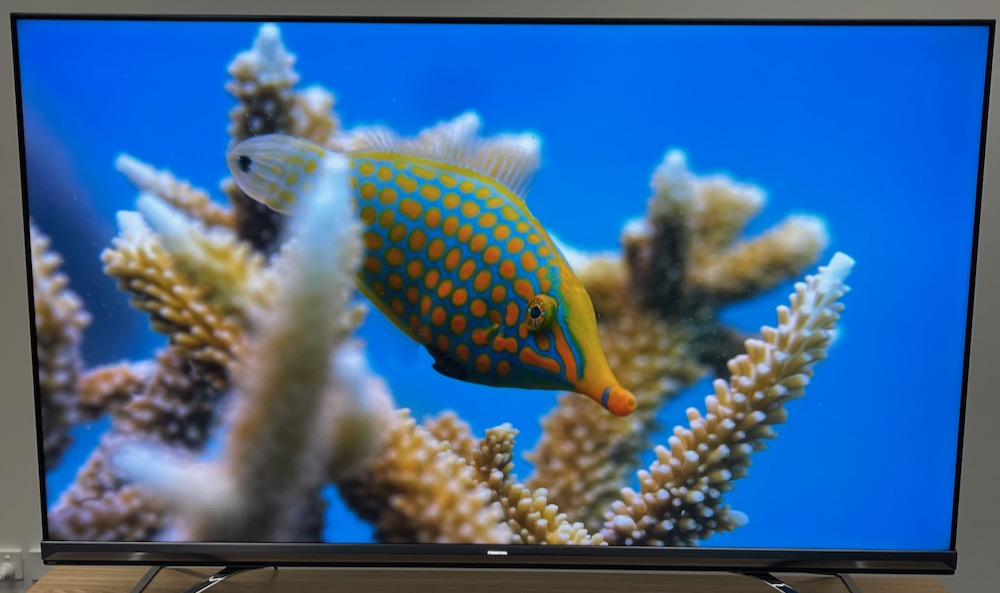 On the audio side the Hisense U80G 8K TV also has Dolby Atmos on board to create a decent sound to enhance the whole viewing experience.

The onboard speakers have a fair amount of power and were quite loud at full volume with nice definition virtually no distortion. 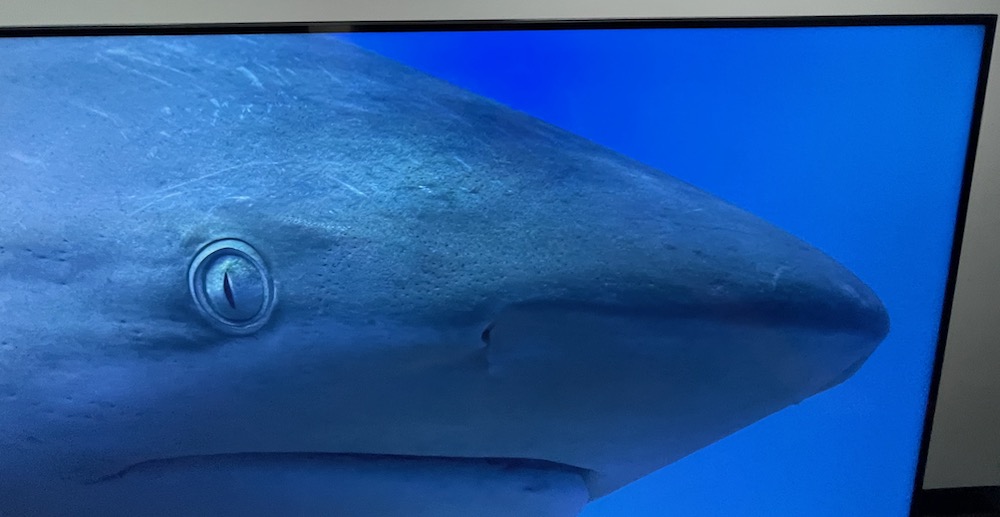 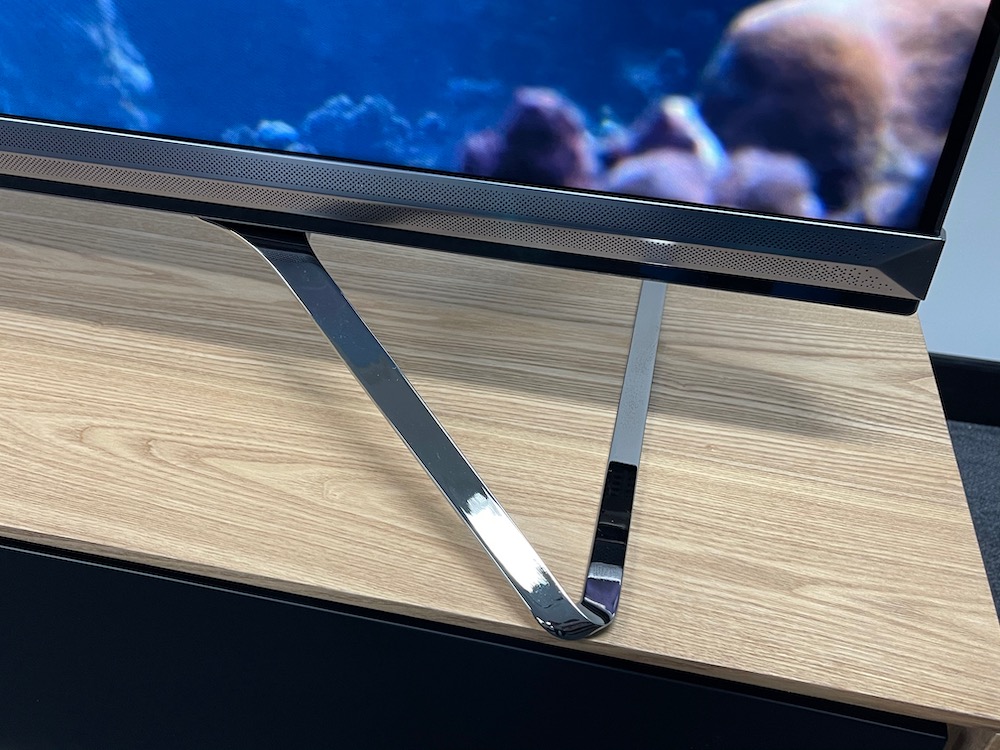 That’s not to say the audio from the TV isn’t decent quality – it works well on its own but it would be improved with a home theatre speaker system or soundbar. That would take it to another level.

Interestingly, the first range of 8K Hisense TVs are running the Android OS rather than the company’s very own VIDAA OS.

It gives the TV a stable platform as well as the ability to download and install any streaming app from the included Google Play Store rather than waiting for all of them to be built for VIDAA.

Our only complaint is that the Google OS isn’t as responsive as VIDAA and it’s also a little more clumsy to navigate. 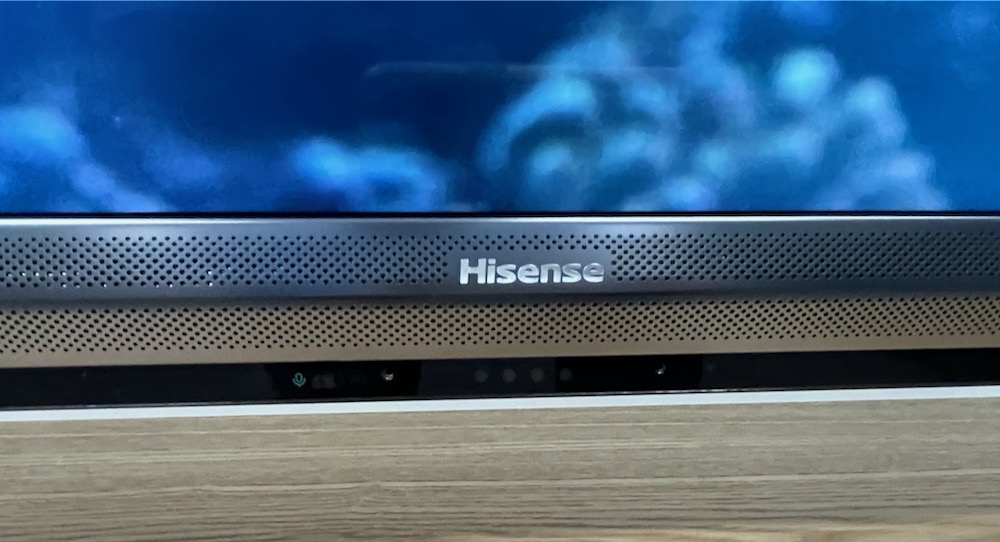 Google is also handy for voice control as well with Google Assistant just a voice command away.

And the far field microphones can pick up your voice from across the room so there’s no need to shout to get its attention.

There’s also Alexa onboard as well so users can control the TV hands-free without the need to hold down a microphone button on the remote. 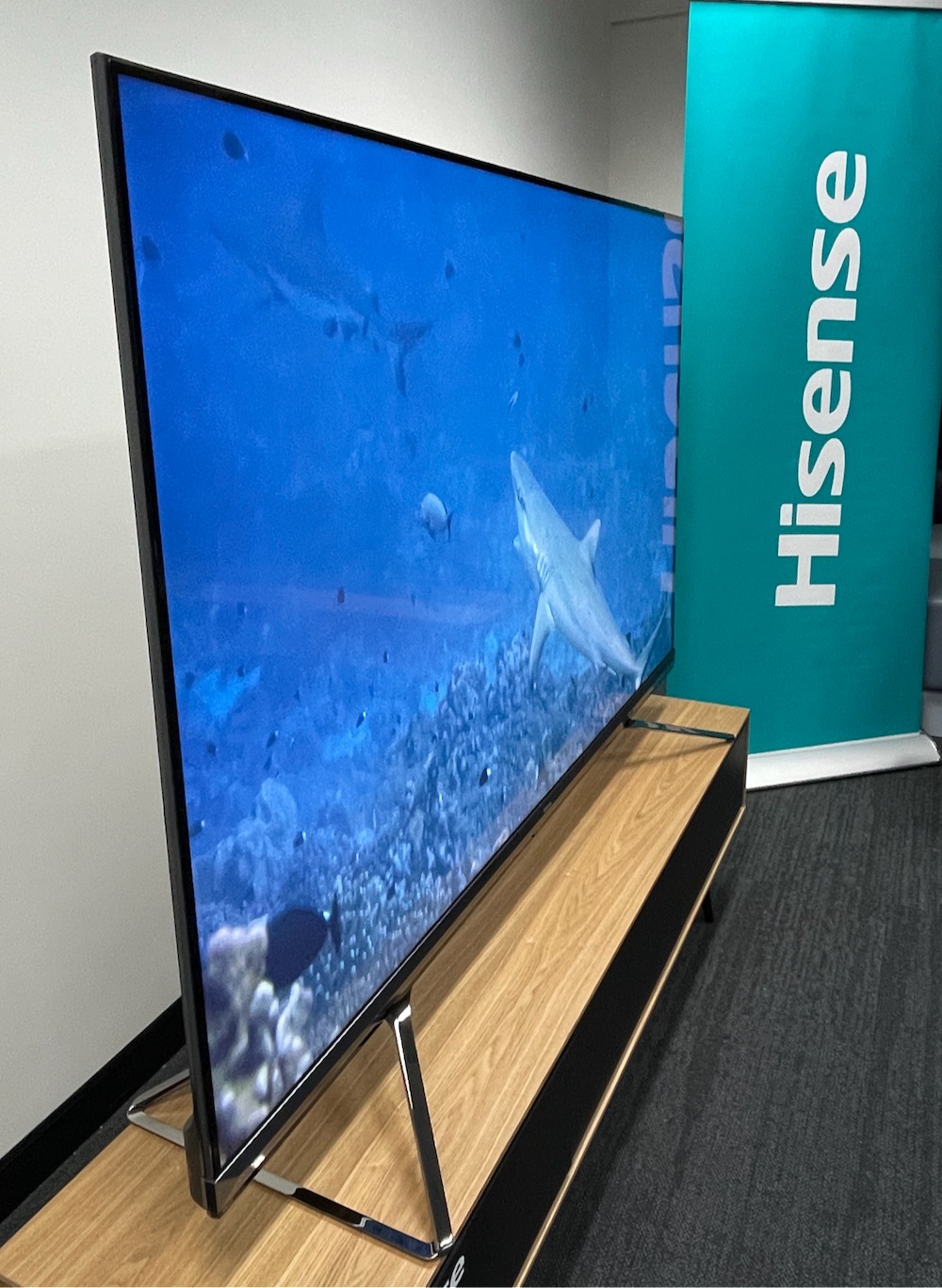 Hisense’s first offering with 8K is excellent and it has brought its already impressive ULED technology to an all-new level.

But perhaps one of the best features of the Hisense U80G 8K TV is the price. 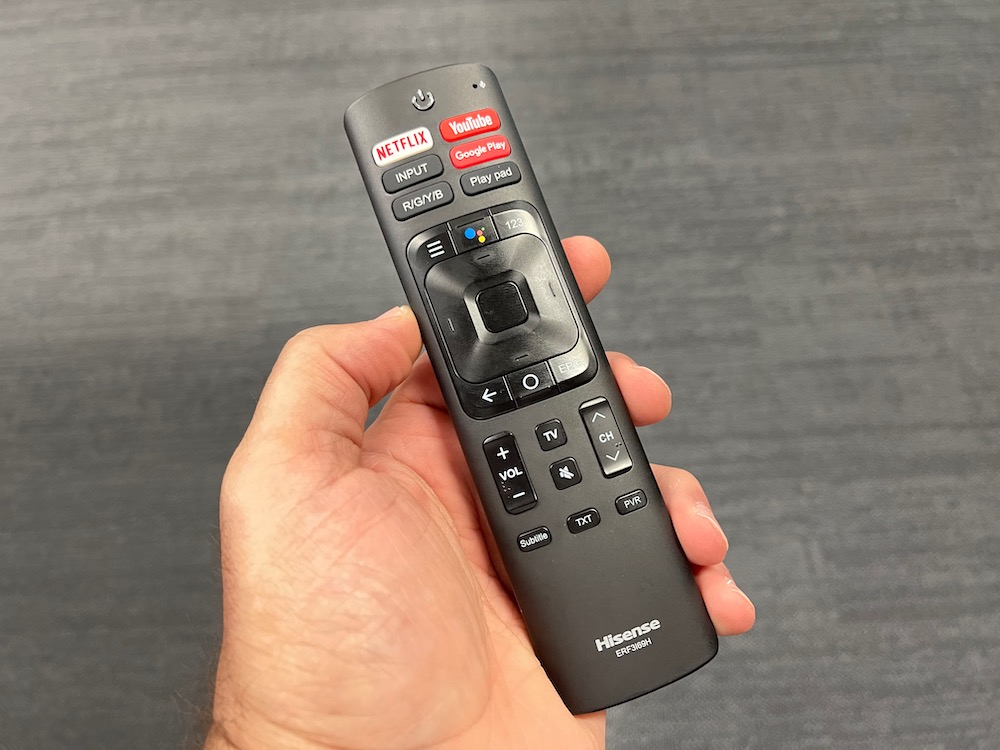 With this 8K TV, Hisense has shown once again it can compete on picture quality, features and design while offering a more attractive price.

For its first 8K TV, Hisense has done an amazing job. The U80G 8K ULED TV is a brilliant first venture into 8K territory that demonstrates its technology can easily handle the jump to an even higher resolution. The result is simply stunning.

Telstra says it is now blocking more than 1.5 million scam calls per week