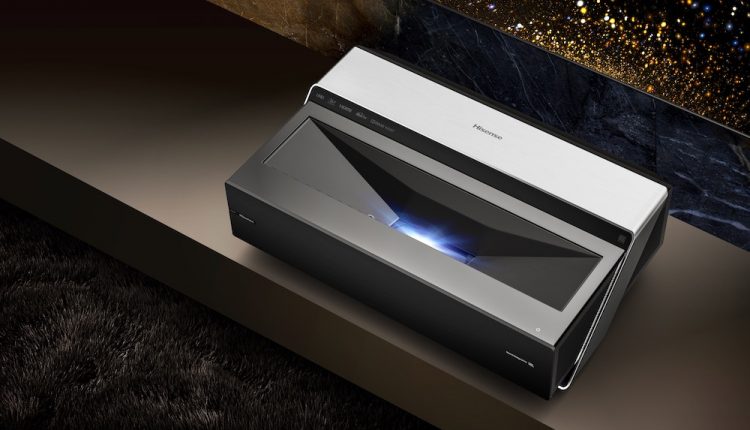 Customers are moving towards larger televisions but what if you wanted to go really big?  Like 100-inches? One way of achieving this is with the new Hisense Laser TV.

The beauty of this design is the fact it can be placed in the same spot where you would regularly position your television.

The unit also has built-in speakers and a TV tuner and comes with the special 100-inch screen that is mounted on your wall so it’s an all in one solution.

But what are your other options to achieve a 100-inch picture in your lounge room? 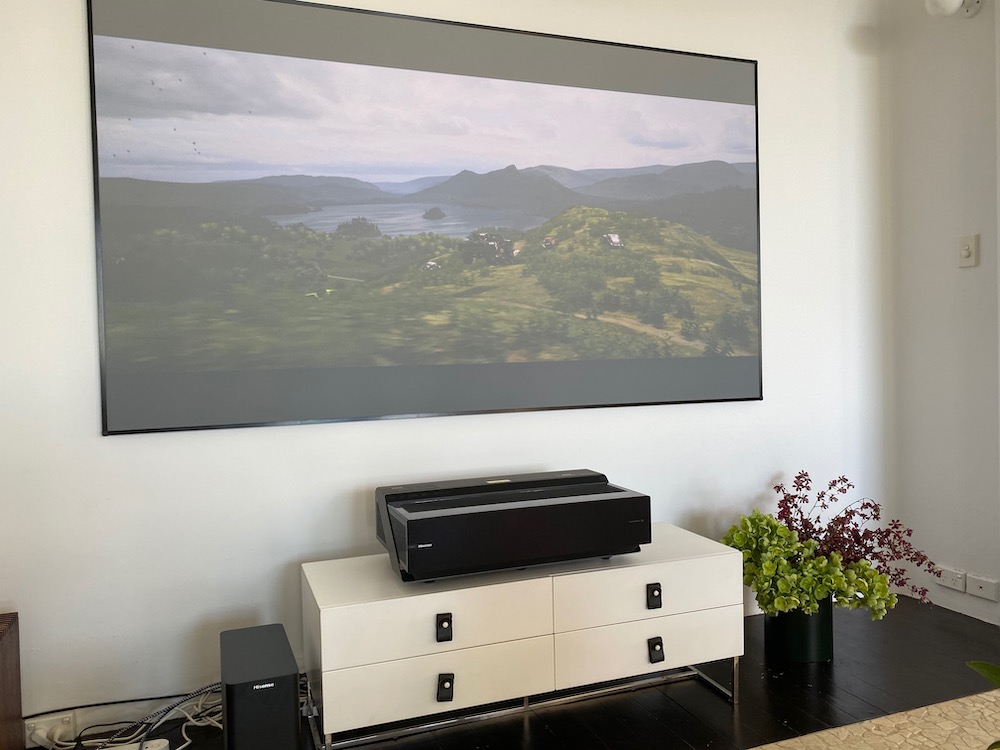 LG also has a 77-inch wallpaper 4K OLED that attaches to the wall magnetically for $21,799.

But none of these options are 100-inches.

To achieve an image of this size you need to turn to projection.

The Hisense Laser TV can be positioned between 20 and 30cm from the wall on top of your entertainment unit so it can beam the 100-inch image onto a specially designed screen that is mounted on the wall. 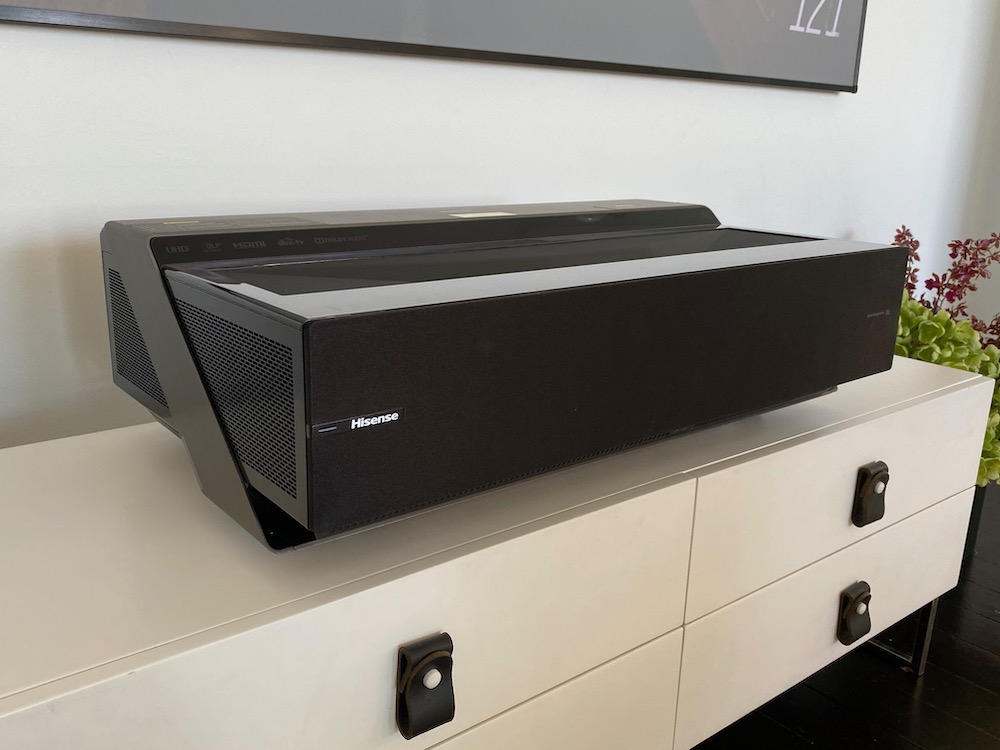 A regular 4K projector would need to be either positioned metres back from the wall and possibly ceiling mounted to achieve a 100-inch picture.

But what you don’t get with a regular projector are surround speakers and a TV tuner.

These need to be purchased separately and linked to the projector with a receiver.

Another thing you have to do is run cables from the projector to your sources as well.

If you add all these up you’re looking at close to $20,000 anyway if you wanted a decent set up.

It’s no ordinary customer who wants to have a 100-inch screen in their home and their budget would be significantly higher than your average person walking into an electrical retailer.

So for what Hisense is asking for its Laser TV puts it firmly in the ballpark and actually offers decent value.

So how does the Hisense Laser TV perform?

Being a short throw projector, the amount of light in the room plays a huge part.

Ideal conditions would be a completely dark room but if the Hisense Laser TV is to be used like you would use a regular television it needs to be viewable day and night.

For our review we saw the Hisense Laser TV set up in an ocean side home in the Sydney eastern suburbs.

We were able to view the TV in the morning and in the afternoon.

Facing east, the home had a lot of bright light pouring in and it made the Hisense Laser TV almost unwatchable.

We could make out shapes and hear everything okay but that the excess light in the room washed out the picture.

Any projector would have struggled in these conditions.

But our afternoon viewing was near flawless despite it being still a fairly bright room.

And of course, at night, the Hisense Laser TV really hold its own.

So the question you need to ask yourself before plonking down $20,000 is “would the Hisense Laser TV work in my home?”. 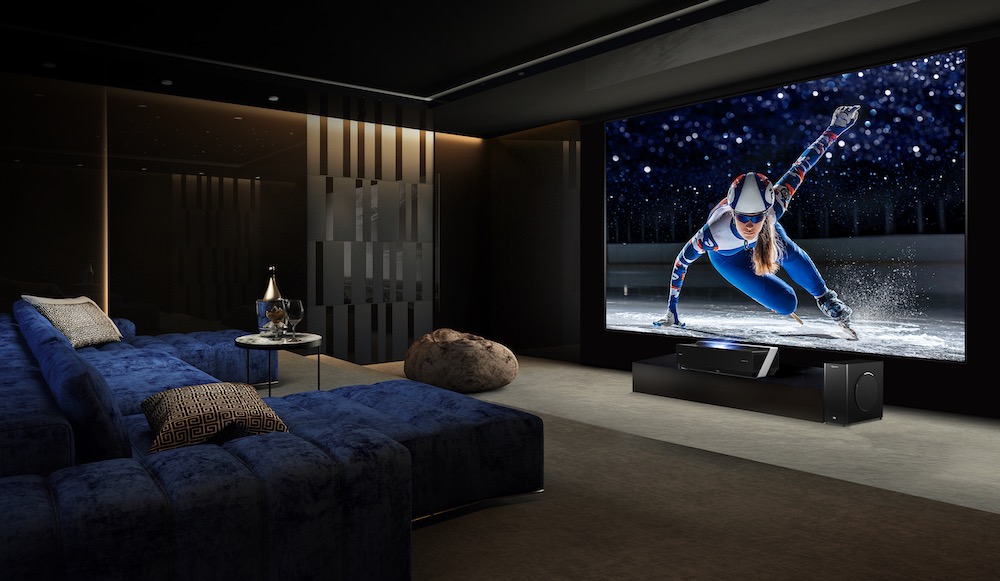 Australian homes have large open plan living areas along with large windows which offer a lot of light.

To make the Hisense Laser TV work all day – you would need to be able to draw curtains and control the  amount of light coming into your home.

A regular LED television would have no issue being viewed at any time of day or night thanks to its high brightness.

What helps the Hisense Laser TV maintain its image quality even with a lot of light around is the screen.

The screen itself actually has numerous tiny angled ridges on the surface.

These are designed to reflect the image towards the viewers in front of the screen.

Another benefit of this structure is to also reject any other outside light which may be above or off to the side. 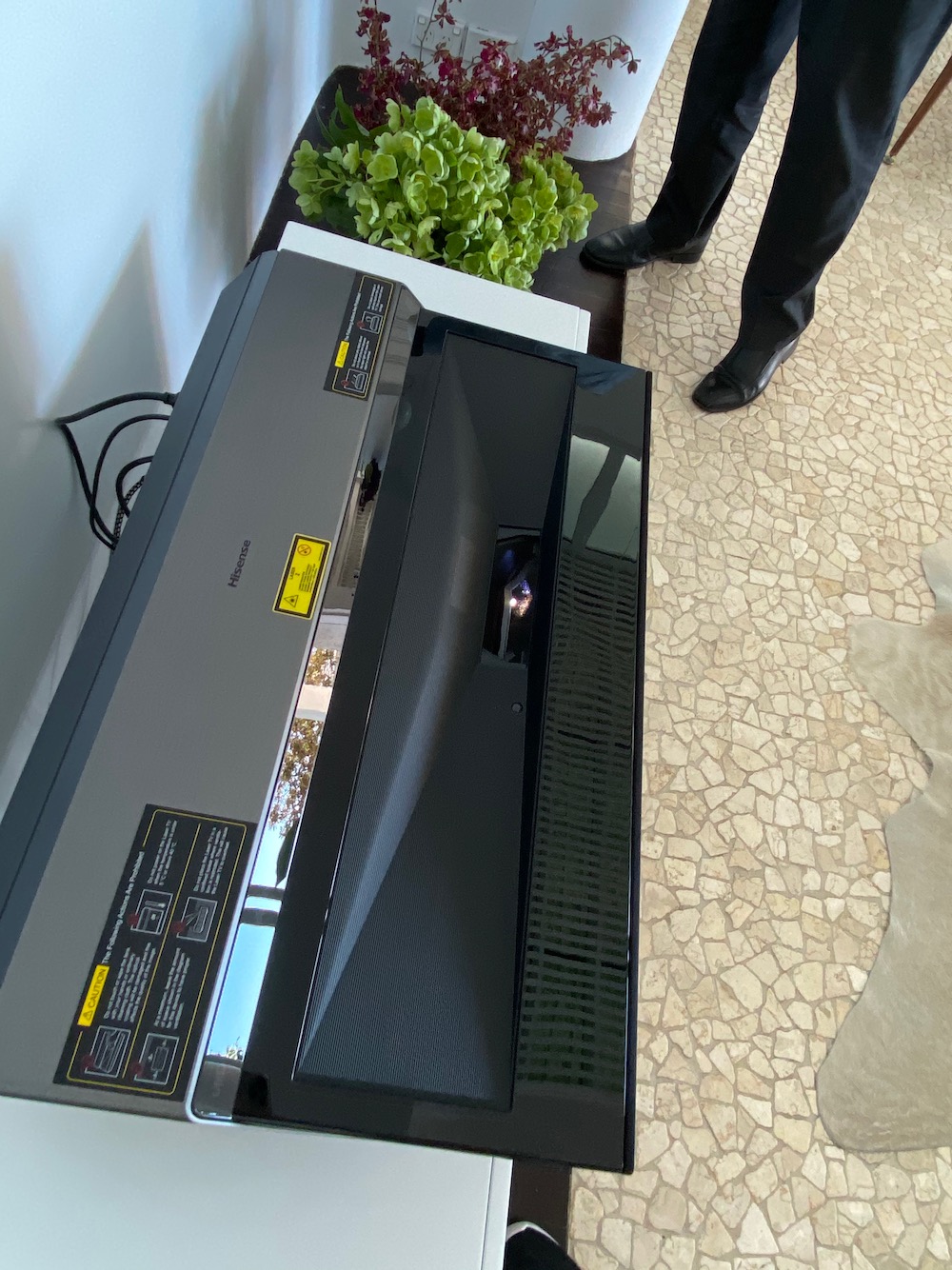 We switched on lights in the room and it didn’t have any effect on the image.

The only time the picture was less visible was when the light was shining directly on the screen from in front.

The beauty of the Hisense Laser TV is that it sits on your existing entertainment unit and requires no special mounts or placement.

The only thing that needs installing is the screen which is done by the retailer as part of the white glove service that comes with the price.

Also onboard is everything you’d expect from a television including a TV tuner, the Hisense TV operating system to easily navigate the menu as well as the four HDMI ports to connect your sources like a Foxtel set-top box, a gaming console and a 4K disc player.

Objects were sharp and clear and on-screen writing was really easy to read. 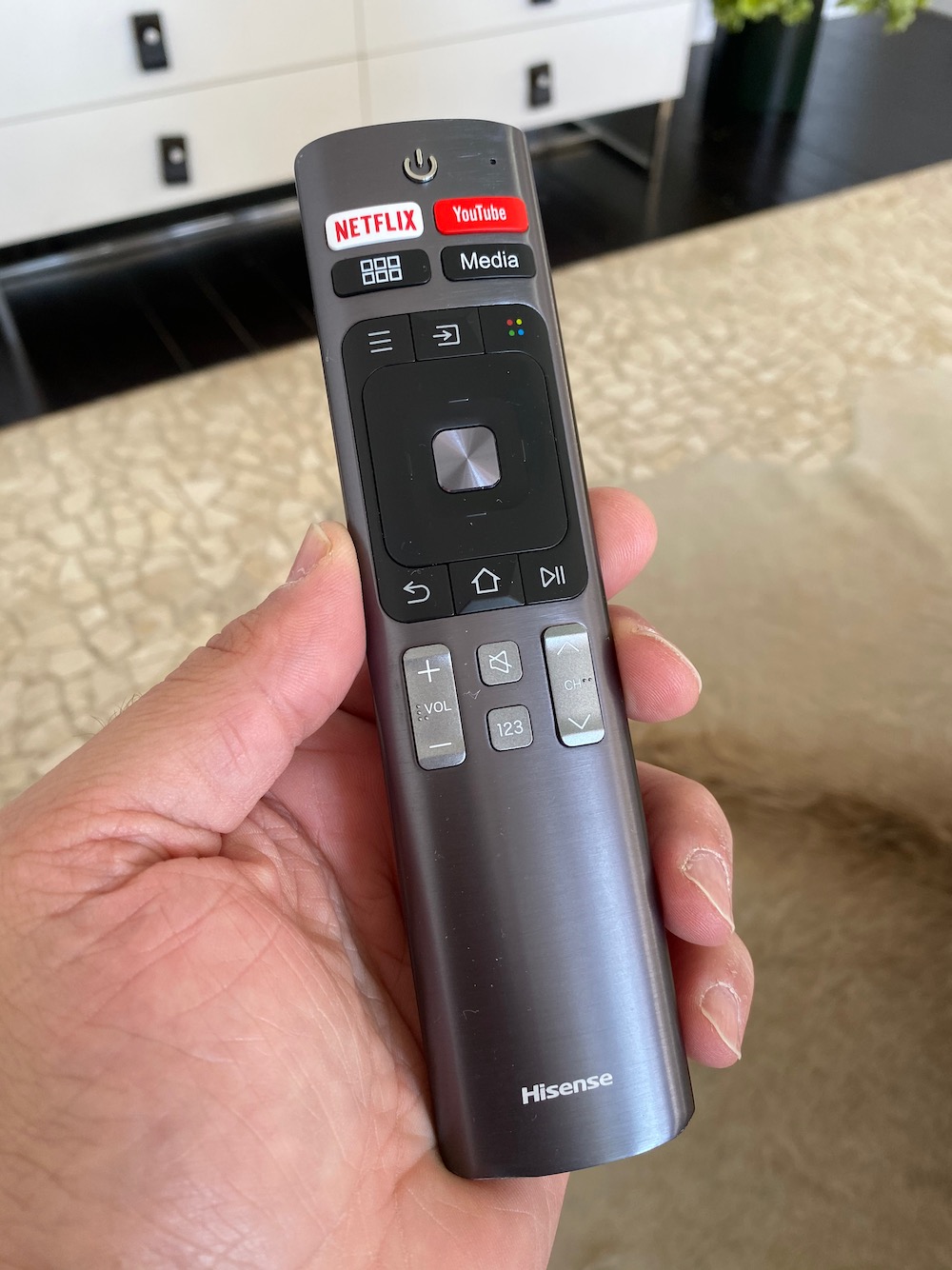 The black levels were also impressive but naturally this depended on the amount of ambient light in the room.

In a darker room, the black levels were superb.

The picture is generated through two independent lasers which are tuned to display a wide range of colours without over the situation.

Users can only access free to air TV through the Hisense Laser TV but also popular apps like Netflix and YouTube which are part of the interface.

One aspect which was really impressive was the sound quality.

The front of the unit has four speakers which are capable of creating a virtual surround sound effect.

We watched Star Wars The Last Jedi in 4K as well as some 4K Netflix programs on the Hisense Laser TV and we were extremely impressed by the picture quality. 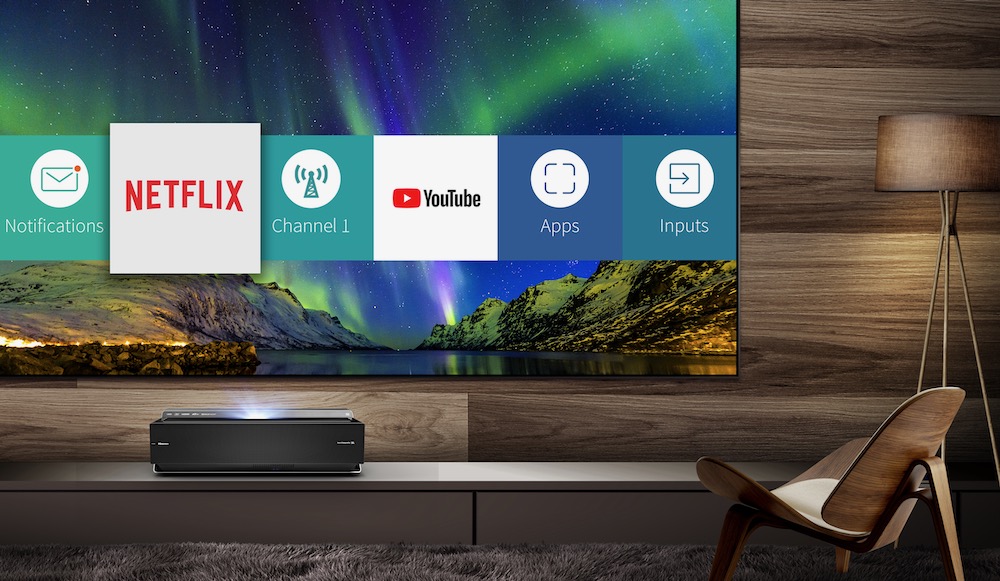 But what added to the experience was the amazing directional audio quality which sounded like we had set up speakers around the room.

There is a subwoofer included which sounded adequate. We would have preferred a heftier subwoofer to provide even greater bass and low-frequency effects but this one wasn’t too shabby.

The unit itself is quite large and can fit on your entertainment unit.

It also has some safety features built-in.

Whenever someone approaches the Hisense Laser TV the proximity sensor will turn off the laser to prevent any damage should anyone look directly at the light. 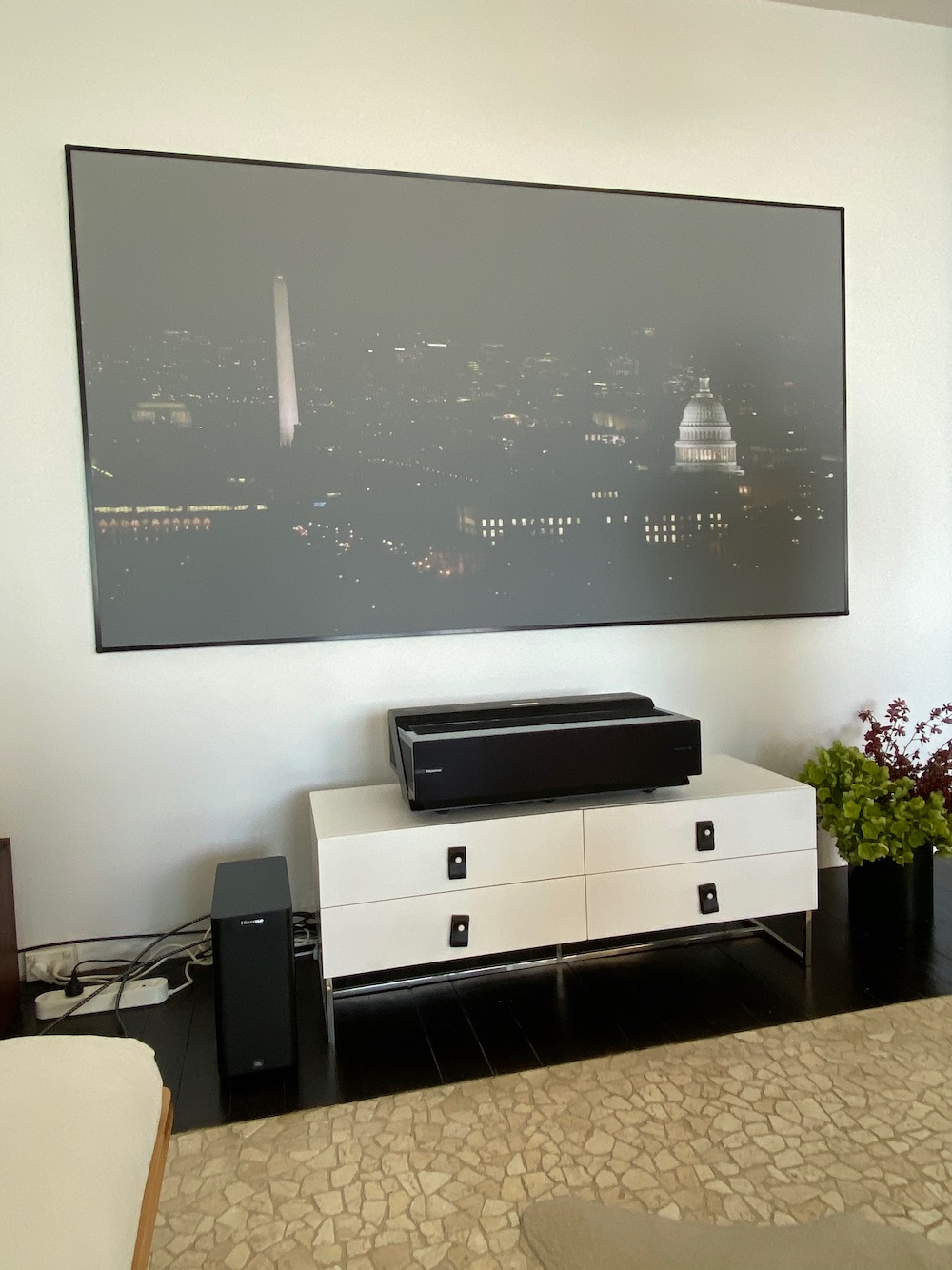 The laser itself is covered with a thin sheet of glass so you can rest assured any children in the household won’t be able to touch the sensitive parts inside or put anything inside the unit.

The Hisense Laser TV provides excellent viewing but priced at $19,999 it is not for everyone. But for that customer with the budget to afford that big screen experience at home and the right conditions then the Hisense Laser TV is a great option.