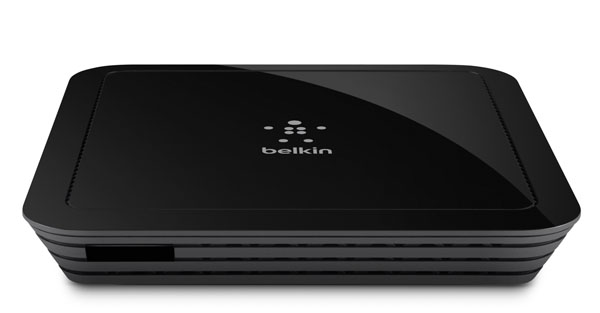 Wouldn’t it be good if you can take your TV anywhere with you? A new product from Belkin called @TV Plus can help you virtually do just that.

The device connects to your set top box, PVR (personal video recorder), pay TV box, DVD and Blu-ray player and allows the content to be accessed via a table or smartphone from within their own home network or remotely from the other side of the world.

The Belkin @TV Plus is a lot like the Slingbox – a device developed years ago and designed to do precisely the same thing.

But the major difference is that the Slingbox was released in a time when tablets were something we took when we were sick and smartphones were few and far between.

Belkin’s product has come along at a time when nearly everyone has a smartphone, when tablets are being adopted at a rapid pace and with more fast wireless and cellular connectivity than ever before.

The Belkin @ TV Plus is a small device about half the width of a DVD player. It is a 20cm square and about 4cm high.

It has a relatively featureless exterior apart from the component and Ethernet connections on the rear panel.

It also comes with a component and Ethernet cable and an IR blaster.

Setting up the Belkin @ TV Plus is relatively straightforward.

Users are taken through a well-illustrated guide that steers you through the process step by step.

The device has to connect to your set top box or recorder’s component connection and also to your home network with an Ethernet cable or through it’s built-in wi-fi.

The next step is to install the software on your Mac or PC computer and connect with the @ TV Plus.

For our review we hooked up the device to the Topfield TRF2470.

Part of the set up process was to find the set-top box or recorder you’re using on the @ TV Plus control software.

We didn’t find the exact match for the Topfield models because it is brand new but we were still able to find a matching code from a similar Topfield device.

This code allows users to control their set top box or recorder from their computer or from their tablet or smartphone.

What was also required in the set-up was an IR blaster that is attached to the bottom of the set top box near the Infra Red receiver.

The IR blaster – which looks like an LED at the end of a plastic strip – is attached with a cable to the port on the back of the @ TV Plus to allow the app to send through the IR signals to control the set top box or recorder.

There were more settings we had to adjust with our wireless router to allow a connection to be made from outside our network using a 3G/4G connection.

To its credit, the Belkin @ TV software told us precisely which settings we needed to adjust aboard the router to enable this connectivity.

The Belkin @ TV Plus, once connected, made accessing and even controlling the STB or recorder quite easy.

Once the standard or high definition signal is directed through the @ TV Plus to your tablet, smartphone or computer it takes a few seconds of buffering before you’re seeing a clear and sharp picture.

We found it quite smooth on a wi-fi network and clear most of the time when connecting via 3G or 4G.

It obviously depends on the signal strength where you are out but if you’ve got at least a couple of bars of reception you’ll see a relatively smooth stream.

Within our network, which has a strong wireless signal, it worked really well.

But if you’re out and about and want to access the @TV Plus in your home to watch a show or a recording you can do that from a wi-fi or wired internet connection in the next suburb or in another country.

What users will also notice are the controls at the top right hand corner of the screen which allows viewers to change the channel and even access their recordings.

And it’s not just about watching live or recorded programs from the set top box or recorder either.

It’s also possible to record directly to your mobile device as well.

Viewing the @ TV Plus content on your tablet or smartphone device requires the installation of a dedicated @ TV Plus app that works on iPhone and iPad and across all Android devices.

But what we found interesting was the fact that the tablet apps were free but the iOS and Android smartphone apps, which also allow remote wi-fi and 3G/4G connectivity to the @ TV Plus, were priced at $13.99.

The Belkin @ TV Plus provides a great way to connect to your TV and recorded content from anywhere.

Now you won’t miss that show or sporting event no matter where you are in the world.

Tune into Episode 13 of the top-rating Tech Guide podcast