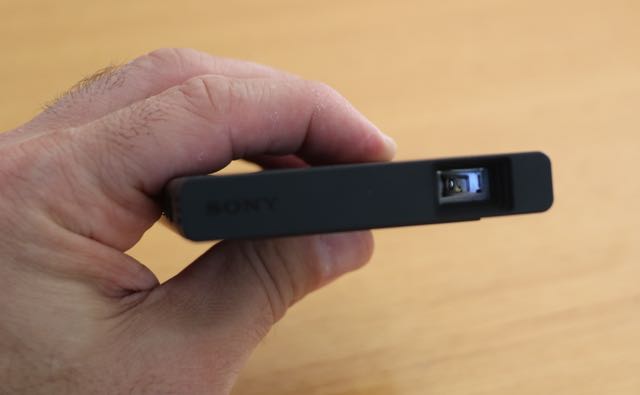 A projector provides a great way to enjoy your content on a much grander scale. But not all projectors are small enough to carry around – unless it’s Sony new MP-CL1 which is the size of a smartphone.

This is a laser projector which means it doesn’t have a bulky lens structure so it can be housed in a chassis that can literally fit in your pocket.

You can project an image up to 120-inches in size with a HD resolution of 1920 x 720 on any plain surface whether it’s a wall or a ceiling.

Sony’s MP-CL1 mobile projector can beam your favourite movies, TV shows, games, pictures, home movies or presentations from a variety of sources including your smartphone, tablet and computer. 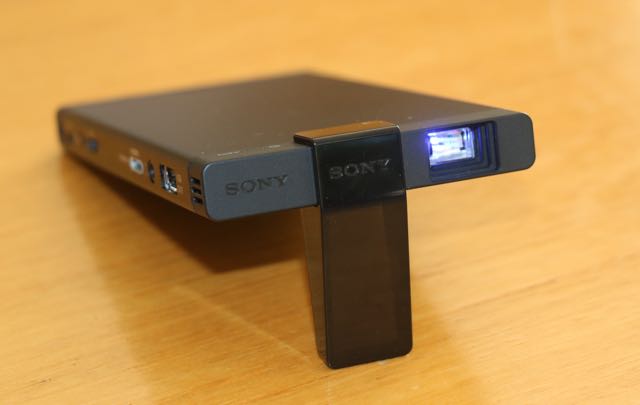 The device has a rectangular shape and is just 15cm long and 7.7cm wide.

It has a mini HDMI port that’s MHL (Mobile High-Definition Link) compatible so you can connect with mobile devices.

It comes with a mini HDMI to HDMI dongle so you can connect things like a DVD or Blu-ray player, a computer and even a gaming console.

For our review we connected our MacBook Pro which has a HDMI Out port to transfer whatever’s on our screen to the projector whether it’s your latest photos, a presentation or a movie.

It also has wi-fi onboard to enable Miracast wireless connections with compatible devices.

Unfortunately, there are a limited number of mobile devices and laptops that have this screen mirroring technology built-in including some Android smartphones and tablets

The iPhone and iPad can’t be connected like this because Apple want you to mirror their device screens with Apple TV.

The Sony mobile projector comes with a small clip-on stand so it can be positioned to beam the image upwards onto a wall.

The closer you bring the device to the wall the smaller the image. To get a bigger screen you have to march it back a couple of metres.

The throw length is actually quite short compared to a regular projector which has to be metres away to beam a larger image.

In terms of picture quality, we were pleasantly surprised at what we saw.

With a brightness of 32 lumens, the mobile projector’s image was clear enough to view even if the room isn’t completely dark. 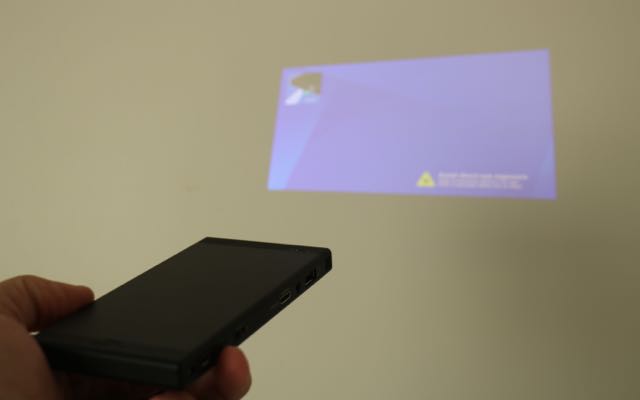 But don’t expect to see the picture very well in a well-lit boardroom, for example. You need to turn the lights down a little.

The colours were punchy and warm whether we were watching movies or viewing still images which is the result of the laser technology onboard that focuses tighter beams of light for each pixel.

And there’s no need to worry about fiddling to focus the image – it has built-in auto focus so the picture is always sharp.

It would have been even better if it had reliable automatic keystone correction as well – that’s when the projector corrects the picture into a rectangular shape instead of leaving two sides slanting inwards. 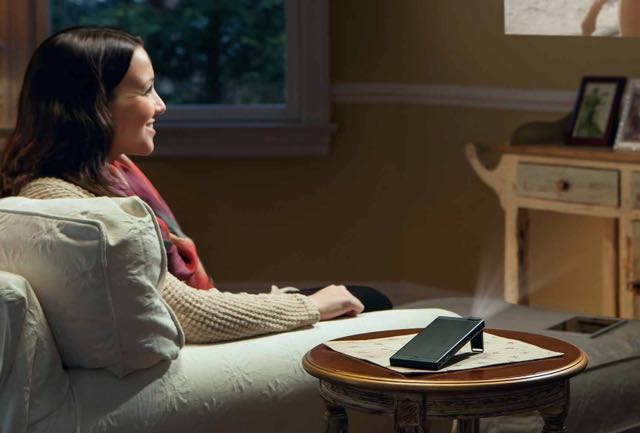 There is distortion correction circuit onboard but it didn’t do much to correct the image.

But the good news is it was pretty easy to correct manually using the onboard controls.

Sound quality through the small onboard speaker was average at best. The tinny sound didn’t do the impressive picture justice.

Unfortunately, there is no Bluetooth onboard so pairing a decent speaker just isn’t possible. You can save the audio experience by connecting a pair of headphones to the jack on the side.

The Sony mobile projector has a rechargeable battery that can be charged via the microUSB port and you’ll get about two hours of use before it needs to be recharged. 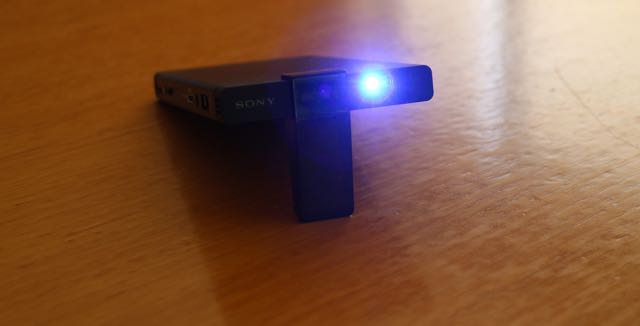 But the bonus feature of the Sony mobile projector is that can be used as a portable battery for your mobile devices.

There is a USB Out port on the side so all you need to do is connect your smartphones or tablet’s charging cable to get some juice.

It’s a shame that USB port can’t be used to connect a device or plug in a USB drive as another way to share your content through the projector.

The Sony MP-CL1 mobile projector offers impressive picture quality and is a handy way to showcase your content with a device that’s no bigger than your smartphones.

It is lacking a few features but that’s far from a deal breaker for this product which offers surprising quality and a convenient form factor.