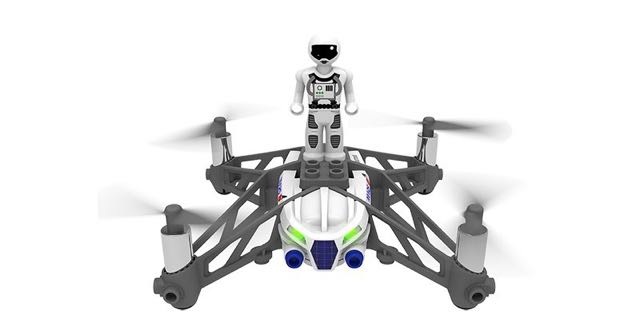 Drones come in all shapes and sizes but for those who don’t want a larger more expensive model, Parrot has a cool range of mini drones that are fun to fly and can be controlled with your mobile device.

For our review we took the Parrot Airborne Cargo Drone called Mars for a test flight.

The device is small and light – it has a wingspan of about 15cm without the propeller shields and 18cm with the shields with a weight of 54g and 63g respectively.

It links wirelessly via Bluetooth to your smartphone or tablet with the FreeFlight 3 app that’s available for iOS and Android.

From here you can access the flight controls and get flying right away. 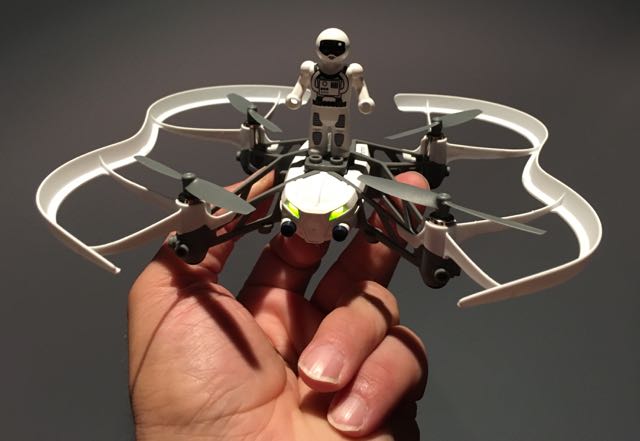 It doesn’t take long to master thanks to the intuitive app and its well-designed layout so that when you hold your device in landscape mode it puts the controls right under your thumbs.

Take off and landings are a breeze – there’s a dedicated control for that on the bottom of the screen.

As soon as you hit it, the Parrot mini drone comes to life and lifts gracefully off the ground.

From it here it goes up to of about 1.5m and hovers while it waits for you to take control.

The left controls offer elevation and sideways movement while the right controller is for your directions.

The craft is surprisingly nimble so give yourself plenty of space. It does have an autopilot function and a stabilisation system so that it flies smoothly.

Once we got the hang of it indoors, we decided to attach the propeller shields and try our luck outside.

The Parrot Airborne Cargo Drone is pretty light so it’s not advisable to fly it outdoors in a strong wind because it might get away from you and you could possibly lose it.

In calm conditions it’s fine and being outdoors gives you more room to perform some tricks like flips and rapid turns simply with a swipe of the app’s control pad.

And being the cargo model there is a Lego-like surface in the top so you carry some bricks or a little figure (one comes with the drone). But don’t expect to put anything too heavy on it.

Also on board is a small camera that points down from the base when you’re flying. The quality of the camera is pretty average but it’s still fun getting shots of the top of your head and your bemused pets. 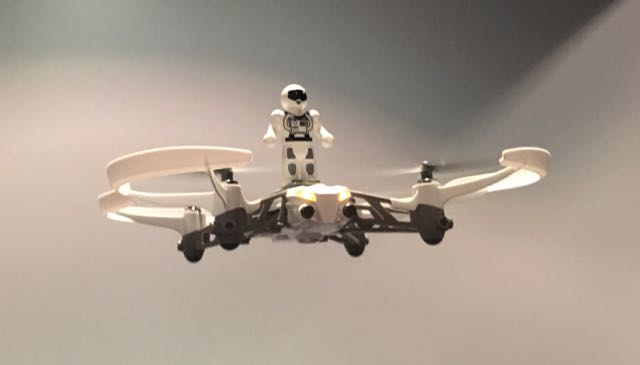 Pictures are stored on the internal memory and can be transferred from the drone to your mobile device with the FreeFlight 3 app.

Battery wise you can get up about eight or nine minutes of flight time before you need a recharge.

The good news is you can be fully recharged in about 25 minutes through the microUSB port on the back of the device.

If that’s too slow, you can buy a second battery and pop it in to keep flying while the first battery is charging.

Parrot’s Airborne Cargo Mini Drone is aimed at those customers who don’t want to spend a small fortune on a photography drone but rather on a product that gives them the sheer enjoyment of flying it. That product is the Parrot Mini Drone.

There are other Parrot devices in the range including other mini drones, the Jumping Night Drone, the Jumping Race Drone and even the Hydrofoil Drone.