Is it a phone? A camera? Something else? We could get bogged down with terminology but here’s what I know for sure: within minutes of firing up Panasonic’s DMC-CM1 I was capturing snaps that had eluded me for years because my iPhone camera could not manage a satisfactory result with the same subject.

First up, be aware it may take a while to get used to handling it. There’s no way to get around the fact the lens assembly protruding from the front of the camera feels very odd in the hand by comparison to the usual smartphone design in which a tiny lens is fit flush to the body. 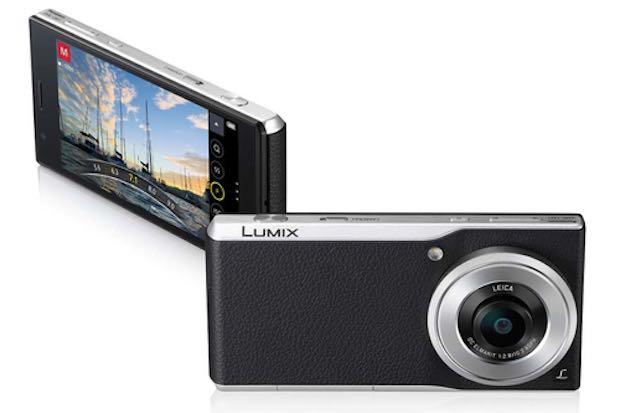 The power, volume, camera and shutter release button are located all along the top edge of the device, which feels right when you’re holding the CM1 as a camera in landscape capture but, at least for the first few times you grab it, those buttons feel a little awkward. However, don’t let it put you off.

You’ll get used to it. It sure is welcome to have a real shutter release button, which helps steady a shot (necessary as the CM1 has no image stabilisation) instead of having to poke the screen to fire it.

The smartphone side of this device is as fully functioning as any other device running Android, with a very capable Snapdragon 801 processor and 2GB RAM offering more than sufficient grunt.

I found all the phone and app functions to work fluidly and responsively.

The review unit was running Jellybean (5.0.2). As an iPhone user since Apple released its first model, I found it easy to make the switch. An iOS v Android discussion is beyond the scope of this review so I won’t go there. Suffice to say the snow wasn’t nearly as cold as I thought it would be the day I called at hell’s door.

Handling and smartphone features aside, the real star here is the camera and it’s scoring all the right points, and then some, for an imaging device that piggybacks a smartphone. Indeed, if it didn’t have a smartphone attached to it, it’d still be a nifty camera.

So, actually, it’s like, you know… an actual camera. That captures RAW. And JPEG if you like. Or both. You know, a c-a-m-e-r-a.

When I first took it out for a test drive, the results were very impressive. Among the first set of shots I took was a group of mountain bike riders at a trail head with signage. When I brought it home, converted the RAW and applied some enhancements, the image would not have looked out of place in a submission for an annual report or web site.

Not only did it have the quality in the image that would allow it to stand up to reproduction but it had something else quite important: spontaneity, of the sort that’s easy to lose when you pull out a big camera and people suddenly turn very shy.

It’s also a corker of a macro shooter. On the same day I captured the mountain bikers, I spent a couple of hours shooting close-ups at a favourite walking trail and was very satisfied with the results with the CM1 allowing for focus down to 10cm. Given that the clarity of images from the CM1 will stand up to some heavy cropping, you can pretend it focuses even closer than that.

It’s not all good news, though. The CM1 presents a few irksome issues, the biggest being battery life. The CM1’s spec sheet denotes a battery life of 300 still images and in use that pretty much bears out.

I flattened a fully charge battery in one session in under four hours. This shouldn’t be surprising. Combine a 1in MOS sensor, an autofocus drive, some sophisticated camera circuitry and a high-def LCD display with whatever comms you have enabled and it’s not hard to understand where the juice goes. You’ll want to bear this in mind if you need the CM1 to be a phone for the whole day. There can be no impromptu photo safaris at lunch if you still want to be contactable at dinner time.

You can shoot 4K video but, at 15fps capture, you will probably want to stick to 1080p captures for the most fluid motion capture.

Also, the stepped manual ring encompassing the lens was a feature I warmed to immediately because it lent a more “real camera” feel to the device.

However, its actions are tied to the last setting you specified on-screen such as aperture, manual focussing, shutter speed, ISO or exposure compensation. None of these are that much different to work with using the touch screen. I’m not suggesting the manual ring is useless. Just not as useful as you might first expect.

For some adjustments, such as exposure compensation in Program mode, it’s great. For others, such as manual focussing, not so much.

With that said, I’m yet to see better images from a smartphone. The level of control over the capture process combined with the quality of images make it easy to forgive its sins. Also not to be ignored is the CM1’s expandable memory.

Able to take a microSD card of up to 128GB, you have the ability not only to shoot a lot of frames but to manage your image library as you might do with a conventional digital camera by writing to the card, then shunting pics to a computer, then formatting the card after returning it to the CM1’s card slot. If you’ve ever found yourself having to tap-tap-tap to delete rubbish pics off your phone, you’ll appreciate the convenience of memory expansion.

For Instagram fans especially, the CM1 would be the most ideal shooter I can think of, not only for the imaging capability but adding captions and tags with swipe texting is a far superior experience to doing the same with an iOS device.

On the other hand, if you own a capable camera with Wi-Fi capability (which includes a lot of product these days) you could always shunt pics into a partner app on your existing smartphone and post images that way. Of course, then you’re faced with the double device dilemma. I think we can all agree that carrying two devices in order to post to Instagram or other social media can be a bridge too far.

For the record, I tried a session using my Lumix LX100 and shunted pictures via Image App to my iPhone and posted to Instagram. Aside from the hassle of pairing the phone to the camera repeatedly, it’s just as good a solution as using the CM1, arguably more so given the LX100’s excellent imaging capability.

That said, if you value being able to capture high quality images but can’t bring yourself to carry and pair a smartphone with a good compact shooter, then your mind should be made up. The CM1 is ideal.

I never thought I’d say that. Indeed, I can recall arguments I used to have back in the days of the first generation of smartphones when photographer colleagues would champion the convenience of a combined imaging/comms device. I resisted the urge to agree with them. Until now.

As a final word of advice, you will want to buy a good cover for this phone. I found myself constantly wanting to put a lens cap on that Elmarit lens but a cover is the best option, perhaps the only option. Also, the battery issue is a biggie.

If you’re a keen shooter, likely to bust out a big session with the camera, you will want to budget for an external charger to carry in the glovebox for those times your shooting sprees overwhelm the battery but you still need that phone to work after you’re done with the camera. That may be a big ask given the already hefty price tag for the CM1.

As of writing, the phone is only available to purchase outright, with no telcos offering the device on a plan.