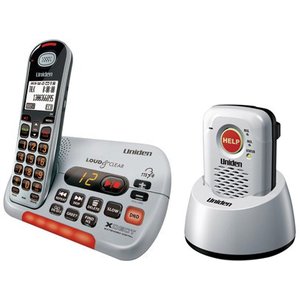 Uniden has released a digital cordless phone for the visual and hearing impaired which includes a pendant to contact loved ones in the event of an emergency.

The SS E35, which is bundled with a splashproof pendant, offers peace of mind for elderly and high dependency users.

The Uniden emergency alert pendant can be worn around your neck or strapped to your arm and can be programmed to call up to five numbers in the event of an emergency.

Once the large red help button in the centre of the pendant is activated it connects to the base station’s intercom to notify people in the house that help is required.

The pendant can also call up to five different numbers of your choice with the ability to easily move to the next pre-programmed number until someone answers.

Once a call is accepted, the user can talk through the pendant to the other person on the line.

Being splashproof, the pendant can also be worn the shower – an area where a slip or fall can be more likely to happen.

It’s also possible to add up to five pendants to the Uniden SS E35 so users can have access to the device in multiple rooms in the home.

There are no ongoing or monitoring fees to maintain the pendant’s connection and functionality to be able to place emergency calls.

The Uniden SS E35 is also designed for the visual and hearing impaired and has an extra loud ringer which is also useful for noisy homes and workplaces along with a visual incoming call indicator.

The handset has large and easy-to-read buttons along with a large display and can store up to 200 numbers in the device’s phonebook.

The Uniden SS E35, which includes the emergency pendant, is available now and is priced at $179.90.